The feature post follows this note from author Steve D’Antonio

Recently, while carrying out a pre-purchase inspection, I came across a checklist that the vessel owner had prepared.  It was one of several, including those for pre-getting underway, anchoring, and preparation for leaving the vessel unattended for an extended period.  I looked through them and one entry in particular caught my eye, on the one used before leaving the dock, it said “Check Steering”.  Having been aboard vessels that have lost steering a few times, this is something over which I obsess.  On one occasion, I was aboard a vessel that left the dock with the hydraulic steering crossover valve in the open position (a dock line had hooked onto it and was opened when the line was removed), effectively disabling the steering.  It made for some tense moments for all aboard, especially the person at the helm, as the rest of us fended off from anchors, pulpits and pushpits in the fairway.

The test is simple and quick, before casting off or weighing anchor, turn your helm from lock to lock.  The resistance should be what you normally feel, and the rudder angle indicator (if the vessel doesn’t have one use the autopilot’s rudder angle display feature) should register the movement.  If the vessel has been dockside for some time, take a trip to the steering flats area and have a look at the hardware, cables, rams, tiller arms and especially fasteners, put your fingers on them to check for any that might be loose.

Next, and again before slipping lines or weighing anchor, shift the engine into reverse and forward briefly, to make certain the shift mechanism is working properly.

Finally, if you are leaving a dock or slip, briefly actuate the thruster or thrusters to make certain they are operational.

Once you know these key systems work, you can get underway with greater peace of mind.

This month’s Marine Systems Excellence eMagazine covers the subject of fiberglass secondary bonds.  I hope you find it both interesting and useful. 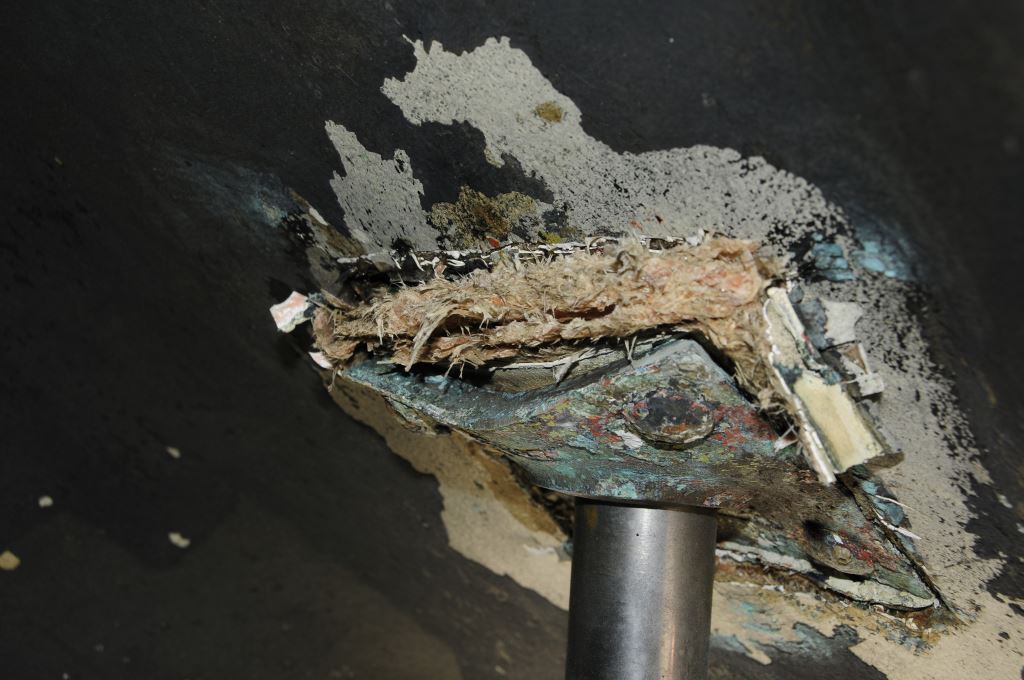 For highly loaded parts like this grounding-damaged strut, the importance of achieving a strong, reliable secondary bond cannot be over-emphasized.

I was in the midst of conducting a used vessel pre-purchase inspection a few years ago, when I encountered a textbook example of a failed secondary bond. I sat in the mid bilge area with the buyer and rested my rigging knife on a shelf that had been recently installed to support a large battery bank; hold that thought.

When a FRP – in the industry ‘fiberglass’ is often abbreviated as FRP, which stands for ‘fiberglass reinforced plastic’ – boat is built including the hull, and cabin/deck structure, the “parts” are made using resin and fabric reinforcement. The former may be polyester, vinyl-ester or epoxy, while the latter can range from traditional glass fabric called “E glass”, in various weights and weave patterns, to exotics such as Kevlar and carbon fiber. 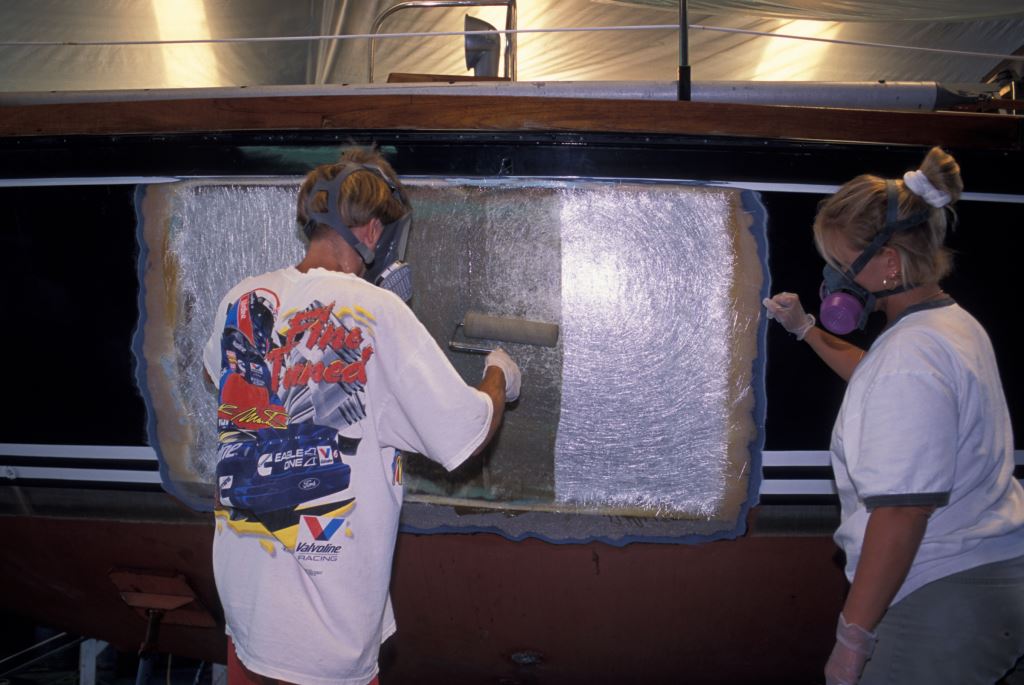 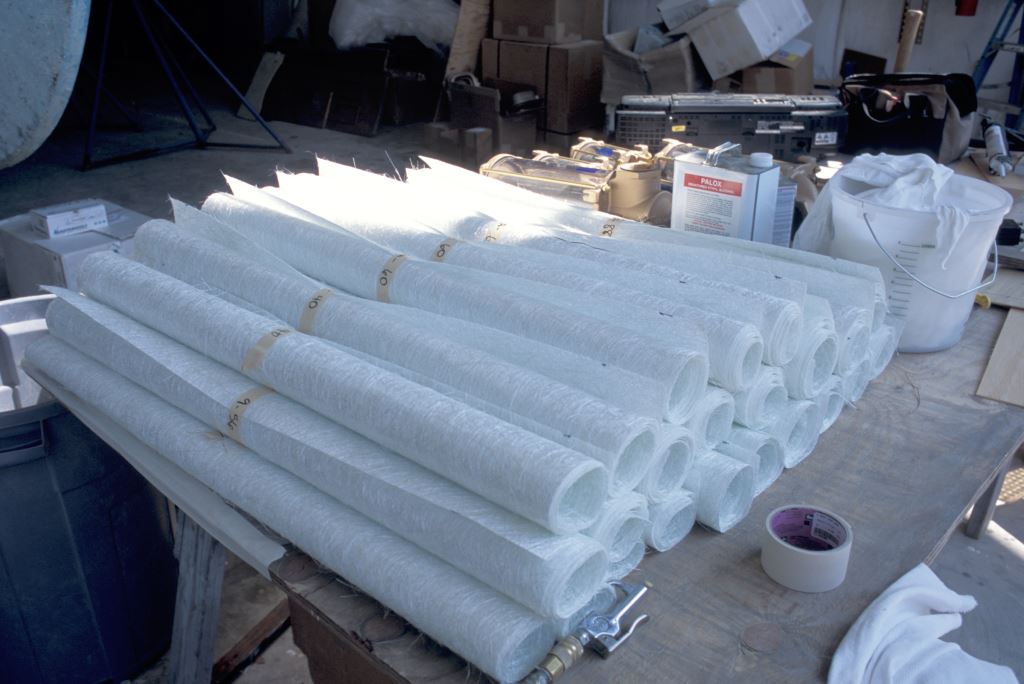 Fiberglass is a simple combination of fabric and resin, each successive layer adding strength and stiffness.  Primary bonds are achieved when the resin is not fully cured, with secondary bonds coming into play after the substrate is no longer “green”.

Regardless of which materials are used, the traditional construction of these parts is accomplished in such a way that the resin used for each laminate (a laminate is a single layer of resin-saturated reinforcement) is applied before the previous laminate fully cures, it’s referred to as being “green”, like unripe bananas, establishing a chemical, or cross linked resin polymerization, connection with the laminate beneath. This is a primary bond, and it’s the most desirable as it is especially tenacious. 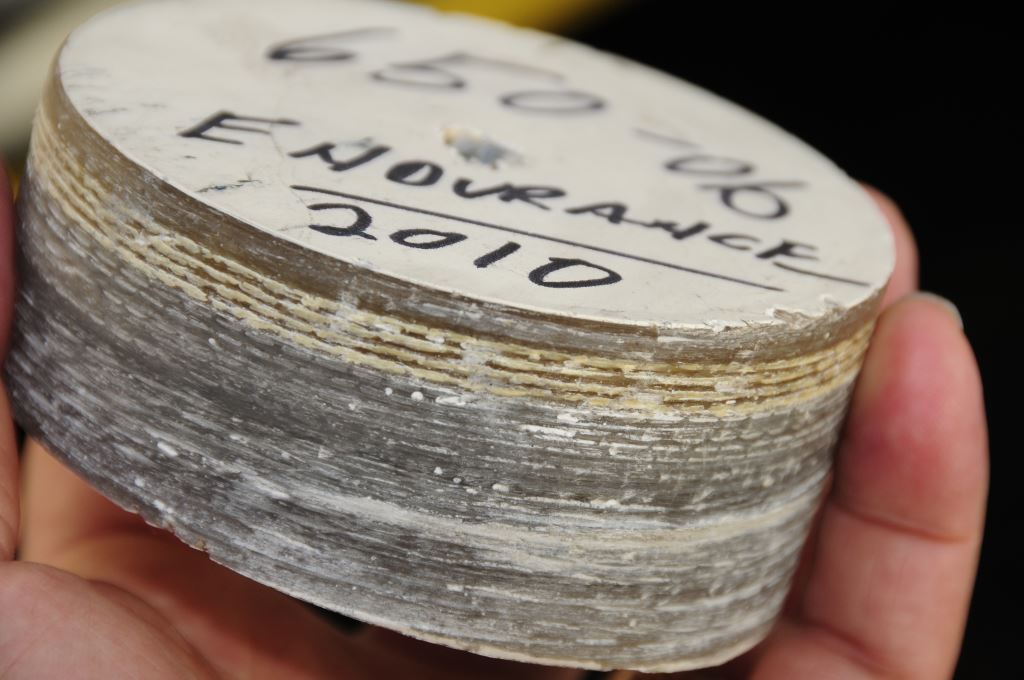 Each laminate is a separate layer of fabric and resin, which looks somewhat like tree rings when section cut.  The one shown here includes four layers of Kevlar.

Virtually every other fiberglass component or structure added to the hull or deck after the initial, primary layup, utilizes what’s known as a secondary bond. Secondary bonds differ from primary bonds in that they rely on adhesion, or mechanical bonding, rather than establishing a chemical matrix. Components that are fiberglassed or “tabbed” to the hull and deck in this manner include stringers, engine beds, shaft logs, structural bulkheads, thruster tubes, structural shelving that supports machinery like generators, and hull to deck joints that are glassed from the inside after being joined. That’s a short list, the average 40 to 60-foot power or sailing vessel can have anywhere from a few dozen to several score or a hundred or more secondary bonds. 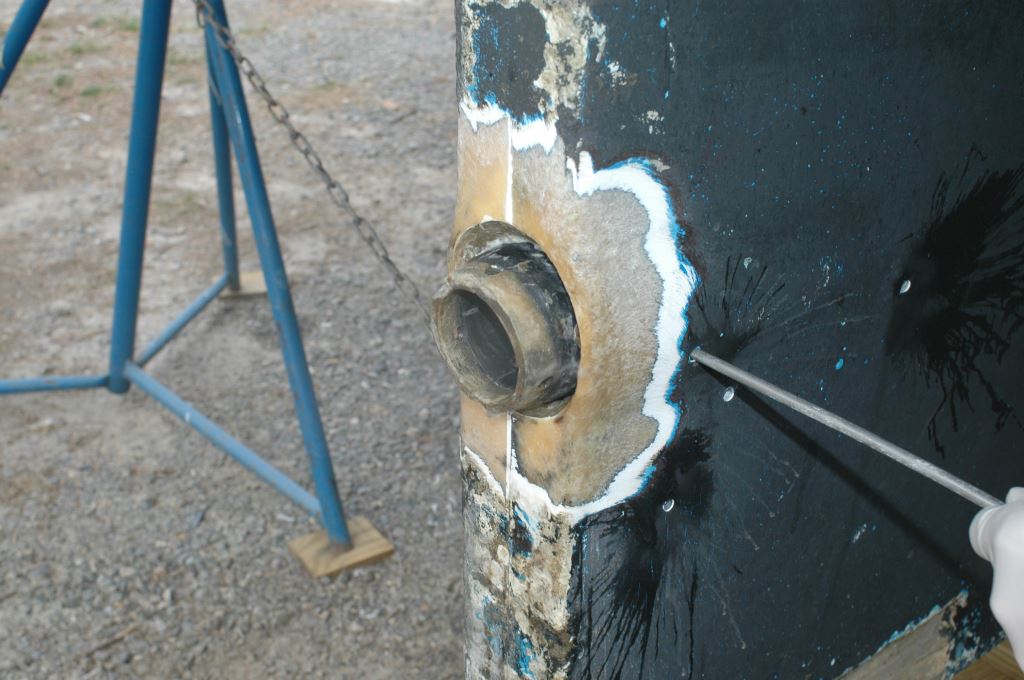 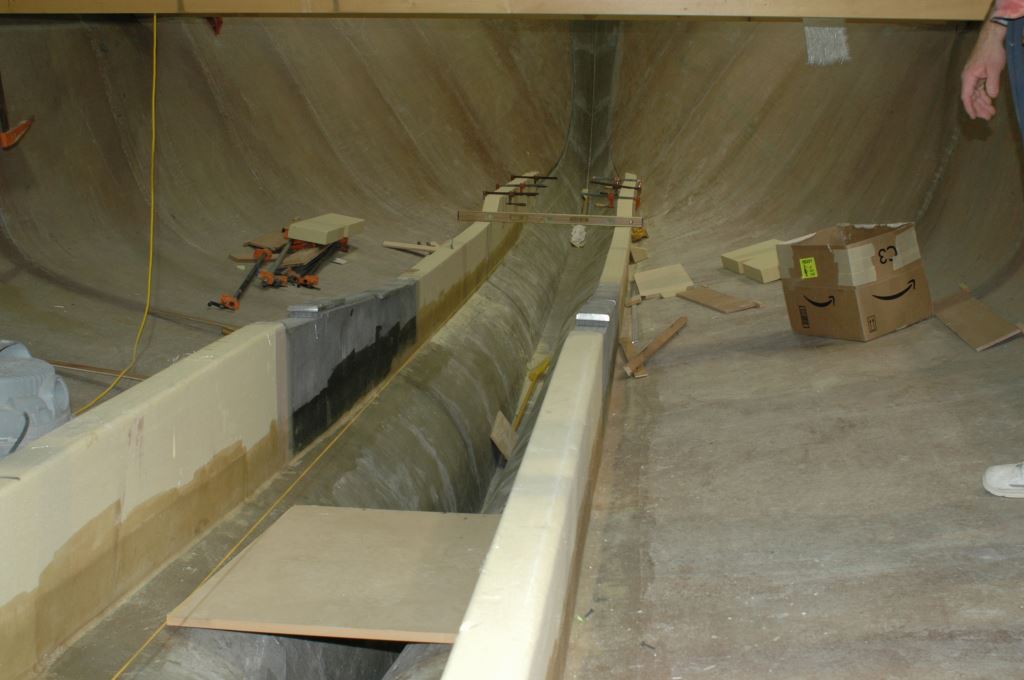 Unlike primary bonds, secondary bonds rely on achieving a good “grip” onto a fully cured FRP surface. As such, that surface requires special treatment, it can’t be smooth, slick or contaminated with salt, oil, grease, silicone, paint etc. As the adage goes, preparation is everything and secondary bonds are no exception. Grinding or sanding is the primary means by which a secondary bonding surface is prepared; this usually involves the use of a very aggressive 80 grit sand paper, which will leave the surface rough, while exposing filaments of glass reinforcement, a surface feature that is ideally suited to enhancing adhesion. If using an electric or pneumatic grinder caution must be used to avoid overheating the surface, which could damage the existing resin. Pneumatic sanders can also contaminate surfaces with oil. For small jobs, hand sanding is often good enough. If the surface is gelcoated, all of the gelcoat must be fully removed in the area to be bonded. Under no circumstances should you attempt to bond to gelcoat, as its own adhesion to the fiberglass substrate is not nearly tenacious enough for structural tension or shear loads. 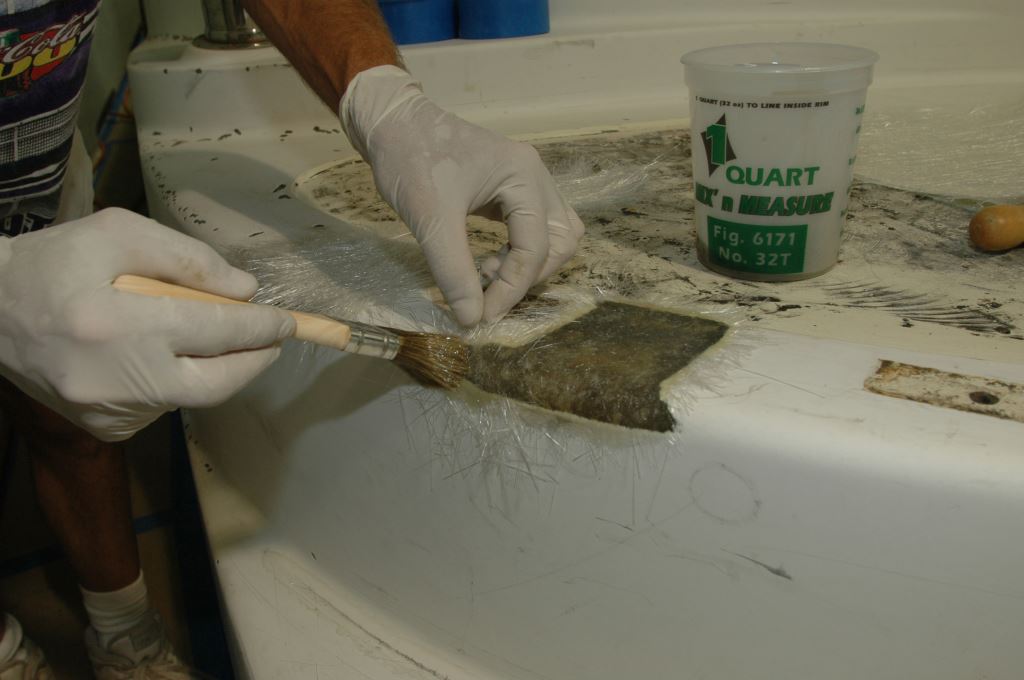 In order for a secondary bond to be reliable, the surface over which the resin and fabric are applied must be properly prepared.

You might be asking, ‘why should I care about the nature of secondary bonding, my boat has already been built?’ There are two cases where knowledge of secondary bonding is critical. The first involves the installation or addition of equipment. Say, for instance, you are installing a tank under a berth and need to install a shelf on which it will rest. The loads imparted on that shelf, with a full tank, in a seaway, could be considerable; it must be secure, and only a proper secondary bond will achieve this end.

The other case involves repairs from collisions, groundings etc. All fiberglass repairs rely on secondary bonds; if the aforementioned procedures are not carried out correctly, the result could be a failure, one which will almost certainly occur when the structure is most heavily loaded, in heavy weather, or a grounding. 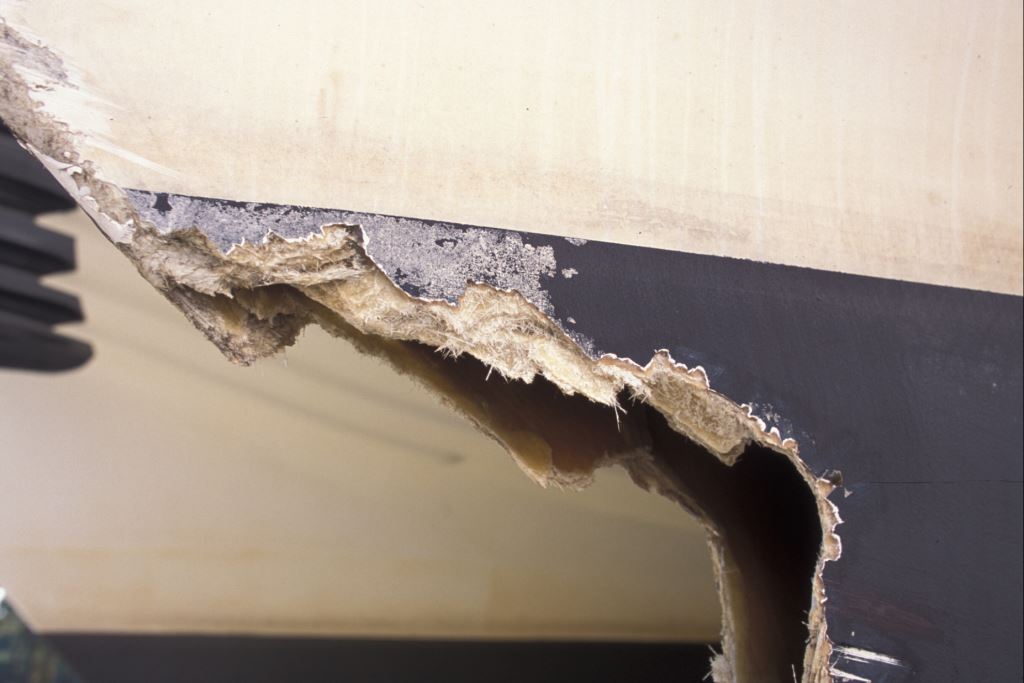 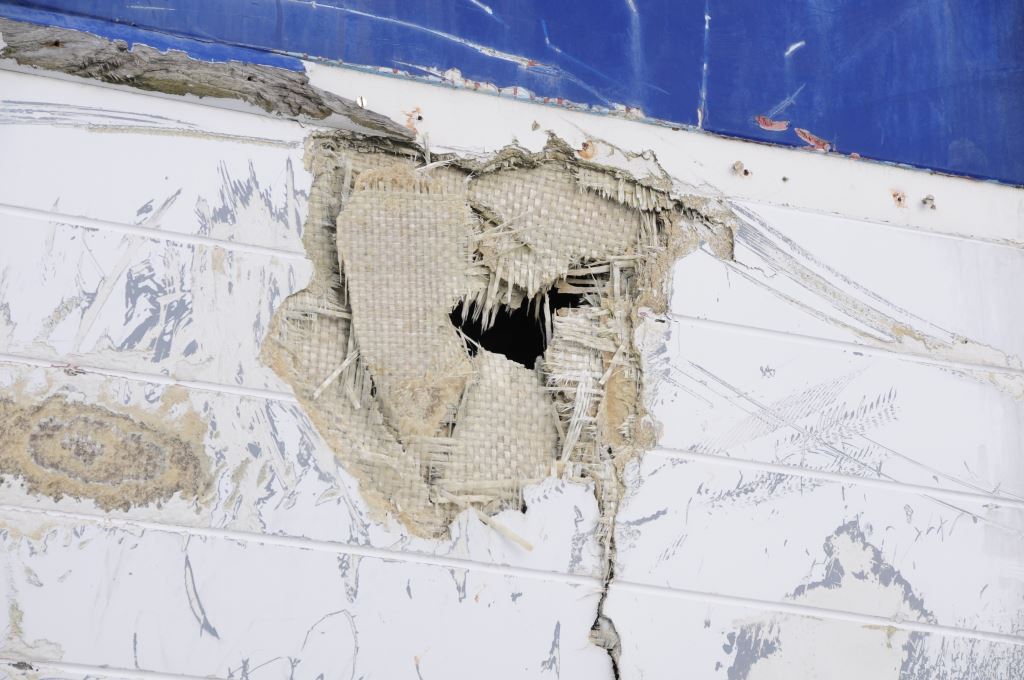 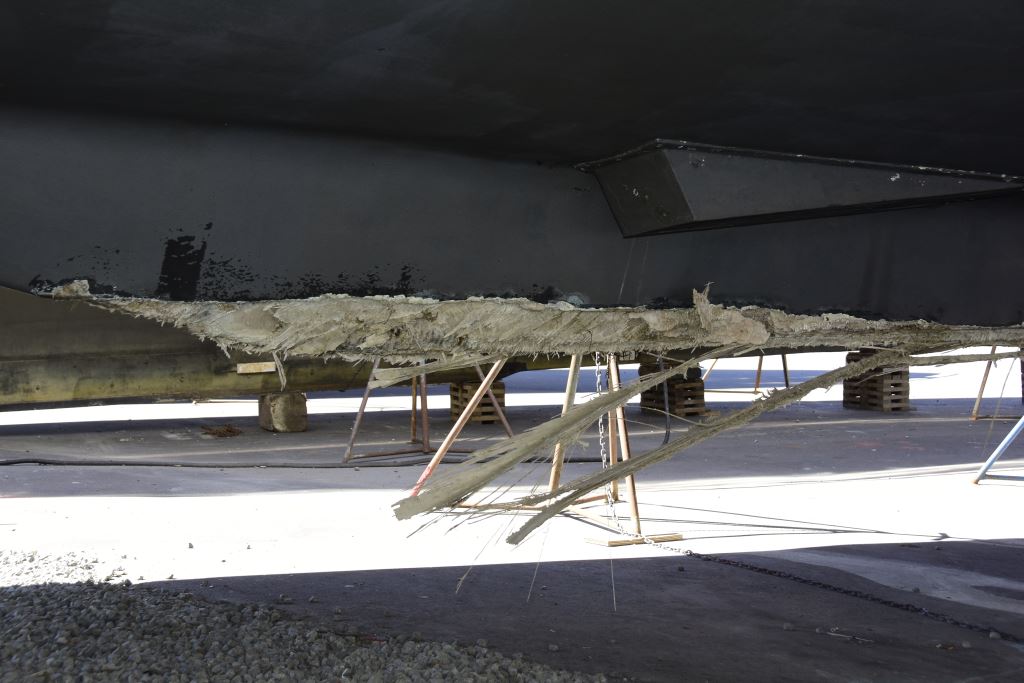 Collision and grounding damage, this will require secondary bonds to effect repairs.

In the case of repairs, once all the damaged laminate has been removed and the region has been carefully shaped and tapered, all sanding residue must be removed, and the area wiped down with acetone or denatured alcohol. Then, the laminate is tapered in much the same way a scarf is made in a plank, using a gradual slope. In some cases, this is done from the inside and the outside of the hole creating what’s essentially a large diameter, FRP rivet.

Additionally, the tenets of fiberglass repair dictate the following, the repair should as closely as possible mimic the original laminate schedule, duplicating the fabric reinforcement type, thickness and orientation. Where repairs are concerned, more laminate is not better, as it can have an effect on load distribution, and the creation of stress risers. Additionally, the resin used should be of equal and preferably greater adhesive strength than what was used originally; that usually means vinyl ester or epoxy. When it comes to FRP repairs, it’s usually the quality of the work at the interface between old and new laminate that determines success. 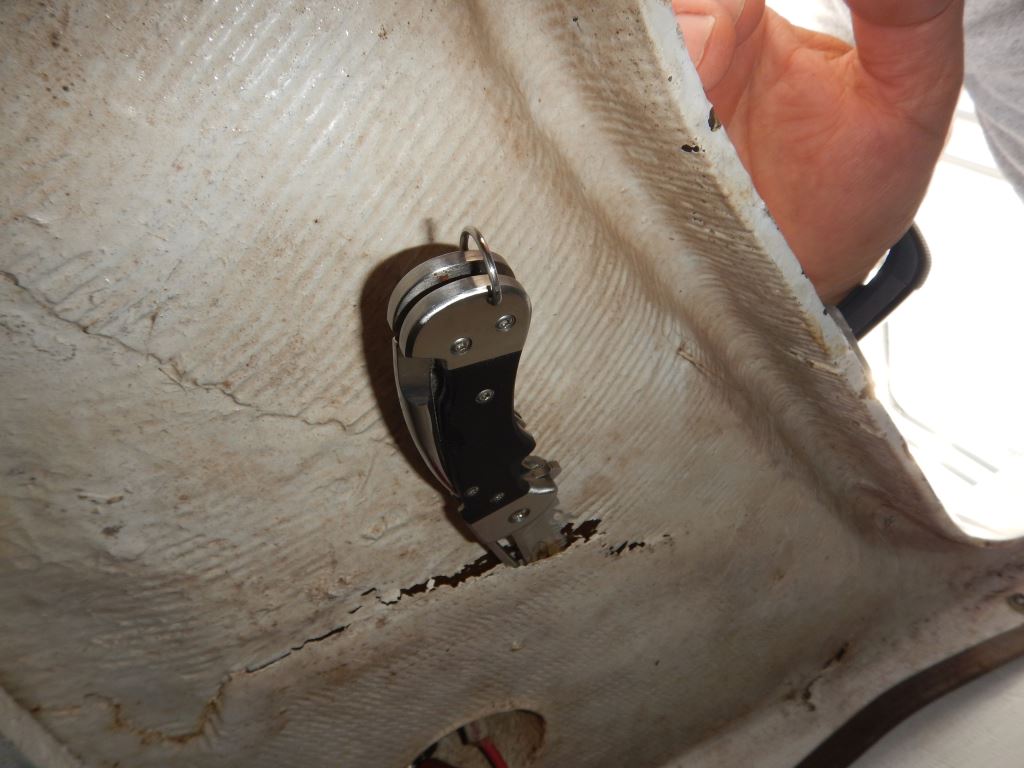 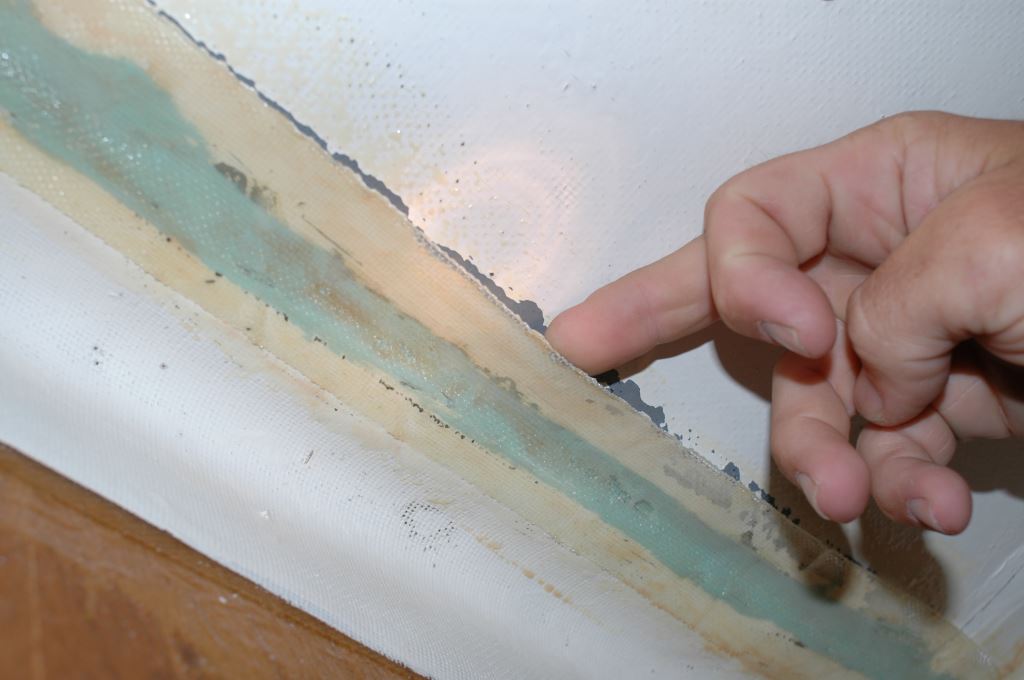 Failed secondary bonds are not uncommon, they are almost always the result of poor or improper preparation.

The Rest of the Story

I moved my knife to the edge of the tabbing that supported the shelf, and then easily drove the point under the edge of the tabbing, separating it from the inside of the hull. It was clear to see that the surface, which was gelcoated, had only been lightly sanded, leaving no effective “tooth” for the tabbing’s resin to lock onto. It would have to be torn out and completely redone. ‘Better, however, to make that determination now’, I said, ‘than while you are pounding into a head sea, with 800 pounds of batteries knocking around under the bilge, and…before you own the boat”.