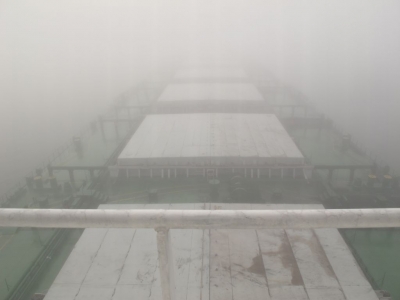 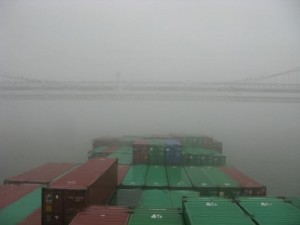 Your perspective changes when the weather turns foul or the fog rolls in. You may know where you are, but knowing who else is out there becomes a much bigger problem.

Being underway when you can’t see is one of the more stressful aspects of boating.  You can be sure that professional mariners feel no differently when they find themselves in fog, rain or snow.  It can be downright scary.
Some of that anxiety can be ameliorated if you are educated in the proper use of radar, and have a voyage plan that directs your actions at such times.  The simplest and safest approach is to sit at the dock until weather conditions improve.  You may be a late arrival at your destination, but you will arrive intact.
With today’s electronic chart capability making navigation so much easier, the likely inclination is to go.  Electronic charts can be a siren’s call to trouble or, if used properly, an asset in avoiding a collision with commercial traffic.  If you have the sea room, giving shipping channels a wide berth is a good idea.  On Chesapeake Bay, the ships like to run in the deep water on the eastern side of the Bay.  This does not mean that all ships will be over there, but there will be less ship traffic elsewhere.  On Chesapeake Bay, you are certain to find tugboat traffic west of the deep water.
Looking at the chart, you may be able to run your voyage plan in fairly shallow water, for example, 20 feet or less.  This would reduce the likelihood of meeting commercial traffic.  Study your charts. Buoys set close together may indicate an area where you could expect to see commercial traffic.  Mid-channel buoys indicate that commercial traffic will pass them on one side or the other.  Don’t go there!  Anticipate ship movements.  Ships are going to pass under the center span of a bridge.  They are going to turn into the next leg of a channel.  We all try to adhere to the Rules of the Road, but your survival is at stake.  Govern yourself accordingly and move out of the way. 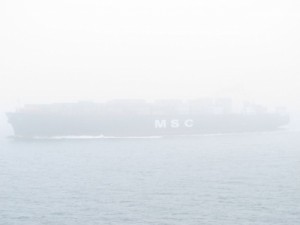 This ship was photographed on a particulaly foggy day in a moment when the visibility actuallyimproved.

On Chesapeake Bay, ships and tugboats are monitoring VHF channels 16 and 13.  Channel 16 is the hailing and distress frequency.  Channel 13 is the ship to ship frequency.  On inland waters, if you want to communicate with commercial traffic, and I recommend it, use VHF channel 13.  In pilotage waters, when communicating with each other, we rarely use latitude and longitude to identify our location.  We use buoy numbers or geographical location.  You might say, “This is the motor/sailing vessel Rising Tide southbound at number 78 buoy calling the northbound vessel in the vicinity of Cove Point.”  If I’m that northbound vessel, I’m going to answer you.  In limited visibility, it is also good practice to announce yourself periodically on VHF channels 13 and 16.  You might say, “Securite, Securite, Securite, this is the vessel Rising Tide southbound at buoy number 78, speed 7 knots.”  The commercial traffic is listening and will anticipate your vessel’s movement.
This is not an article about radar plotting, but suffice it to say that if you have a target whose relative bearing is constant and closing, you are in a collision situation.  If you are the give way vessel, you should take early and substantial action.  Substantial means that your action is readily apparent to the opposing traffic.  You want a large Closest Point of Approach (CPA).  Ships at sea typically use 2 miles as a CPA with commercial traffic.  This may be impossible in your circumstances, but the point is to give yourself a safe margin of clearance with the other vessel.  Remember, you may be dealing with a behemoth 1000 feet or more in length!
Speed is a huge factor in collision avoidance.  A fast target makes it imperative for the give way vessel to act meaningfully.  For example, if you are the give way vessel traveling at 7 knots and the stand on vessel is moving at 15 knots, you must be prepared to take early and substantial action quickly to avoid a collision.  In my own experience as pilot, I have found that one of the best courses of action for a recreational vessel is to simply stop and let the ship maneuver around you.  If you are in a restricted channel or a sea lane – get out of the way, if possible.

The Automatic Identification System (AIS) is an excellent tool for collision avoidance.  All international commercial vessels of 300 tons or more are required to carry an AIS Class A system.  AIS will give the user such valuable information as vessel name, course, speed and CPA.  However, this does not excuse you from using other means to determine if risk of collision exists.  If installed, a Class A system will greatly increase the likelihood of your vessel’s being seen by commercial traffic.
Most recreational vessels that have AIS installed on board use AIS B.  It is not as precise as AIS A, and vessels with AIS B may be intentionally filtered out by commercial traffic.  What is important here is the information you can obtain, such as the opposing vessel’s name.  Then you may call them on VHF channel 16 or 13. 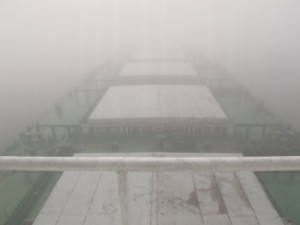 There is a bow to this ship, somewhere out there. When visibility is this bad, pilots can only hope that small recreational craft stay clear.

Know and understand your equipment.  Without question, I can fine tune a radar system better manually than using the auto function.   Practice your radar collision avoidance in good visibility, and have a clear understanding of the Rules of the Road.  Know the proper whistle signals.
In restricted visibility it is unlikely that a ship will hear a recreational vessel’s whistle signal in enough time to avoid a collision, so your radar signature is important.  I highly recommend the use of radar reflectors.  It is important to know that your vessel presents a good radar signature.  Be aware, however, that a large swell or heavy rain, and the clutter adjustments on the radar will adversely affect the radar signature of your vessel.
If you are out at sea and find yourself in a potential collision situation, call the opposing vessel on channel 16.  The fact that VHF transmissions are line of sight should alert the other vessel that you may be close to them.  In this situation, it is useful to use latitude and longitude in identifying position.  It’s not comforting, but ships at sea may not answer you, and if they do, you may not understand what they are saying.  Most of them are using the 6 to 12 miles scale on the radar.  They may have the Automated Radar Plotting Aid (ARPA) set on auto acquire, and an alarm will sound when a target moves into the zone.
If you are a coastwise cruiser, it is good practice to identify areas where commercial traffic will pass close to the coast, such as the Florida Keys or Diamond Shoals Lighthouse. Finally, it is essential to act if you feel that your vessel is in a collision situation.  Fear, stress and especially fatigue can hamper judgment.  In addition, the fact that you are unable to visually see the danger closing with you may cause you to go into denial that potential catastrophe is real and imminent.  Remain vigilant and focused.  Without confirmation, never assume that the other vessel “sees” you. 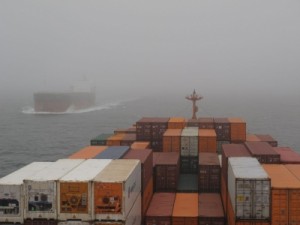 When approaching another vessel head on, closing speeds can be surprisingly high.  Low visibility seemingly amplifies this effect.

Bill Band has been a member of the Association of Maryland pilots for nearly four decades. A 1971 graduate of the State University of New York Maritime College at Ft. Schuyler, earning a B.S in Marine Transportation, Bill began his career as a Mate on the Cape May Ferries, which in the 70’s were 3500 ton steam ships. He then went on to work as Mate on the pilot boat Baltimore, a 200-foot station vessel at the Virginia Capes. He holds licenses as Inland Master, any gross tons, 3rd Mate Oceans, and First Class Pilot any gross tons for the lower Delaware Bay, the entire Chesapeake Bay and tributaries, and the C&D Canal. Bill estimates he’s piloted over 4000 ships in his career and spent over 40,000 hours doing it, ranging from tall ships to 1200 foot cargo vessels. He is an avid recreational boater and owns a Monk 36 named Brighter Days.