The following monologue was written by a colleague of mine, a 30+ year veteran Chesapeake Bay Ship’s Pilot.  On two occasions I’ve had the pleasure of accompanying him as he guided ships from the mouth of the Chesapeake Bay to Baltimore. I never tire of watching him work, handling ships whose draft is often greater than the length of the vessels many of us cruise and sail aboard.

I’ve known Captain Bill Band for many years and hold him in the highest regard as both a professional mariner and highly competent ship handler.  With his permission I’ve decided to share this story with my subscribers, for its maritime educational value and because it’s simply a great sea story.  I hope you enjoy it as much as I have.

If you have more interest in his work you can read the article I authored on this subject for PassageMaker Magazine www.passagemaker.com published in the March 2008 issue.

I’ve inserted a selection of photos into the following story, taken during my passages with Captain Band.

All in a Day’s Work

February 5, 2010 held a forecast for a midatlantic perfect storm and didn’t disappoint.  At the Port of Baltimore’s Atlantic terminal I boarded the M/V Hoegh Kyoto outbound for sea.  The Hoegh Kyoto is a car carrier ship 600 feet long, 106 feet wide and 30 feet in draft. She can transport about 5000 automobiles. These particular ships also have tremendous sail area.  The Hoegh Kyoto is 100 feet high almost its entire length.  This characteristic can be problematic at low speeds with the wind on the beam.

It was already snowing when we departed at 1600.  The wind was blowing SE at 20, and snow increasing in volume as forecast.  About four hours into the transit the blizzard of 2010 arrived with a fury.  Sixty five miles south of Baltimore with temperatures rising above freezing, the driving snow turned into horizontal sheets of rain.  The wind was now blowing steadily from the east at 40 kts.  We were making turns on the engine for 17.5 knots, but our actual speed was 15.2.

At midnight, we met one of MSC’s large containerships in the Rappahanock Channel.  These ships are 1000 feet in length, 141 feet wide, with a draft of 43 feet.  They can carry more than 7000 containers. The other pilot and I arranged to meet on 1 whistle, port to port.  I could see the MSC ship’s lights at a quarter mile distance.  The wind and current were on the port side of my ship and pushed us to the right.  In order to remain in the channel I had to steer a course to the left.  The result is the slightly uncomfortable feeling of steering right at the oncoming ship. We passed each other 200 feet apart at a relative speed of 32 knots. 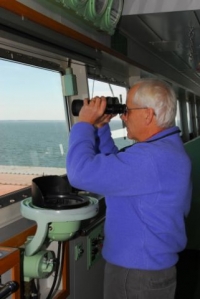 At 0150, we were approaching the Chesapeake Bay Bridge tunnel.  We were 8 miles distant from where the Chesapeake Bay meets the Atlantic Ocean, and my job as pilot would be finished.  There was a 2 knot current on the Hoegh Kyoto’s nose and 60 knots of wind out of the NE.

Suddenly, I felt a difference in the vibration in the deck under my feet.  The vibration is caused by the huge main engine down in the bowels of the ship.  The more the engine is working the greater the vibration.  In this particular case the vibration all but disappeared.  A quick glance at the engine rpm indicator confirmed that we were losing power.  At almost the same time the bridge telephone rang, and the Captain spoke to the engineers down below.

A small problem was somewhat of an understatement.  We carried controllable speed over the Bridge Tunnel, but the the ship’s speed was bleeding off quickly. We were steering roughly SE, with the wind now on our port side blowing steadily at 60 with peak gusts in the low 70’s.  The ship began to drift rapidly to the right, out of the channel.  I brought the ship to a course 50 degrees to the left, and still we were drifting right, our forward speed was 6.5 knots.  Anchoring a car carrier in these conditons was really not an option.  Car carriers are notorious for dragging anchor in high winds.  Now east of the Bay Bridge Tunnel our ship was also beginning to feel the force of the Atlantic Ocean.  I could feel the Hoegh Kyoto’s bow begin to rise…significantly.

Four miles ahead of our ship is a deepwater channel that we must enter and exit.  There is a shoal area just to the north of it.  In Northeaster conditons big seas break over the shoal and roll into the deepwater channel making control of a ship difficult.  I like to carry some speed through the channel in conditions like this.

I firmly explained to the Captain that we needed at least 10 knots of speed for the next 40 minutes, and requested that he explain to the engineers that the margin for errror was not in a place where the pilot was comfortable with the outcome.  A quick conversation ensued between Captain and Engineer.  We got the extra speed. 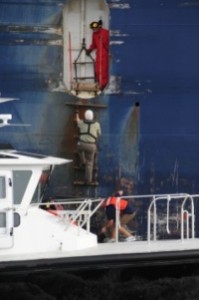 For a period of time, I had been aware that my pilot boat was working its way out to retrieve me.  The Pilot Boat Patapsco is 56 feet long, and in the competent hands of her crew, made for heavy weather.  She can do 26 knots in calm weather, but not tonight.  It’s far too rough.  As the Patapsco approaches I can see almost all of her disappear between the wave heights.

After exiting the deepwater channel, I turned the ship to the south putting wind and sea on the port side creating a lee on the starboard side where the pilot ladder was hanging.  The launch operator called me on my vhf radio and told me he thought he could get me off in the ship’s current configuration.   The ship was rolling heavily, and  because of the wind and current, moving sideways at 3 knots.  By heading south, we were steering right for the beach at Cape Henry 2 miles away.  This is common for the pilots, but not comfortable for departing ship masters.

Satisfied that the Captain understood the environment and traffic situation.  I moved with alacrity to the pilot ladder decks below.  Several crewman met the mate and me at the top of the ladder. “Farewells and goodlucks” were exchanged, and I stepped to the top of the jacobs ladder.
“Pilot on the ladder” the mate informed the bridge.

Getting on and off a ship in heavy weather is an exercise that requires focus and timing.  The ship rolls and the pilot launch moves in its own erratic way.  I hang from the ladder getting a sense of the timing…make a quick move, and I am aboard Patapsco.  Because of the ship’s sideways movement, we are glued to its side.  However, the launch operator’s skill, and two 600 horsepower engines take us neatly away… 0252…”Pilot away!”

The three of us, launch operator, deck hand and pilot head back to the pilot station with big following seas obliterating our view of the horizon as they pass beneath the the boat.  It’s a little scary, and thrilling.  The crazy thing is that none of us would rather be anywhere else.