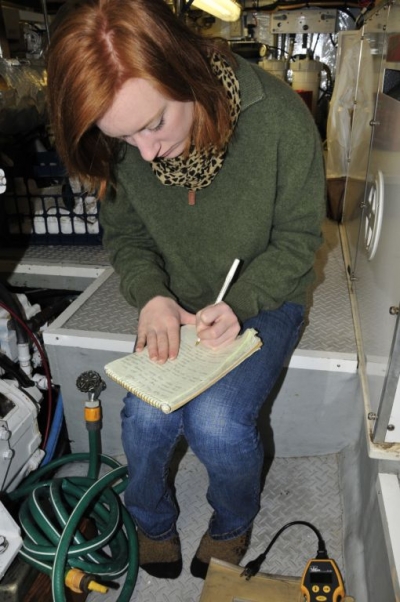 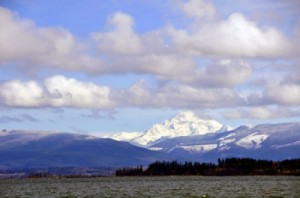 The seatrial afforded those aboard a reoccurring set of spectacular vistas.

As we left Port Townsend and headed for Anacortes, my nerves began to stir.  I felt the excitement of a new project but the nervousness of the unknown.  Vessel inspections were something I had never thought I would be partaking in, even though my father made it his life’s work, and I had been around boats all my life (it is hard not to be while growing up near the Chesapeake Bay, where boating is a way of life).  I had done a short stint in sailing lessons, gone out on the water with many friends, toured many marina docks (which I seemed to have a personal affinity for falling off), and I had attended a high school that had an entire curriculum based on the thesis statement, “great journeys begin at the river.”  While these attributes made a good foundation to being a boat enthusiast, I had never really entered the world of boating, until now. 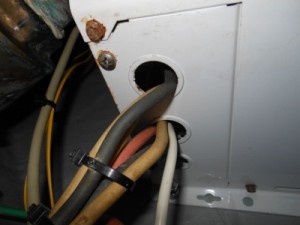 In many cases, finding the “bad” stuff required hanging upside down with a mirror and a flashlight.

Up until my new job at my father’s company, I had been absent-minded toward boating; I never thought to pay attention to the details or the small things.  The closest I had come to these small details, let alone an actual inspection, was watching countless slide shows of technical photos, calling out “bad” to the photos that seemed to be wrong, or saying “good” to the ones that looked right (even back then my father said I had a natural ability to identify technical right from technical wrong).  With a range of thoughts and memories swirling around, punctuated by the beauty of the sights passing by during the drive to Anacortes, including and especially Deception Pass, with its rocky waters surrounded by verdant evergreens and thick foliage set against a backdrop of snow-covered mountain tops shooting up through the puffy white clouds, we finally arrived at the marina to get a quick look at the subject boat. I could not help but think, “She looks both ominous and beautiful.” 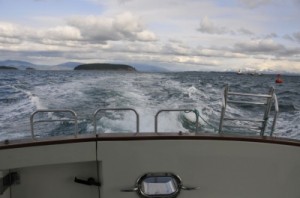 Conditions during the sea trial were just right: blustery and choppy.

Waking up the next morning, much earlier than I’m accustomed, I was still hesitant toward the idea of the boat inspection, though my nerves had been slightly appeased from dinner with the client the night before. His jolly attitude was a little contagious and as we climbed aboard, this helped me keep an open mind for the task ahead.  My job was to follow closely behind my dad and pay attention to what he was inspecting and photographing, while taking detailed notes on what seemed to need attention or repair (my good-or-bad slide show practice came in handy). After settling in, we started; I played with my note-taking skills, trying out different abbreviations or spellings for words I did not quite understand. 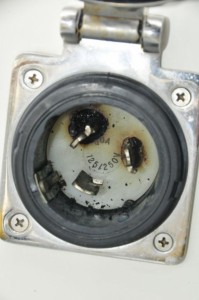 A scorched shore power inlet; this will require replacement.

As we began working our way through the boat taking notes and pictures (lots of pictures), more and more people began to show up.  We met the captain, ran into the surveyor, came across the boat-keeper, introduced ourselves to the engine technician, and exchanged hellos with the buyer again.  Including my dad and me, there was a total of seven people on this boat… it was an inspection party!  The whole experience started to become, dare I say – fun.  I became increasingly comfortable around the boat, and as I did, I began to pick up terms and see what my father was seeing as we crawled into every nook and cranny aboard.  When I realized my knowledge of what was happening around me was expanding, it became more and more exhilarating. 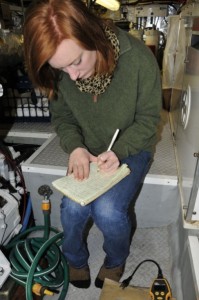 We cast off our lines and moved away from the dock and as we rocked back and forth from the slight waves that we plowed through, my dad and I kept working our way through the inspection.  I began to get lost in the work, so much so I didn’t realize we were nearing our destination, a boatyard with which we had an appointment to haul out. 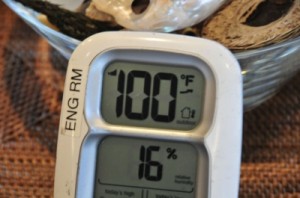 We went ashore after silently wolfing down the hearty lunch the client had graciously provided and entered the damp cold for which the region is so well known.  I couldn’t feel the wind whipping at my face at first because I was too enamored with the sight and sensation of the boat as she was slowly emerging out of the water; she looked so much bigger.  As the astonishment wore off, and the cold and wind began to sink in, we finished our inspection of the bottom.  Everyone was eager to get back to the warmth of the boat’s cabin which included a wonderful diesel fire place. 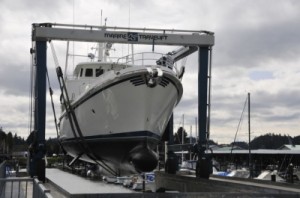 Size matters, especially when it comes to haul outs.

As we made our passage back to the marina (with two new members added to the inspection party, having a total of nine people aboard now), I had time to contemplate my job and what it entailed. From one perspective, you could see what we were doing during our inspection as nit-picking: fussing over every little detail imaginable. But that was not our job at all. In fact, by looking at every little detail, inserting ourselves into every last space on the boat, we were reading the boat’s story.  We now knew how the boat was previously treated, how it had been built, and what it had gone through.  When I first stepped aboard, I was apprehensive when it came to touching anything. After completing a day of inspecting, or “reading the boat” as I like to think of it now, that whole notion seemed superfluous to me, because now we knew exactly what condition the boat was in and what it needed to be made ready for the new owner. 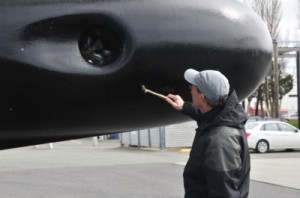 The surveyor sounds the hull for signs of trouble.

When we arose the next day to complete our work, I could not wait to do some more “reading” and note-taking.  Arriving at the boat, I looked at what I had previously described as ominous in a new light; it now seemed welcoming and familiar and I knew how important our role was.  As the day came to an end, even though exhausted, I was sad to say goodbye, but happy to know that the boat’s story was not over, and that it was now headed to a happy ending, with a little help from my dad and me. 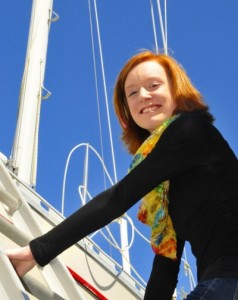 Katie D’Antonio is a full time employee of Steve D’Antonio Marine Consulting.  Thanks to her slender proportions, she’s been designated as the firm’s primary inspector of skinny spaces.

Katie can be reached at katie@stevedmarineconsulting.com

Dear Steve,
I wanted you to know what I see happening in the field as it pertains to the recent blog by Ralph Naranjo (March 15, 2012 SDMC Blog) on anchors. I respect his writing over the years a great deal.
I see his comments as not reflecting (last 5-10 years) my experience in terms of anchor choices. The CQR and its ilk do not work well in the Med and in hard-to-penetrate bottoms elsewhere and almost all full time anchor-a-lot cruisers, especially those in marginal areas I know, have moved away from using them, especially in the medium size boats, 35-45 feet. The heavier anchors in bigger boats seem to work better, probably as more weight means better penetration, but the newer style anchors are reported as much better across the board and regardless of boat size.

On Alchemy, our overweight CQR (60 pounds), which we had used for decades on various boats, had a difficult time occasionally in the Caribbean and was really challenged regularly in the Med. After struggling for 2 years in the Med with our CQR, we bought a 66-pound Spade (a Rocna was also a choice, but would not fit on our bow with its roll bar). It has proved to be far superior in the 3 years (anchoring 200-400 times) we have used it. I believe, by anecdote and word of mouth, but not actual experience, that the Rocna and the Manson (Supreme?) would also have performed the same as the Spade. All those I know who have switched have had a similar experience and wish they had done so earlier.
The photo caption saying that a CQR and a Bruce on the bow is a good combination is also a notion to which I would suggest an alternative (this caption was the editor’s). We carried that exact combo for a number of years. Our experience is that where the CQR did not work and you went to a second anchor, that the Bruce also would not work as they work in similar ways and bottoms. Further, you are carrying a lot of weight in the worst possible location that you rarely use (for us it was a 60-pound CQR and a 45-pound Bruce). I would suggest a more versatile and efficient solution would be to have a heavier primary and a lightweight secondary, like a Fortress.
This is based on my belief that anchor weight is of primary importance in anchoring security and that most of us rarely use 2 anchors. If you can get one down and set, you are happy. Two is sometimes necessary, but geometrically jacks up the work and complications potential. And when a second anchor is used, it is often: 1) Used where the pull is from one direction, 2) Used when you want an anchor that holds in a wide variety of bottoms and not a clone of your primary to hedge your bets, and 3) Light enough to put into a dinghy and row/motor out in marginal conditions. The Fortress (ours is an FX 37, 19#) meets the above criteria and works well with a short amount chain connected to line rode, which again keeps weight down in the bow and allows for easier deployment from a dinghy.
I hope this is helpful in your consults with clients.
Dick

It’s always interesting to hear feedback from others. We may agree to disagree on some aspects, but your basic opinions are sound. An anchor that’s easy to row out is great, but I prefer doing so with a 35 H series Danforth rather than a Fortress. It’s a matter of finding a rock, coral or a hulk on the bottom and tearing a fluke off the anchor– less likely with the Danforth.