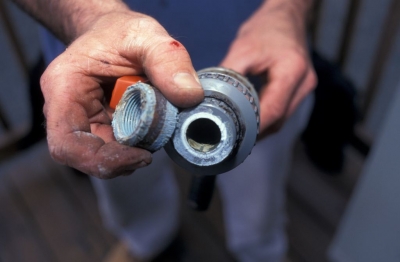 Photos by Steve D’Antonio and except where noted 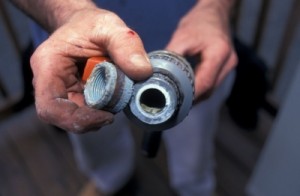 This PVC “pool” valve used as a seacock snapped off in the mechanic’s hand as he closed it. Luckily, the boat was on land at the time. PVC has limited use as plumbing aboard boats for carrying raw water.

Thanks for the informative article on Seacock Plumbing. I’m wondering why PVC pipe is not allowed as part of a system. I have used several short lengths of 1 1/2″ PVC for the head discharge plumbing with isolated short lengths of standard sanitation hose at both ends. In other words, my PVC lengths float between (relatively) flexible lengths of the thick black, wire-reinforced, sanitation hose. Since the PVC does not permeate like sanitation hose does, it is somewhat permanent and desirable. I’m about to replace one long length – about 2′ long in an isolated location – of very smelly sanitation hose with 1 1/2″ PVC.

Is this PVC pipe application using flexible hose at each end acceptable? I understand and agree that a rigid PVC connection is dangerous and unacceptable.

Sealand used to make a very robust barbed PVC fitting that glues into 1 1/2″ PVC pipe and has a very long barbed end for connecting to hose. I have a few of these, but don’t know if they are still available.

Thank you for the note and query.  The question you’ve posed is not only a very good one, it’s also one that’s commonly asked.  The “rule” regarding the use of PVC is strictly my own, however, it’s based on firsthand experience of failures where this material is concerned.  I’ve seen dozens of PVC plumbing components fail in marine applications (see attached example photos.)  I suspect failures are exacerbated by vibration, extreme temperature cycling and excessive leverage that is often imparted on these installations. 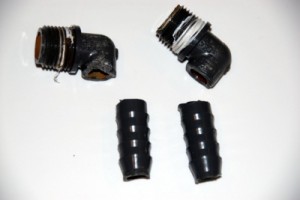 It is not uncommon to break off the end of PVC barbs when removing the hose, as happened to these two water maker fittings; they were just two years old. In most cases, PVC simply doesn’t have the strength for raw water plumbing.

There was a time when ABYC seacock standards cited PVC’s inadequate modulus of elasticity and tensile strength, however, that wording is now no longer used and PVC isn’t referenced specifically.  The guidelines do specify that any seacocks installation must be able to withstand the application of 500 pounds of static force for a duration of 30 seconds without failing to perform as intended (I read that to mean it doesn’t break, leak or seize.)  I’m fairly sure few PVC valves could withstand such a test.  It’s important to point out as well that ABYC guidelines have no bearing on raw water plumbing other than the actual seacock, while my “standards” do cover all raw water plumbing.  A failure of a seacock is only marginally more serious than a failure of a large raw water plumbing fitting, especially if the vessel is unattended.

My personal durability test calls for any components that could lead to flooding in the event of a failure, to be able to withstand being stood upon.   If I can’t stand on it without worrying about causing a failure and flooding, it’s simply not rugged enough.  Many PVC components and some metallic ones won’t pass this test. 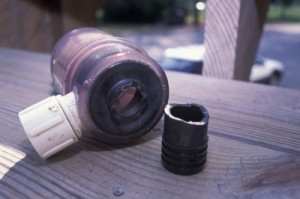 Sea water strainers should also be strong enough to pass the “stand on it” test. This PVC flush fitting failed and could easily have flooded the vessel.

For all of those reasons, I’m no fan of PVC raw water plumbing.   Having said that, for use in sanitation systems, where a failure won’t lead to flooding, they are well suited, particularly when they are isolated at either end by flexible hose, as yours are. 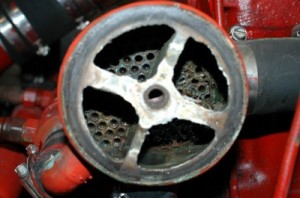 Engine and transmission heat exchangers should be periodically checked to ensure their cleanliness, every other year or every 500-750 hours, which ever comes first. Debris and scale can clog both the sea water as well as the coolant sides, dramatically inhibiting the transfer of heat necessary for a cool running engine.

Hello Steve,
I have a question, perhaps for your blog.
I have twin Yanmar 6LYA-STP engines (370 hp) that I have maintained
since new in 2004. Although I have only 500 hours on the engines, I
have been told that I need to pull apart my complete raw water circuit
and look for salt/crud buildup and corrosion. This includes the engine
coolant heat exchanger and oil cooler, the turbo intercooler, the
transmission oil cooler and the exhaust elbow. The engines run smooth
and cool and there is no sign of water, coolant or oil leaks. All
routine seasonal maintenance has been done by the book. I have been
told to do this because the “marine age” is high (9  years) with the
boat in salt water even though the hours are low.

What do you think? I am concerned that the so called “preventive
maintenance” may cause more trouble than it is worth as well as being
very expensive. Can you put a ballpark number on the cost of an
inspection, disassembly, cleaning and reassembly assuming no major issues
are found?

Are there any other engine issues that might occur with low hours,
infrequent use and marine age?

This is an excellent question. Indeed, based on the passage of time,
your mechanic isn’t incorrect, most engine manufacturers and
maintenance programs recommend disassembly, inspection and cleaning
before this stage in an engine’s life, regardless of hours. 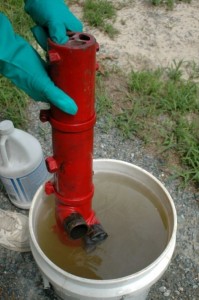 The traditional cleaning method: this heat exchanger has been removed for immersion in a cleaning solution. This is sometimes necessary, but not always.  Now, cleaning can be carried out without removal or major disassembly.

My own recommendation calls for inspection and cleaning, but not
necessarily disassembly, of the engine’s main heat exchanger every two
years. However, you do have an alternative, at least for part of this process. 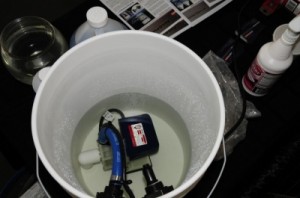 A proprietary “run bucket” like this includes a pump immersed in cleaning solution and hosing to connect it to the raw or coolant sides of an engine, generator or air conditioning system.

You could clean all of these components, except the exhaust elbow, using a
proprietary cleaning agent and pump system available from Trac
Ecological. The cleaning solution
http://trac-online.com/index.php?option=com_virtuemart&Itemid=62
and http://trac-online.com/index.php?option=com_virtuemart&Itemid=73 are used together to clean raw water cooled components. I’ve used or supervised the use of this system many times and can attest to its effectiveness. 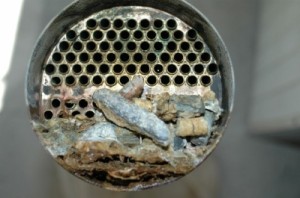 This heat exchanger obviously had not been checked for some time. Nearly half of the surface area of the tubes were blocked by old pencil zincs and scale. And yes, the engine was chronically overheating.

The cleaning protocol will remove lime scale, barnacle and other shell
material as well as zinc anode “debris”, however, it will have no
effect on rubber such as impeller parts, pine straw (I’ve seen this
clog heat exchangers) or sea grass. For this reason, I still recommend the main heat exchanger end caps be removed for inspection purposes, and if
there are any heat exchangers in line before the raw water pump, for
hydraulic or fuel cooling for instance, these too should be inspected.
In the latter cases these heat exchangers typically cannot be
disassembled, which simply means removal of the inlet hose and a look
inside with a flashlight. 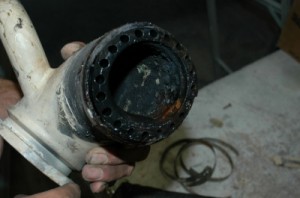 Blockages in the injected water discharge holes can cause hot spots in the exhaust hose, which can in turn fail as a result.  Such a failure can be devastating as no overheat or other warning will be given to the operator and the engine room/compartment will be filled with hot, atomized seawater and soot.

Because cleaning solution can’t be easily circulated through it using
the above-mentioned pump system, the exhaust elbow would still have to
be inspected visually, which would require removal of the hose.
Exhaust elbow spray rings do suffer from blockages and corrosion, so a
thorough visual inspection every three or four years is a good idea.
Sincerely, 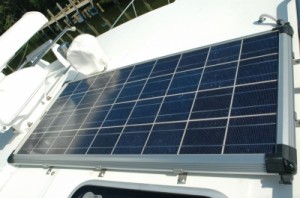 Solar panels must be mounted in locations that afford them the best view of the sun, but must be wired correctly to prevent fires.

On a recent trip north to Maine (via auto), I stopped to help put out a fire on the roof of a camper. It appeared that the camper owner used a non-waterproof junction box to house a direct connection between his roof-mounted solar panels and a wire leading to his house battery.
As I disconnected the wire to his battery, I was amazed to see that there was no fuse on the positive lead. It had been raining in the hours preceding the event and I suspect water egress into the junction box which housed both positive and negative leads caused the shorting, the cause of the fire, which was concentrated in this area. As such, I am uncertain that a fuse would have prevented the fire. The wire leading to the battery was not hot, nor was the insulation burned except in the junction box area.
Unfortunately/fortunately the fire department arrived as well as the vehicle owner after we had extinguished the blaze and they ripped out the junction box so I have no photos to show you.
The marine implications are obvious, hence the reason for my Email.

This is an interesting if not near tragic story.  It’s also one that also has exceptionally high relevance to marine applications.

When it comes to over-current protection (OCP), fuses, and circuit breakers, solar panels are no different than any other appliance, regardless of whether they consume or produce electricity.  Ashore or afloat, all wires connected to a battery’s positive post, or the vehicle’s/vessel’s positive distribution, either directly or indirectly, must be equipped with a fuse or circuit breaker as close as reasonably possible to the battery or positive distribution bus.  I’ve probably uttered this phrase hundreds of times in my career: every inch of wire between the battery and the fuse/CB, if there is one, is unprotected and will overheat and possibly cause a fire in the event of a short circuit.  With some caveats, the marine standard allows for up to 72 inches of unprotected wire, i.e. before the fuse/CB is installed, however, the closer the better.  For all but the smallest solar panels, and certainly for arrays, installing OCP at the panel also makes good sense (some come equipped with a fuse) as their output could create enough heat in the event of a short, even if the OCP at the battery does blow. 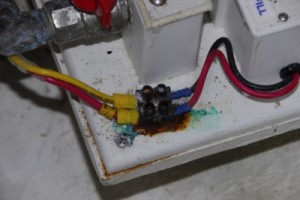 Water dripping on an electrical connection can cause corrosion which can lead to a high resisitance, high heat problem, but not necessarily a dead short. Any junction as poor as this should be replaced immediately.

In this case, whether  OCP would have saved the day is open to debate. (It’s similar to another letter I answered several months ago regarding shore power cord ends that get wet. They have been known to overheat and cause a fire without tripping a circuit breaker. High resistance does not necessarily create high current draw.)  The fire in the junction box likely represented a high resistance short.  High resistance shorts behave more like a load, generating heat in this case, but potentially not drawing enough power to blow a fuse. Rather than a conventional low resistance short, the latter trip breakers and blow fuses readily.
Regardless, as previously-mentioned, every wire connected to the battery or the positive distribution bus, save one, must be equipped with OCP, and OCP at the solar panel makes good sense too.  The one exception is the vessel’s starter, it’s exempt from this guideline, which for diesel-powered boats is established by the American Boat and Yacht Council’s chapter E-11, and by the USCG for gasoline powered vessels (in the latter case it is, as part of the Code of Federal Regulations, the law). 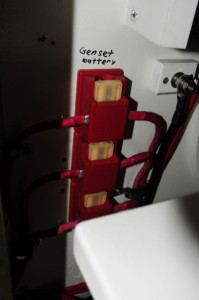 Fuses are not necessarily a deterrent to fires, particualrly where high resistance shorts are concerend.

A water proof junction box certainly would make sense in an installation of this sort, again, ashore or afloat, and a fuse or circuit breaker is simply a prerequisite.