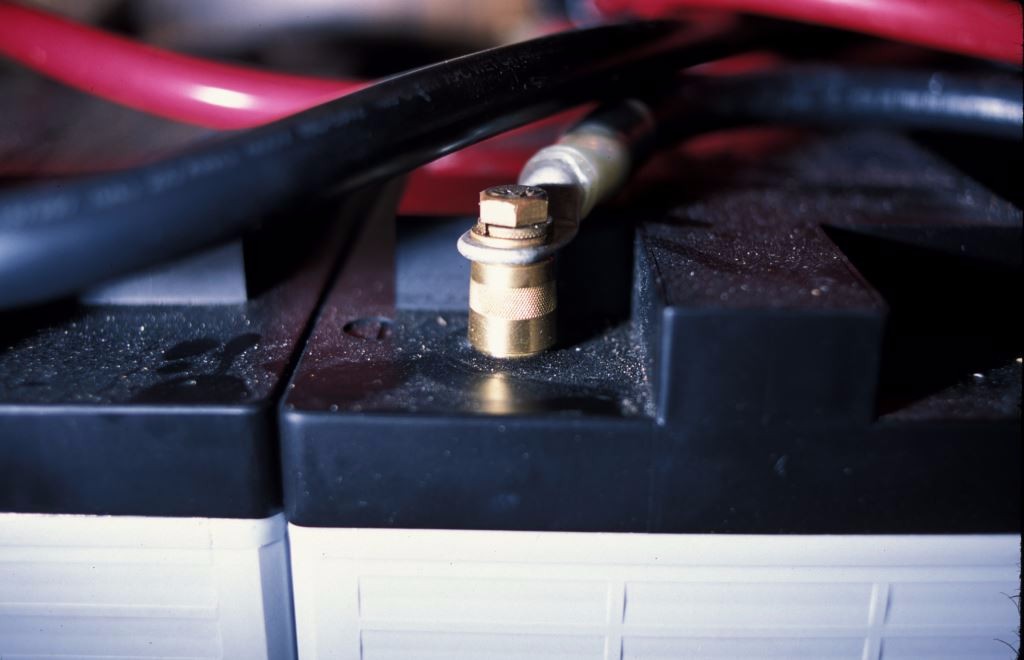 Last month I mentioned the disquieting marine industry trends of acquisition and consolidation and the net result of diminished support and customer service.  Sadly I just encountered yet another example, one of the premier manufacturers of some of the marine industry’s finest motor mounts, ones I recommend routinely.  They’ve been acquired by a defense contractor and the recreational boat page on their site is virtually blank, it includes a short list of products, with no details what so ever.  There is, however, a slew of information about military products.  Unsurprisingly the “contact us” link is gone.  I can only hope they continue to offer this very high quality product for what is now no doubt a small market for them.  I’ll continue to report on these cases, both good and bad, as I encounter them.

I also noted last month that there were ways for product manufacturers, both independents and those who have been merged, to retain and even grow their customer base by providing premier support and service.  I’ve studied, written about and lectured on this subject extensively, and have come up with a series of guidelines for delivering premier customer care,.  These are derived from a lecture I deliver to those in the marine industry on this subject, a sampling of which follows.  They are in no particular order, however, I’d be curious to know how readers rate them, and which of their own they may wish to share.

*For more on the art of the apology visit https://stevedmarineconsulting.com/wp-content/uploads/2014/03/parting_shot_im_sorry.pdf

This month’s Marine Systems Excellence eMagazine feature addresses the subject of battery terminals.  I hope you find it both interesting and useful.

Happy holidays, and all the very best for the New Year, from the staff at SDMC Inc. 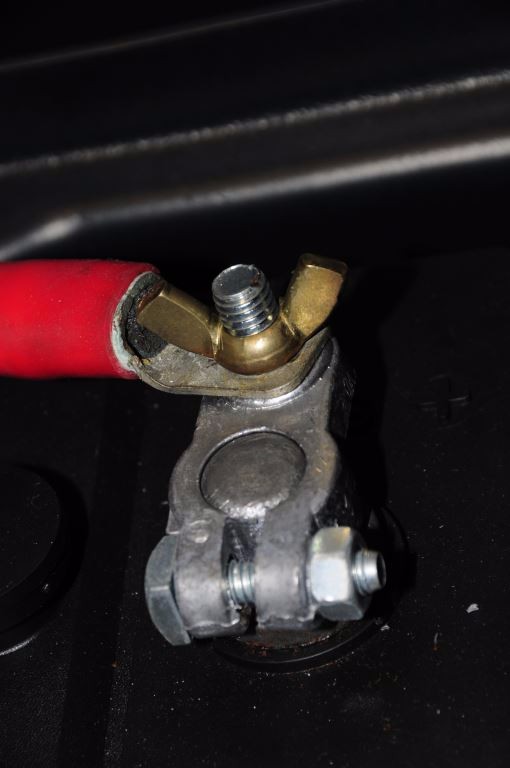 A failure prone combination, a cast in place stud and a wing nut.  Both should be avoided, particularly where heavy cables are used.

There are myriad ways of connecting battery cables to battery banks.  Some are rugged and long lived, others are not.  Regardless of how well-designed and robust a vessel’s battery banks and DC electrical system may be; if the interface between the two is tenuous, then reliability will suffer.

Battery post (the metal portion that’s an integral part of the battery) types often dictate the connection method.  Cylindrical, lead, automotive-style posts are especially common.  While there’s nothing wrong with them per se, their use does require an adapter that enables the attachment of a cable’s ring terminal, which is to an extent a necessary evil.  Interspersing anything between the cable and the battery introduces the potential for increased resistance, arcing, heat generation and failure.  It’s worth pointing out that ignition sources such as sparks, adjacent to batteries, especially flooded batteries, can lead to hydrogen explosions.  It is, therefore, imperative that battery connections are secure, arc-free and provide a low resistance path for current flow at all times. 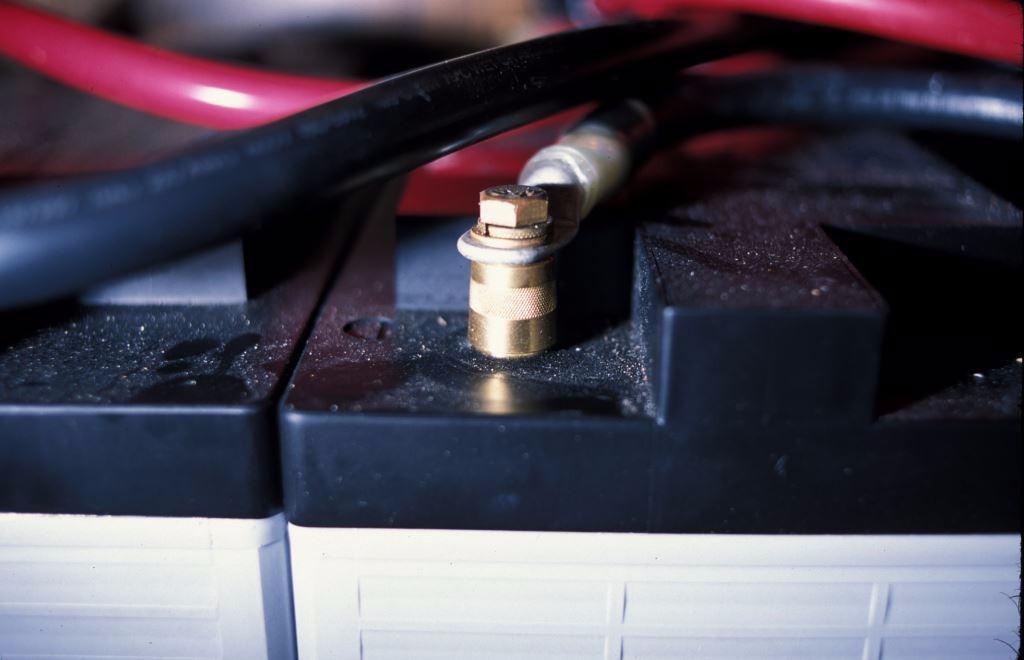 Terminals of this sort are advantageous in that they eliminate the need for an adapter, or separately supplied fastener.

There are several types of automotive post-style adapters, and they run the quality gamut.  Adapters should rely on fastener compression to maintain electrical and physical integrity.  One style that does just that is often referred to as a ‘military battery terminal’.  Tightening the clamping and electrical connection fasteners compresses the assembly, enhancing its security.  A more common, and far less reliable, arrangement relies on a stud that is cast into the terminal’s comparatively soft lead structure.  This design is prone to failure when stressed by stiff, heavy or multiple battery cables or in the event the terminal overheats. 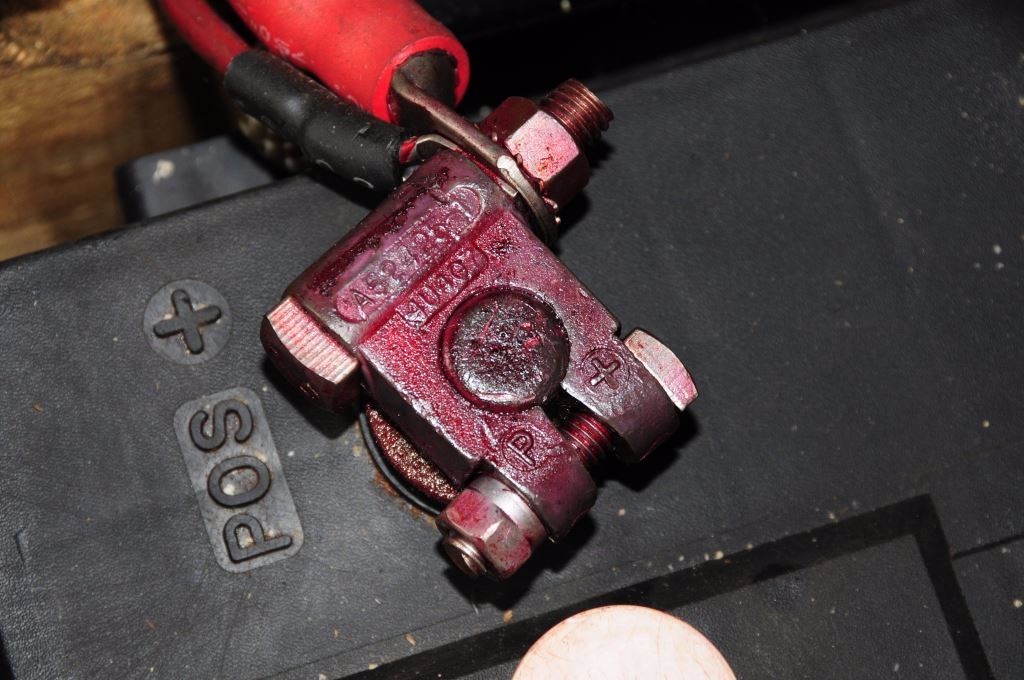 Compression style battery lug adapters, often referred to as “military terminals”, are robust and virtually failure-proof.  While this terminal is exemplary, the order in which its ring terminals are installed is incorrect, the largest ring terminal should always be installed first.

Batteries that are designed for marine and industrial applications are often equipped with what’s known as a flag terminal.  Flag terminals are blade-like protrusions that take the place of an automotive post.  These may be copper, and usually are on AGM batteries, or lead. Advantageously, a hole in the flag enables a ring terminal to be through bolted directly, without the need for an adapter. 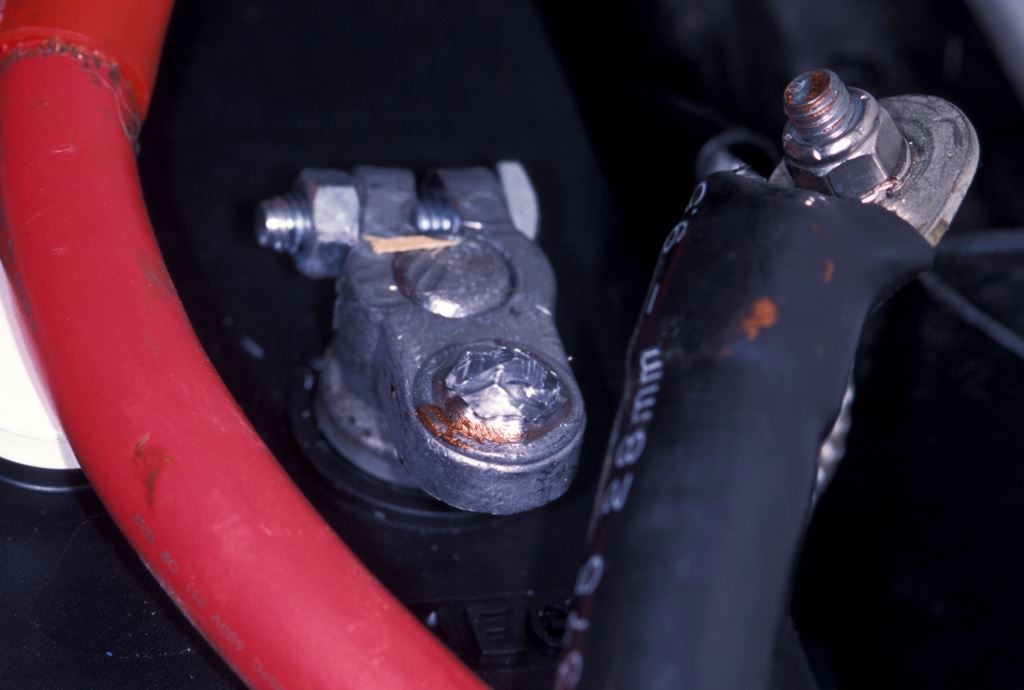 If the battery is of the AGM or gel variety, over-stressing the flag with stiff or poorly supported cables can lead to case leakage which will, in this type of battery, dramatically shorten its life.  This battery type is sometimes referred to as ‘sealed valve-regulated lead acid’ or SVRLA.  The case is manufactured with an internal pressure of about 1.5 psi, which improves the charging process, however, it also means any breach essentially releases both the pressure and water vapor, neither of which can be restored once this occurs. 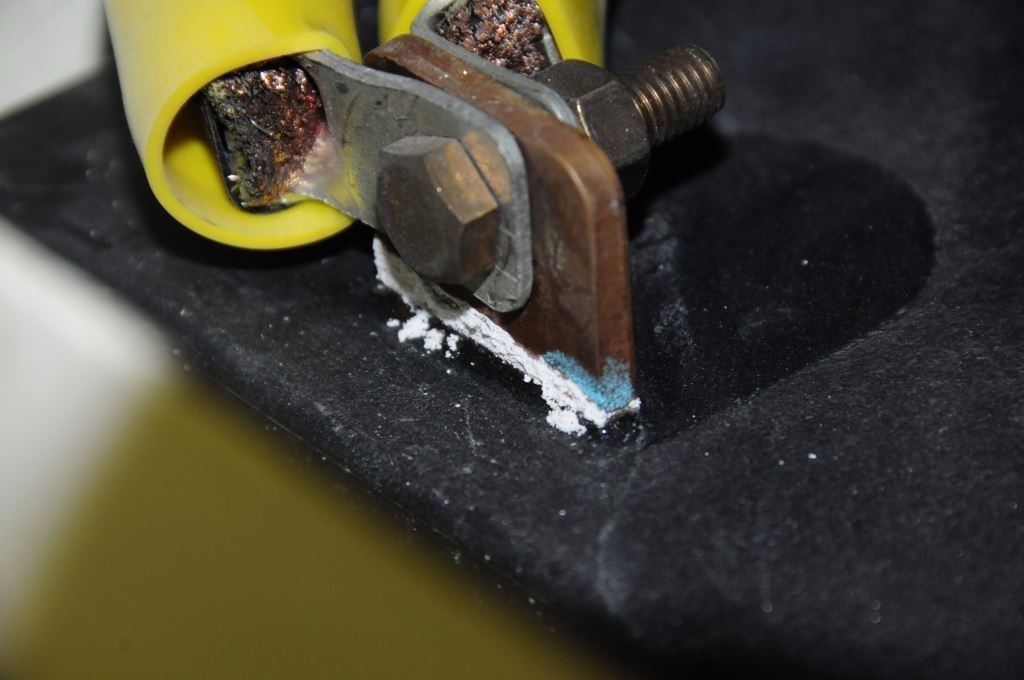 While it’s often dismissed as common battery terminal corrosion, when SVRLA batteries exhibit this type of white, powdery accumulation adjacent to terminals it’s nearly always an indication of a breach of the case’s pressure seal.  When that occurs, the battery’s days are numbered.  Excessive side loading and stress on battery terminals can exacerbate this problem.

A variation in the flag post theme is the threaded post.  It vaguely resembles the automotive post; however, it’s often made of copper alloy rather than lead, and it includes a vertical thread and fastener, which allows direct ring terminal attachment. 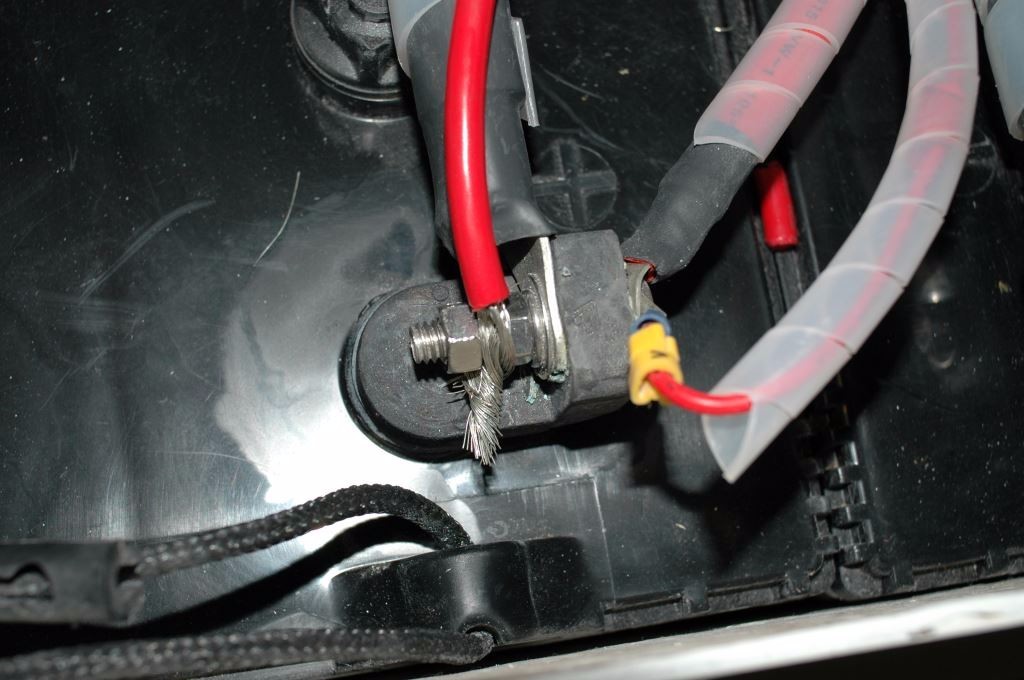 Flag post battery terminals eliminate the need for adapters.  In this case, however, the installation has some shortcomings, the most important of which is the ring terminal-less wire.  Beyond that the stainless steel fastener is being used as part of the current path, a practice that should be assiduously avoided. 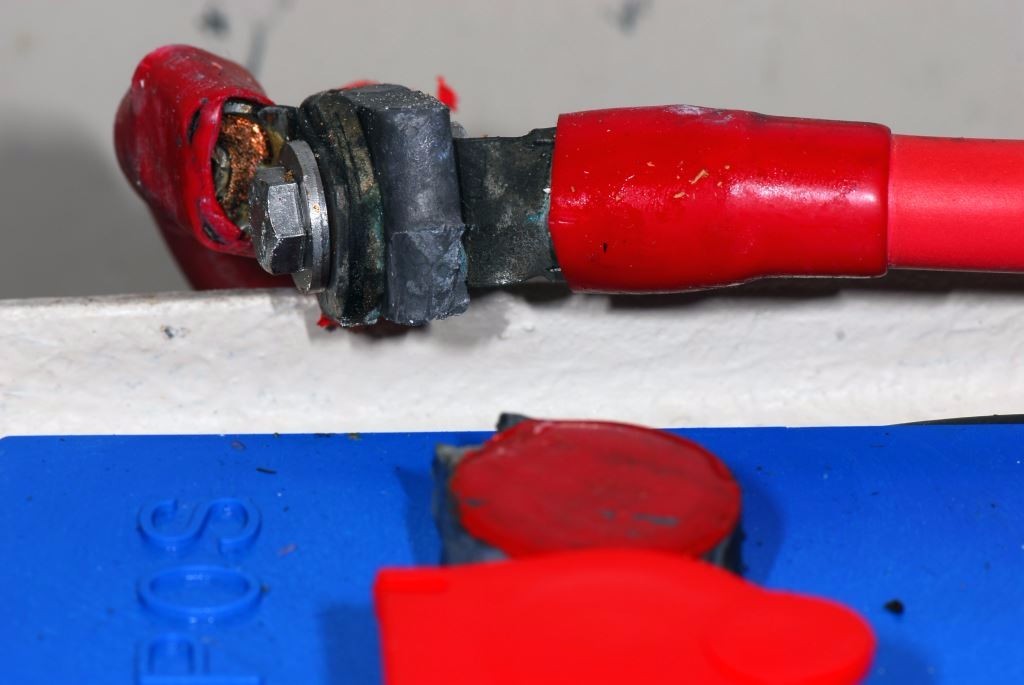 This variation on the flag post terminal clearly wasn’t up to the task; the gossamer interface between the vertical flag and the battery post is simply inadequate.

Whichever style terminal is employed, following a few guidelines will increase reliability and reduce the likelihood of the aforementioned arcing and fire/explosion issues.  The hole in the ring terminal must match the size of the fastener to which it’s secured, without the need for washers, and washers must never be placed in the current path, i.e. between a cable’s ring terminal and the battery terminal.  Additionally, under no circumstances should wing nuts be used to secure battery terminals, regardless of whether or not the adapter lugs or batteries themselves come equipped with them, if they do they should be discarded  and replaced with hex nuts. 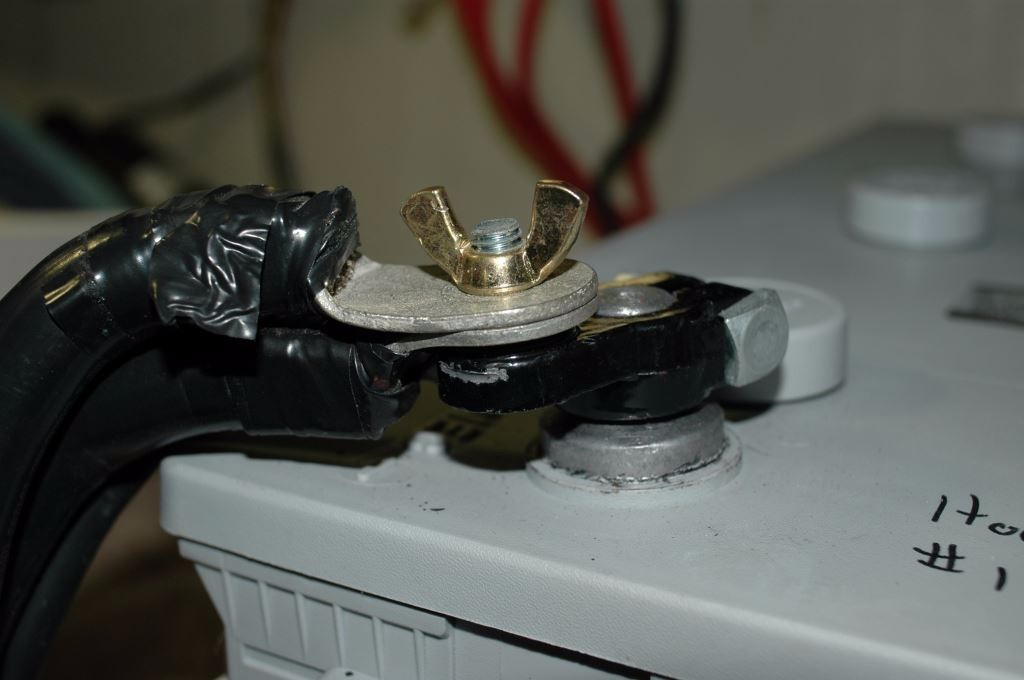 The leverage placed on this style of battery terminal adapter lug, as well as the battery post, can clearly be seen in this image. 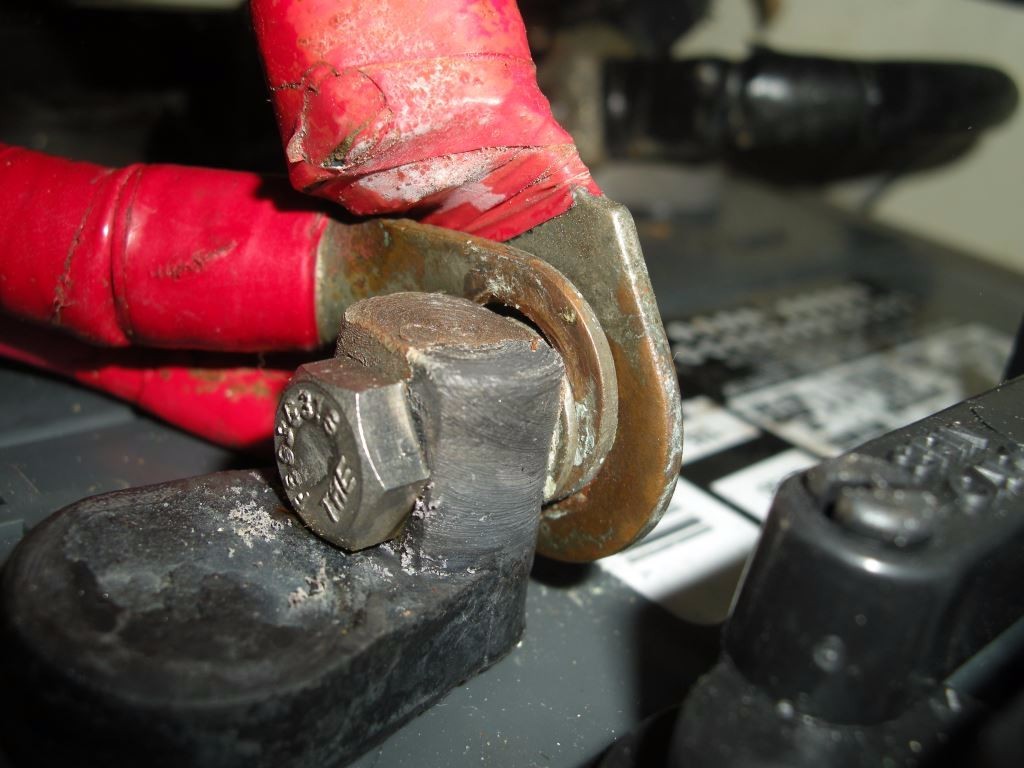 The holes in ring terminals must match the fastener used to secure them; doing so is required for ABYC compliance.  Not only is the ring terminal shown here improperly sized, a stainless steel washer has been inserted in the current path between it and the battery post.

While ABYC guidelines limit to four the number of ring terminals that may be placed on a single stud, where batteries are concerned I’m more conservative, I’d prefer to see no more than two.  The more connections at a single post the more potential there is for poor connections, and increased resistance, particularly in this corrosion-prone environment, and the more stress that’s placed on the post.  Installing a bus bar adjacent to the battery is one means of reducing the number of connections at a given post or terminal.  Make certain all positive terminals and bus bars are fully insulated to prevent short circuits. 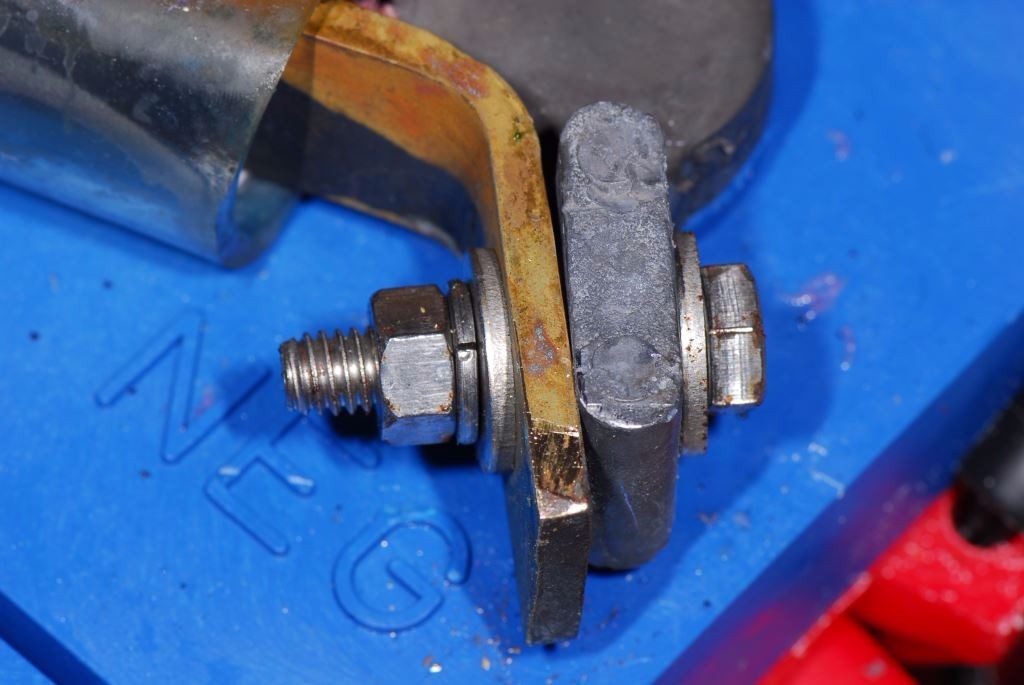 The contact area of this brass bus bar, which is being used to connect this post with that of another battery, is far too small.  While tempting, because of their inflexibility, use of generic bus bars to interconnect batteries is often less than ideal.  If bus bars are used, they should only be made from copper.

Finally, using a conductive paste such as Thomas and Betts Kopr-Shield at the interface between the various connections makes excellent sense, as it excludes air and moisture, reducing the likelihood of corrosion.  Once connections are complete, spraying them with a protective coating, such as CRC Battery Terminal Protector, will further enhance reliability and safety.