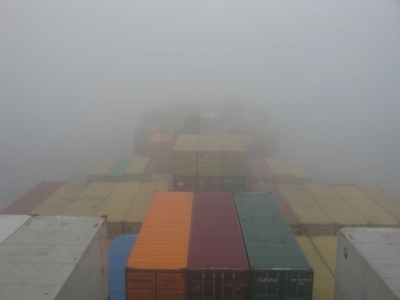 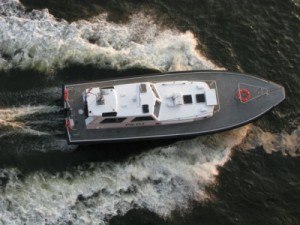 A pilot boat carries its all too important cargo,a skilled pilot, to a waiting ship. Although few show it, pilots carry the weight of the world, ensuring safe passage of large ships, their cargoes and crews.

It was mid afternoon early spring, and a blanket of thick fog had settled over the entrance to Chesapeake Bay.  I had been appointed (as pilot) to an inbound ship headed for Baltimore.  As I stepped aboard the Baltimore, our 44’ pilot boat, the Cape Henry pilot tower called and informed both the boat crew and me that there was nothing else moving at the Capes. 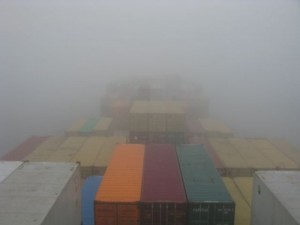 This view from the bridge of a containership, it’s less than comforting and not very useful in piloting the vessel. The only way a smaller vessel in its path would be recognized on the bridge would be from their radar signature, and even that’s not guaranteed.

This communication implied that the VHF traffic and tower’s radar indicated that we would have a clean run out to my ship. Taking advantage of the opportunity, the boat captain asked me if his less experienced associate could run the boat.  We both agreed that these would be good conditions for training.  As we passed under the Lesner Bridge exiting Lynnhaven Inlet, the fog was indeed thick.  However, there was no wind and the navigational aids gave a good return on the radar.  I was seated immediately behind the boat operator and had a good view of the radar screen, as did the boat captain standing at his side.  The operator did a very nice job in the channel, and as we rounded the last marker he increased our speed to 18 knots, setting the scale on the radar to 3 miles.  There was nothing around us out of the ordinary. 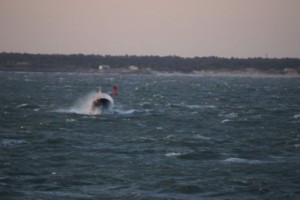 A pilot boat makes its way to a a ship to retreive a pilot.  Pilots must be ready and willing to head out in weather that often sends other mariners for safe harbor.  If they and the pilot boat’s coxswain believe they can be put aboard the ship, then they go.

At some point in the 20 minute ride out to my ship the boat captain and I began to talk. I don’t recall the topic, but our conversation became quite animated and our attention on the radar waivered, as did our sense of time.   I had seen the ship on the radar 3 miles out.  We were closing rapidly.

A sense of impending danger drew me away from my conversation with the boat captain.  We both looked at the radar which was now set on the .5 mile scale.  There was nothing there.  I looked up through the forward window of the pilot boat, and saw something.  Close.  It was big, it was grey and it was heart stopping.  My ship was almost dead ahead, 100 feet away.  At our combined speed of 26 knots we covered that distance in less than two seconds. 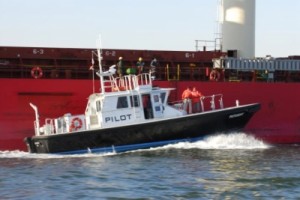 Approaching a moving, eight hundred-foot foot ship in a small pilot boat can be challenging, especially when wind and sea state are less than cooperative.  The credit for this challenging small boat handling goes to pilot boat coxswains.

It wasn’t seamanship that averted disaster that day.  It was, quite literally, pure blind luck. We went right down the port side of the inbound ship less than 50 feet away.  The pilot ladder was rigged on the starboard side of the ship, so the pilot launch rounded the ship’s stern, and advanced to the hanging ladder.  The boat operator laid the boat alongside the ship, and I boarded.  There was no question that the three of us were shaken by what had almost happened. To the crew on the ship all appeared normal, if not a bit close.  The personnel in the pilot tower likewise noticed nothing out of the ordinary.  After all, it’s what pilot boats do.  Go to the ships. 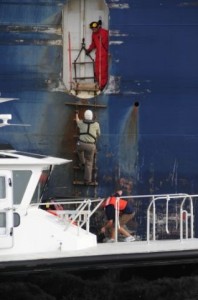 Captain Band has climbed the Jacob’s Ladder literaly thousands of times.  Still, it’s something he never takes lightly, he knows all too well that a misstep has cost many pilots their lives.

We had plenty of opportunity to discuss our near miss.  It is not common practice for pilot boats to approach invisible traffic end on, or at such a high rate of speed.  However, what struck me as the real culprits in our near collision were complacency, and lack of situational awareness.  So often, both seem to go hand in hand.  The pilot tower’s informing us of an uncomplicated traffic situation, the calm wind, and the boat operator’s skill at negotiating Lynnhaven Inlet all relaxed my vigilance.  I had made hundreds of trips to ships in the pilot boat; scores of them in inclement weather.  But for the lack of visibility, this trip seemed routine.  Yet, the lack of visibility should have been our wake up call to pay close attention and keep the pilothouse “sterile” of extraneous chatter.  In the last moments, our radar’s limitations at minimum range compounded our difficulties in recognizing our predicament; we could not see the ship.  We fell victim to what causes many mariners great misfortune.  We failed to recognize that we were the problem. 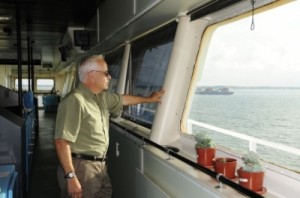 Bill Band has been a member of the Association of Maryland pilots for nearly four decades.  A 1971 graduate of the State University of New York Maritime College at Ft. Schuyler, earning a B.S in Marine Transportation, Bill began his career as a Mate on the Cape May Ferries, which in the 70’s were 3500 ton steam ships.  He then went on to work as Mate on the pilot boat Baltimore, a 200-foot station vessel at the Virginia Capes.  He holds licenses as Inland Master, any gross tons, 3rd Mate Oceans, and First Class Pilot any gross tons for the lower Delaware Bay, the entire Chesapeake Bay and tributaries, and the C&D Canal.  Bill estimates he’s piloted over 4000 ships in his career and spent over 40,000 hours doing it, ranging from tall ships to 1200 foot cargo vessels.  He is an avid recreational boater and owns a Monk 36 named Brighter Days.