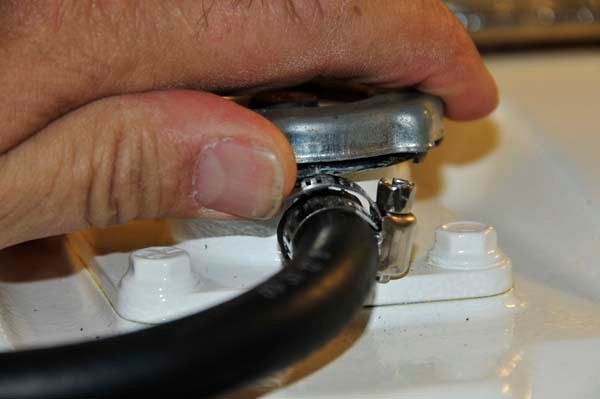 The opportunity for injury aboard any vessel, cruising, commercial, power or sail, is vast.  Tripping, falling and especially falling into open hatches are among the most common.  Bumping one’s head, particularly on sharp overhead objects, a pet peeve of mine, is also very common; I routinely complete a two day inspection with a series of bumps and cuts on my noggin.

A few years ago, as I conducted checks in an engine room while underway, while in stocking feet, my foot slipped off the deck and made contact with the rotating shaft coupling.  The coupling was equipped with a set screw, which in turn was secured with seizing wire.  The bitter end of the wire was sharp and hook-shaped; it caught hold of my sock and ripped out a wad of fiber.  Other than my heart skipping a beat I was unscathed, however, it was a powerful reminder to use greater caution when working in an engine room while underway, and good reason to wear shoes in engineering spaces, which I now (almost always) do.

Bumps and bruises are one thing, scrapes, cuts and deep lacerations are another.  The environment encountered aboard a vessel can be septic; especially bilge and engineering spaces.  Heaven help the poor soul who manages to break his or her skin while working on a sanitation system, as the likelihood of infection is both very high and potentially dangerous; which brings me to this month’s topic, hose clamps, and the many hazards associated with their installation.   By their very scythe-like nature, hose clamps represent an injury potential, and for that reason care must be used when they are installed, particularly in areas where fingers, hands and forearms may make contact with them, adjacent to seacocks, under galley and head sinks and on engines.

In the accompanying image, a hose clamp is installed in such a way as to almost guarantee injury to those removing this cooling system pressure cap.  Reorienting the clamp, using a shorter clamp, bending the free-hanging tab down into the band or installing a hose clamp finisher, a silicone rubber cap that covers the sharp exposed end, all represent ways to improve the safety of this and other similar hose clamp installations.  Inspect your hose clamps and make them safe for you and others working around them.

Based on your analysis of my boat I am replacing some of my battery cables.

I bought a nice set of lug crimpers, got some good quality Ancor tinned cable and lugs, but cannot for the life of me figure out the best way to strip the insulation off the cable. Besides just using my pocketknife or a box cutter, which has a strong chance of cutting of some of the strands.

What is the best tool for stripping insulation off of battery cable in the size of about 4/0 to 1 AWG?

I already have strippers you recommended for smaller gauge wire.

Thank you once again for all your help,

You are right to avoid using the box cutter, or knife, as these will almost certainly cut or damage strands.  Proprietary battery cable strippers are available, the one I use will strip cables up to 4/0, and it works very well, it’s available from Del City, www.delcity.net part number 940405.  The stripper is adjustable to account for differing cable insulation thickness.  Experiment with the cable you are using on a scrap to set the depth, to remove the insulation without damaging the wire strands.  Once it’s set, as long as you use it on the same type and brand of cable, the adjustment will remain correct.

As an aside, after completing a crimp, under no circumstances should you be able to remove the crimp from the cable, no matter how hard it’s pulled on, and you should test each one in this fashion.

Just read Nigel Calder’s article in PassageMaker Magazine about stacking inverters to smooth out and supplement a smaller generator for high start loads.

My magnum inverter (not installed yet) is not stackable.  I am taking a look at the Victron products showcased in his article.

I didn’t know this capability existed before, but it seems to me that by stacking 2 inverters and thereby supplementing the generator to meet high 240 start loads (e.g. AC), I get the best of all worlds – a smaller generator and running 240 “appliances” such as the Grunnert pack or an electric BBQ grill off the batteries.

When the inverters decide the banks are too low, the generator is auto started to charge them. This keeps the generator running at a nice load rather than just biding its time most of its life waiting for a start load, the rest of the time running way under loaded.

We had redesigned the electric system into 2 shore cords, one dedicated to AC, the other for everything else. Seems to me we might even be able to lose the second shore cord with this system at the same time as stepping down from the 20kw northern lights to something substantially smaller.  Maybe that’s going too far, but if anything I could really reduce the size of the genset.

Where are the pitfalls here?

You’ve posed some good questions, and wisely asked about the associated pitfalls.  Let’s begin with the argot of inverters, as I believe you are mixing or misusing inverter terminology.  “Stacking” refers to increasing inverter capacity by ganging or connecting two or more units together.  Most modern high quality inverters, including Magnum, are capable of being stacked.  Stacking in parallel simply increases capacity, essentially more 120 volt capability Series stacking can provide 120/240 volt capability, enabling you to operate 240 volt appliances from an inverter.  Not all inverter models are capable of stacking and load share/support, however, it’s often not necessary as large single inverters are available.  Caution is, however, the watchword, as the battery capacity to operate these loads could be substantial.  In many cases this arrangement is used to operate both light and heavy loads, 120 and or 240 volts, while the engine is running, and supplying DC current to the battery bank via a high output, externally regulated high output alternator.

Load Support on all MSH Magnum models is also related to the shore or input AC amps setting. Again Output loads are the priority. The charger amps will still reduce to 0 but with the MSH the inverter will pull current from the batteries in order to support the AC input amps. The Load Support mode will continue until the batteries reach +.5VDC ABOVE the Low Battery Cutout set for the inverter.”  This arrangement can be used to support or augment either shore power or a generator, particularly during momentary, high current start up loads.

Victron has received a great deal of press (thanks to their cooperation with Nigel) for its ability to do this, however, once again, thanks to the growth in photovoltaic energy generation, most modern inverter manufacturers offer this capability, including Magnum.  Most of these manufacturers produce far more gear for this industry than for boats, which is good because if they were making it only for our needs, their research and development funding would be much smaller, and consequently inverters would be far less capable than they are today, and more costly.

Using the load support/sharing function, yes, it is conceivably possible to install a smaller generator.  The cost savings in installing a smaller genset may be marginal, however, as it’s offset by the need for a larger, more capable inverter.  However, there are other benefits, chief among these being a heavier load being placed on the genset, staving off the effects of chronic under loading (a subject I’ve written about on several occasions, most recently for Professional Boat Builder Magazine http://www.proboat.com/why-you-shouldn-t-go-easy-on-a-diesel.html

Additionally, while generator auto start sounds attractive, it can be complex and even dangerous.  In order to operate without unduly stressing the genset, the auto-start/stop mechanism must be able to disconnect and reconnect loads before starting and stopping the genset, i.e. it should not be started or stopped under load.  Also, the notion of a generator starting and stopping automatically gives some genset manufacturers, engineers and marine systems consultants, i.e. me, pause.

Finally, keep this in mind, if you opt for the load sharing route, it’s a technically sound approach, if your inverter packs it in, you have no redundancy, which means you may not be able to use air-conditioning…while on vacation in the Bahamas; not a pleasant thought.  It is here that Nigel, a colleague and friend, and I differ, he takes more of a shop bench, knows his own boat and its systems, theoretical approach (we need folks like this to investigate and adopt bleeding edge technology), while I, as a former marine electrician and mechanic, and boat yard/boat building shop manager, take more of a ‘from the trenches’ bullet proof, been there done that, redundant tack.  You must be the judge as to which route you will follow.

Just read your post on potable water systems.  Your suggestion of a high volume pre filter when filling the tanks makes a lot of sense.  In a quick look for possible filters of this type, all of them touted chlorine removal as a positive property of the filter.  Can you suggest any brands that would not have this property?

I’m not surprised filter manufacturers tout chlorine removal as an attribute, typically it is, with water being used to fill tanks being an exception.  The vast majority of filters are designed to filter water as it’s being used, rather than prior to storage.

The active component in chlorine removal is the charcoal filter, without it chlorine content is unaffected.  Therefore, if you select a filter that does not include a charcoal element, chlorine won’t be affected.  Essentially, what you want is a single or double stage particulate filter, and nothing more.  If it’s going to be used on the dock, be sure the canister is opaque, to prevent the growth of algae within the filter.

I have a 50- year- old, 41’ Yawl and am planning to replace the propane system including the galley stove, salon heater and BBQ.

I would like to know what I should consider – dos and don’ts.

I have a feeling that you may have already written on this subject, but I am having trouble finding anything.

Can you let me know if there is already something out there or if this might be a topic that you might write about soon?

LP Gas systems can be tricky, and there’s no margin for error.  Above all else, it’s imperative that the work is carried out by a professional who belongs to ABYC and has access to the standards, specifically chapters A-1 Marine LP Gas Systems, A-3 Galley Stoves,  A-14 Propane Gas Detection Systems, A-24 Carbon Monoxide Detection Systems and A-26 LPG and CNG Fueled Appliances.  Furthermore, he or she must agree to carry out work in a manner that complies fully with these standards.  The system should, among other things, include LP gas and CO detection devices.

I wrote a detailed article on the subject of LP gas systems, links below.  It will likely answer most of your questions.