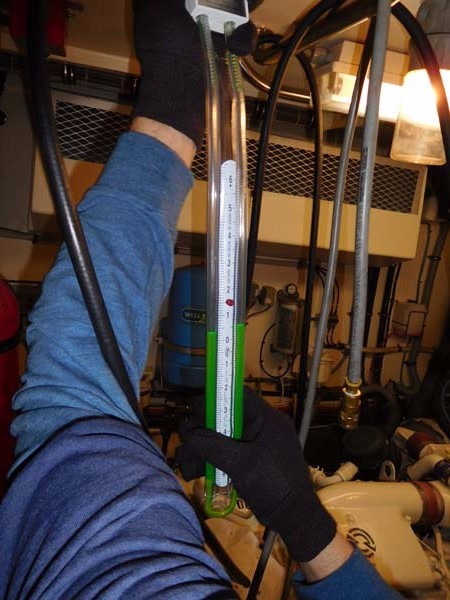 After a fall boat show hiatus, the SDMC Newsletter is back on watch.

It’s an all too common refrain, one I hear from survey mechanics on a regular basis, “I can’t measure back pressure, I don’t have the tools” or, among my favorite, “Why do you want to measure that, if it was wrong the engine would tell me”.  In fact, no commonly available recreational marine engine or genset measures back pressure.

Back pressure is a measure of the resistance or effort required to enable exhaust gasses to travel from the engine to the point at which they exit the vessel, the hull side/transom for a wet exhaust, or the top of the dry stack for dry exhaust.  The more resistance that’s present, the more effort that’s required to move these gasses, and water for wet exhaust systems, the harder the engine must work.  The horsepower expended on exhaust gas and water removal isn’t available to the prop, effectively robbing propulsive power from the engine. The result is often an inability of the engine to achieve its maximum rated rpm.  Additionally, excessive back pressure can increase an engine’s harmful emissions, violating EPA (Environmental Protection Agency) guidelines.

In many cases those commissioning a new vessel incorrectly interpret this as a miss-match between engine and propeller; they then proceed to reduce propeller pitch, which, while increasing the rpm, masks the underlying problem.  It’s a case of fixing the symptom rather than curing the disease, hence the need for a definitive back pressure analysis.

Measuring exhaust system back pressure is among the easiest and most valuable tests you can perform during a sea trial.  The information it provides will allow a user, or buyer, to quickly determine if the vessel’s exhaust system is properly designed, installed and free of defects or heat damage, and the tool required to measure it is simple and inexpensive, you can even make one yourself.

A water tube manometer, shown in the image that accompanies this column, is no more than a length of clear tubing and a scale.  The test does require accessing the dry section of the exhaust system after the turbocharger, and before the mixing elbow of a wet exhaust system.  Every marine propulsion diesel exhaust system should be equipped with test port; sometimes they are hidden under blanket or wrap insulation.  On older engines removing them can be tricky, particularly if a steel rather than stainless or brass plug has been used.

Generators can also suffer from excessive back pressure.  While few small genset exhaust systems include test ports, if necessary they can be drilled and tapped.  Manometers are also available in analogue, mercury and electronic formats.

When a mechanic tells you he or she can’t measure exhaust back pressure for any other reason than the test port isn’t present, look for a new mechanic.

Thanks for your answer on raw water algae prevention.

Do you have an opinion on replacing the conventional 30 amp shore power cable plugs from Marinco/Hubbell/ Charles etc with the 30 Amp SMART PLUG?

It’s so very unlikely as to be a virtual non-issue.  The fact is the bonding wire on the strainer will only prevent stray current corrosion, which is rare unless the strainer is submerged in bilge water.  The strainer is much too far from any of the sacrificial anodes to be protected by them.  If it’s a good quality strainer (I prefer Groco ARG models) made from zinc-free bronze, it’s unlikely to be a problem

Having said that, you can try the copper in the basket with the bonding wire connected first, if it works, leave the wire in place.

I like the Smart Plug.  I’ve written about it a few times, here is one article in which I’ve made mention of it https://www.proboat.com/attention-to-detail-may-13-2010.html.

My disabled neighbor had a local mechanic change oil in his Volvo 280 DuoProp outdrive which only had about 50 hours use and later it would not shift right so had it inspected at another shop and they said it contained synthetic oil which damaged the bearings and other internals to such extent that it could not be saved.  Said that it contained metal chips, etc when drained.

They claimed that normal oil, when hot, will absorb the built-up moisture and that synthetic oil will not, so apparently the remaining water damaged the unit.  I cannot believe that story about the oil with only a few hours use on the outdrive and prior oil change a year earlier.  Is that possible?

How does the shop know the oil that was used is synthetic?  Also, no gear oil “absorbs” water.  While it may emulsify while underway, it ultimately separates, and either way it’s harmful.  Furthermore, Volvo specifies that only synthetic gear lube be used in many Duo Prop models; you don’t say which one is used here, however, a chart is available detailing lube requirements, it’s available here  http://www.volvopenta.com/SiteCollectionDocuments/Penta/Misc/drive_2_oil_rec_7745608.pdf.  Early Duo Props called for conventional API GL5, while late model Volvo stern drives, single and Duo Props, require synthetic oil.  It stands to reason, if it’s acceptable for those, why wouldn’t it be for others?  The only reason synthetics were not specified on old stern drives is it either wasn’t available yet, or it wasn’t available in the required specification.

Regardless, while using the proper gear lube is of paramount importance, it’s highly unlikely that using synthetic oil caused the failure unless it was the incorrect specification, i.e. the wrong weight or API rating.  There should be no water in the gearcase (and moisture doesn’t “build up”, it leaks in), and if there is a leak, and if there is water in the gear case, the bearings will come to grief quickly.  It’s possible that this is exactly what happened, water entered through a failed seal or bellows, through a fill or drain plug if it wasn’t tightened or if the O ring was missing or damaged.  However, it is highly unlikely that any type of oil could contend with the water, at some point the oil’s lubricity would be diminished, after which wear and heat would take their toll.

My name is Marc and I was going through your website and need an answer to this question.

What subsequent investigation would you make to find the cause and also find a remedy?

Without seeing the report, and knowing more about the engine, lube and unit time, application, and its use, it’s difficult to respond definitively.  However, these results are indicative of contamination of the oil with foreign matter, in this case common dirt, dust or sand (I presume you meant ‘silica’, and not ‘silicon’), which is then creating excessive wear within the engine, which in turn has led to elevated wear metal levels.  Iron comes from cylinder walls (and internal engine surfaces where no bearings are used), while copper and tin are bearing materials, and antimony is from bushings.

The engine’s air filter system should be inspected to make certain is in good working order and not dislodged, damaged or clogged.  The new oil supply that is used for this engine should also be checked to be certain it is not contaminated and is being dispensed from a sealed container.

For more on oil analysis you may want to read http://issuu.com/spinsheetpublishingcompany/docs/aug_pt_2015/25 and http://www.proboat.com/reading-oil-analysis-reports.html.

At what loading is it safe to run a mechanically-controlled diesel over the long run without shortening life span?

We are doing energy audits and find most displacement-hull vessels are grossly overpowered, using only 10 to a max 30% of available horsepower in normal operations. This results in excessive fuel consumption as well as unnecessarily high capital and maintenance costs, weight, and space use. It may contribute to shortening engine life, though we don’t have data to prove it. Our data suggest that advice to owners should be to “right-size” engines at new construction or repower time, choosing models rated at only about 120% so of actual power demand for hull speed plus parasitic loads. That is, under normal operating conditions the engine should run at around 75-85% of maximum rated power for peak efficiency. Is it safe to run contemporary mechanical (or electronic) diesels, not necessarily continuously but consistently, at that power setting?

Congratulations, through careful analysis and good engineering you’ve identified what escapes so many boat builders, over-powering, and thereby chronic under-loading, is wasteful and detrimental to engines, potentially shortening their lives and increasing maintenance costs.

Your question regarding safe, long-term loading is, or could be, a function of an engine’s M rating, as well as each manufacturer’s recommendations for extended use.  This is a function of the ‘conservativeness’ of an engine’s design, which is somewhat subjective.  M rating, on the other hand, is objective.  The lower the M number, the higher the duty rating, beginning with M1, which is rated for full power 24 hours per day, in other words very conservative.

† Cruising is any operating time where the engine speed is more than 200 rpm less than the maximum attainable engine speed.

Possible applications: Recreational boats in the U.S., tactical military vessels, and rescue boats outside the U.S.

† Cruising is any operating time where the engine speed is more than 200 rpm less than the maximum attainable engine speed.

Finally, an engine’s ability to operate at a given load is, or should be, irrespective of whether it’s mechanically or electronically injected. Electronically controlled engines are somewhat better at contending with light loading, however, they are not immune from its effects.  For more on this subject see https://stevedmarineconsulting.com/the-perils-of-chronic-under-loading/