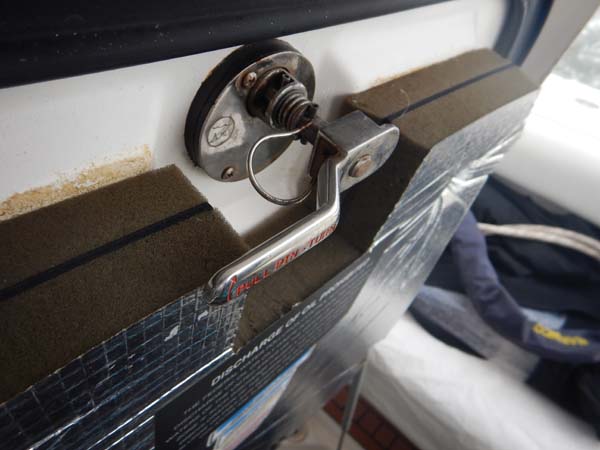 The recent fire and resulting fatalities aboard the dive boat Conception, (covered in an SDMC MSE editorial here) drove home a number of points for many boat owners and some boat builders, including the need for smoke alarms, the importance of sound wiring, and the potential risk of charging portable lithium ion batteries. Although there is a suspicion this fire was related to portable battery charging, the exact cause has yet to be determined; it may never be known. On December 1, the captain of the vessel was indicted on 34 counts of seaman’s manslaughter.

One additional area was scrutinized in this event, the presence of reasonably accessible escape routes. In the case of the Conception the escape routes, one of which it has been alleged was not easily accessible, both led to the same deck.  This is a problem if that deck itself is involved in the fire, which is exactly what investigators suspect.

There are ABYC, ABS and other standards that govern vessel escape routes, but most don’t apply, at least not legally, to small, non-charter, private recreational vessels.  That however, doesn’t mean you can’t apply them to your own vessel.  Ask yourself if there are two paths of escape from every cabin, and if so, do both lead to another common space, and if so, what is the alternative if that space is engulfed in a fire or flooding?

One area that is often overlooked, where escape routes are concerned, is the engine room and lazarette.  In many cases, the latter is connected to the former, making it a potential escape route if a cockpit or deck hatch is present.  The problem, however, is most of these hatches are designed to be opened from the outside rather than the inside.  In the accompanying image, the dogs of this cockpit hatch are designed to be quickly and easily removed by withdrawing a pin, which releases the dog and then the hatch, enabling an occupant to escape in the event of a fire or flooding.  Escape mechanisms like this should be easy to operate, you should be able to do so without the use of tools, and with your eyes closed, and they should be tested at least annually, to ensure pins or other unused mechanisms don’t become seized.  Make certain all aboard are aware of them, and that they understand how they operate.

A while back I asked if there was a device that could resolve all charging sources into one voltage ie 14.4 for AGM’s, and apparently there is not. This solution to a constant charge voltage is from the RV world. Apparently some are using the alternator output to power a converter which in turn powers the (adjustable) charger. Might there be something in this that is applicable to the boating world?

I don’t have any specifics on what others have installed; but as a generality RV stuff is not marine quality. So I guess I’m asking is there any validity with the concept and using a popular brand marine charger and inverter.

If it’s what I think it is then it’s a proprietary alternator that outputs 48 volts DC, which is then channeled directly to its own inverter which rectifies that from DC to AC.  These devices are used by the Coast Guard on their 45 and 47 MLBs and the army uses them in Humvees.   http://www.meps.com/

Using one of these, or an inverter to charge batteries from an engine is very inefficient, as you are converting the alternators DC output to AC, which a charger uses, and then the charger is converting it back to DC, with all the losses incurred along the way.  Inefficiency aside, the charge it provides is no better than a multi-stage externally regulated alternator charging the batteries directly.

They are really designed to take the place of an AC generator while underway.

I am traveling in New England and on the way up, I noticed that the voltage on my starboard Lugger engine (I have one of the two twin engine Kadey Krogens) was lower than the other engine, 12+ volts vs 13 1/2 on the other, after it warmed up.  I watched it until one day I noticed that it dropped below 12 volts.  I went into a yard in Belfast, ME where the mechanic said the alternator needed replacing.  It started out to match the other engine but within an hour after I left the marina, it dropped back down to below 12 volts.  The yard came by boat to the next town and tested the alternator that put out about 14.5 volts but said that the exciter wire was a little corroded.  He sanded the connection, we started it up and it seemed normal.  I ran the boat for two more days and it was normal.  The third day it dropped off again.

I am currently in a yard in Fairhaven, MA where the electrician had me run the engine.  He said the voltage output was about 14.5 volts but after three minutes the alternator was running hot so he removed the new alternator to take to their alternator shop.  I have not heard back from them yet

Any ideas what could be causing this issue?

How hot was hot?  If it was working hard to recharge a depleted battery it may get hot, especially if the engine is running comparatively slow.  It’s not unusual for the stator, the band around the center of an alternator, to reach 200F, and even 250F under heavy load.

Is the alternator externally regulated?  I suspect not based on the excitation wire comment, however, if it is, if the tech meant ‘field wire’, is the field voltage at maximum, i.e. full battery voltage?  If so, it means the regulator is calling for maximum charge, and that would cause it to  get hot.

Are both alternators connected to the house bank?  If so, one alternator often shuts down in the presence of charge from the other alternator.  Was this alternator tested with just this engine running?

The alternator shop should run the alternator at the rpm you normally operate at cruise speed (alternator rpm, not engine rpm).  That will take a little math to determine, using the pulley sizes to establish a ratio.  Doing so will ensure an accurate test.

I very much enjoy your advice in your articles in your “eMagazine” and look forward to reading your articles.  I purchased a 1985 KK42. The previous owner did a lot of work on this vessel, and amongst other things, replaced the black iron fuel tanks with 2 X 200 gallon and 2 X 180 gallon aluminum fuel tanks.  He also installed an ESI fuel polishing system.  To my amateur eyes, the work looks very well done.  However, I think the main problem with the fuel polishing system is one tends to do it in calm conditions while at the dock, or at anchor. Any “sludge” will be on the bottom of the tank and there is very little agitation inside the tank to release the sludge and “polish it out”. At least that’s my intuitive understanding. I replaced the polishing element once and there was no asphaltene on it.

So I think I need to bite the bullet and inspect the tanks prior to refueling.  We’ve had the boat since 2013 and I believe the tanks are now ~7 years old and I don’t think the ports have been opened yet.  Is this something that the owner can do, prior to refueling?

I can move the remaining fuel to one of the 200 gallon tank and work through the tanks one at a time.  I read in an earlier article and that you discouraged use of absorbent oil pads as they shed fibres, so I have no intention in using them.  So how should I go about doing this? Or should I engage a professional?

Another related question:  What additive do you recommend for diesel fuel for naturally aspirated, non-electronic engines? Do they make a difference? Do they inhibit the formation of asphaltenes?

I would not discourage you from inspecting the inside of your tanks, particularly if the vessel has been dockside frequently, and in a sub-tropical climate.  That combination can induce sediment and water collection on tank bottoms.  Having said that , if you are using the vessel in a seaway, and filters are not clogging prematurely (you should be able to use 1,000 gallons of fuel without the vacuum reading on the filter exceeding the change threshold, about 5 in, of Hg), then it’s unlikely the tanks are contaminated.

Polishing systems can and should be used while underway.

I agree, the polishing system appears to be professional and well-installed.  The manner in which it is plumbed to the tanks, however is of paramount importance.  In order to be effective, it should draw from the bottom of one end of a tank (drawing from an area lower than the primary engine fuel pickup), and return to the bottom of the other end of the tank, thereby inducing a “current”, and stirring up sediment, which the filter can capture.  Plumbing should be completely independent of the engine and genset fuel supply and return.  This article provides additional details.

As far as tank cleaning is concerned, for badly contaminated tanks a hot water pressure washer is my weapon of choice.  While it’s typically the purview of professionals, a very savvy do it yourselfer might undertake this.

For light contamination, scrubbing and scooping the inside of the tank using a non-metallic brush and scrapers, and then finishing with lint-free cotton rags works.  If the inside of the tank is “speckled” with weld slag, use caution when wiping with rags, if they are leaving behind fibers then discontinue their use and simply scrub/scrape and rinse with clean fuel.  There are host of other precautions which must be followed when undertaking this type of work, including wearing eye protection and gloves, supplying ample fresh air, properly disposing of waste fuel and sludge, etc., and while diesel vapors are not generally considered explosive, under the right conditions, i.e. hot and atomized, they can form an explosive mixture.  Pumping fresh air into the tank continuously before and during the cleanout process reduces this risk.  For more on tank cleaning see this article.

Finally, I would argue that there is no need to cover fuel tanks in an application such as this with insulation; the sound attenuation advantage it provides is marginal.  If the insulation is adhered directly to the tanks it violates ABYC’s installation recommendations, as it can capture and hold water against the tank, which could lead to corrosion.  Personally, I like to be able to see as much of a metallic fuel tank as possible, especially if it’s well-made.

I am having difficulty finding a source for aluminum pencil anodes for my heat exchanger (for a Ford Lehman 120).

Do you have any recommendations?

While I’m an advocate of aluminum anodes, I don’t recommend using the pencil variety in heat exchangers.  In the normal course of their operation, aluminum anodes often generate a surface foam or froth.  The material does not hinder the anode’s effectiveness, however, it can make it difficult to remove for pencil anodes for inspection.  Unless you are operating strictly in fresh water, I would recommend sticking with zinc for these applications.

It’s important to remember, the anodes used in engine, genset and other inboard heat exchangers are effectively in a different body of water than those on the hull, and as such there is no interaction between, or cross protection of, the two even when bonded.  You can safely use aluminum hull anodes and zinc heat exchanger anodes.  While mixing anodes in the same body of water is not recommended, it too is not harmful per se, as the aluminum anodes tend to protect the zinc anodes until the former are depleted.