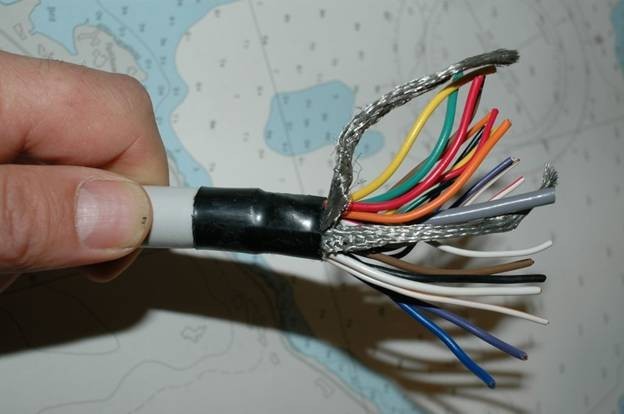 Electrical interference can take on several forms, including electromagnetic or EMI, and radio frequency, or RFI.  In the latter case, placement and the interrelationship of antennas plays an important role.

On more than one occasion I’veresponded to complaints that start with the observation “when I key themicrophone the boat makes a hard turn to port/starboard” or “there are wavylines on my TV screen”.  It’s a phenomenon I’ve encountered on a number ofoccasions during my marine industry career.  The causes are simple and easilyunderstood, while the solutions can be maddeningly elusive.  The side effectscan be everything from static or distortion on an otherwise high qualitytelevision screen to humming or buzzing on a VHF radio and in some casesmalfunctions in autopilot control systems, some of which may be dramatic, toname just a few.  In one case, aboard a boat whose construction I was involvedwith, the windshield wipers activated themselves each time the windlass wasused.  After some investigation, and ruling out any inadvertent crossconnection between switches, it was determined that the control cable for thewiper’s electronic membrane keypad was run alongside high current carryingcables used to supply the windlass.  Separating these wires and having themcross each other only at a right angle where it was necessary resolved theproblem.

A few years ago I attended aseminar on the subject of advanced electrical and electronic troubleshooting,one of the sub-topics of which was indentifying and resolving electromagneticand radio frequency interference, otherwise known as EMI and RFIrespectively.   The fact that this subject represented a major portion of thepresentation, and generated the most questions from the audience, is tellingindeed.  Distilled into a single phrase, cruising vessels have becomesignificantly more complex, especially electrically and electronically, in thetwo and a half decades I’ve worked in the industry.

Paralleling disparate cables, a practice that is difficult to avoid on many vessels, can exacerbate interference issues.

Unfortunately, the industry itself,while becoming adept at selling and installing the gear, hasn’t kept pace withprevention, mitigation or resolution of EM and RF interference issues.  Notlong ago I received an e mail from a reader, referencing a recent column on thesubject of high output charging systems and their associated wiring, whichexemplified the interference issue.  In part, it reads;

Many high output alternators use an isolated ground terminal and specify thatthis ground be brought back to the battery bank. If this is done, the charging meter does not work correctly. The ground needs to go to the Shunt on the sideaway from the battery.

Top: Paint is an insulator, which makes installation of electrical terminals over painted surfaces undesirable.  Bonding terminals should always be installed over clean, paint-free surfaces.  Using a conductant paste and then coating the completed installation with corrosion inhibitor further improves conductivity andreliability.

Bottom: Radio frequency energy travels on the surface of cables, which is why copper foil is often used instead of wires.  A conventional cable has been attached to this SSB antenna tuner ground stud, significantly reducing its effectiveness.

2. We had a problem with the CruiseCommand (ZF Marine) on our Nordic Tug 37 recently. Both ZF Marine and Cumminspointed to the Balmar Alternator as being a source of electromagneticinterference and the source of the problem. It was determined that there was aproblem with the CruiseCommand unit and a replacement board was exchanged.However, we did find that the case of the CruiseCommand was not bonded. Balmaralso suggested adding “drains” to the positive alternator output aswell as spiraling the ground wire for the MC-612 harness to affect a drain forit, as well. I point this out, because this may be a concern for others aswell.

To this, I responded:

Thanks for your note and commentsregarding high output charging systems.  Indeed, you are correct, if ashunt-style ampere or amp-hour meter is used, all negative cables, both housesupply and charging, regardless of charge source, must be attached to the sideof the shunt that is not connected to the battery.  This is a commonprotocol and one that’s well understood by experienced marineelectricians.  I’m a strong advocate of including negative output cablesin high output alternator installations as well as wiring both positive andnegative output cables directly to the house bank to minimize loss as much aspossible.  Engine blocks and attached components are typically made ofiron and steel, which are a poor conductor when compared to properly-sizedcopper cable.  Thus, sending alternator output current via this path isundesirable.  It’s important to remember that positive and negative cabling runfrom an alternator or battery charger  (or any high current consumer orproducer ) to a battery bank must be routed in such a way that they remain veryclose to each other, touching is preferable, to minimize the production ofelectromagnetic interference.  Interestingly, separating the cables, often by just a few inches, while maintaining their parallel paths can actually amplify the production EMI.

A common installation oversight, sensitive satellite receivers should not be installed in the swept path of radar scanners.  In addition to potentially interfering with their operation, doing so can overload these receivers (it’s also discouraged by most satellite transceiver manufacturers), leading to their failure, which is often chalked up by electronics technicians as a ‘surge’ or ‘lightningstrike’.

As far as the alternator acting as asource of electromagnetic interference, this is true to an extent, however,virtually all electrical gear, especially electric motors, generators andtransformers as well as cables carrying high current, has the potential tocreate EM and/or RF interference including starters, inverters, chargers,radar, single sideband and VHF radios etc.

Not all metal chassis components are equipped with bonding connections.  However, if they are, it’s safe to assume the manufacturer intended that they be bonded.

Provided a few anti-EM and RF interferenceprotocols are followed, this won’t present a problem.  In my experience it’srare in modern high output alternators, Balmars included.  For example,the alternator output cables should not be run parallel and adjacent to controlcabling for any sensitive gear such as and especially electronic shift andthrottle controls, engine instruments, autopilots, thrusters and windshieldwiper circuits to name a few as they can lead to interference-inducing currenton these cables.

Occasionally an alternator’s regulator cansuffer from interference caused by nearby equipment (regulators should not beinstalled adjacent to inverters for instance).  In these cases there gulator control harness negative wire can be wrapped around the other regulator control wires, however, these are small gauge wires, typically 16 gauge.

Cables like this one, used for a radar installation, are equipped with shielded conductors,wires run inside a braided shield, as well as a separate braided ground conductor.  Failure to properly connect these conductors can lead to poor radar performance, echoes, shadows and other anomalies.

The large gauge alternator output cabletypically requires no such treatment other than keeping positive and negativecables from a producer or consumer as close as possible to each other.  If highcurrent consumer or producer cabling are run parallel to other wiring this canlead to inductive interference, which, as mentioned previously, is best avoidedby separating these cables and wires.

Finally, as you mentioned, bonding allelectrical equipment, particularly equipment whose manufacturers specificallycall for this protocol, is a prerequisite in the battle against EM and RFinterference.  Because I’ve never encountered an instance where an alternator’ssuspected production of EMI caused damage to an engine’s electronic controlcomputer or related circuitry it’s likely that, in your case, the problem wascaused by the manner in which the gear was wired. Many new, electronicallycontrolled diesel engines are equipped with high output alternators, often asan option from the engine manufacturer, with no noticeable or undesirable sideeffects.

Another especially common and insidiouscause of interference for electronic engine control circuits involves theconnection of ground and bonding wires to multiple locations on an engineblock.  This practice should be strictly avoided for at least tworeasons.  First, doing so can induce current to flow through the block,which in turn could create problems like the one you experienced with yourcomputerized engine management system.  Second, if the engine’s own largegauge ground cable becomes disconnected, loose, corroded or otherwise compromised,starter cranking and alternator output current may flow through other small gauge negative/bonding wiring that is connected to the block.

Coaxial cableterminals are frequently improperly installed.  Both of the above examples are designed to be soldered at the center conductor and the shield, yet neither include any solder.  The result is a poor, high resistance connection, which causes RF energy to be transmitted in ways it was not intended.

It’s important to remember that currentflows through these wires under normal circumstances as electricity will takeallpaths back to its source, not just those of least resistance.  However,provided large gauge, low resistance cables are connected, they will safelycarry the bulk of the current.   If called upon to carry very highcurrent, a starter commonly draws 300-500 or more amps, the smaller gauge wireswill quickly overheat and burn, possibly igniting nearby flammablematerials.  To avoid both of these scenarios all bonding and ground cablesshould be connected to an engine block at a single point or via a single cableand then to a common ground bus bar.  If it is somehow disconnected orexperiences high resistance it’s likely the engine won’t start, which willalert the user to a problem and prevent additional damage from occurring.

Thus, it’s clear to see that this often vexing problem canlead to a variety of cascading, frequently difficult to resolve problems.  The discussion of EM and RF interference and its prevention could easily fillentire article or book chapter.

Top: Solid copper ground plates are most effective when their edge distance is maximized, i.e. along rectangle or “ribbon” is more effective than a square.  Edges should besharp, square and ideally a quarter inch thick.

Bottom: Ground studs found on electronics are often dismissed, even by professional installers, as optional or unnecessary.  However, bonding of this gear is often mandated by equipment manufacturers, and is necessary for compliance with guidelines established by the National Marine Electronics Association (NMEA).  You should insist upon it.

In short, however, followingrelatively simple EM and RF interference prevention protocols (in some casesthis involves no more than physical separation of equipment producinginterference from that which is being interfered with) during installation ormodification of a vessel’s electrical and electronic equipment often goes along way toward preventing the occurrence of these phenomena from the outset.