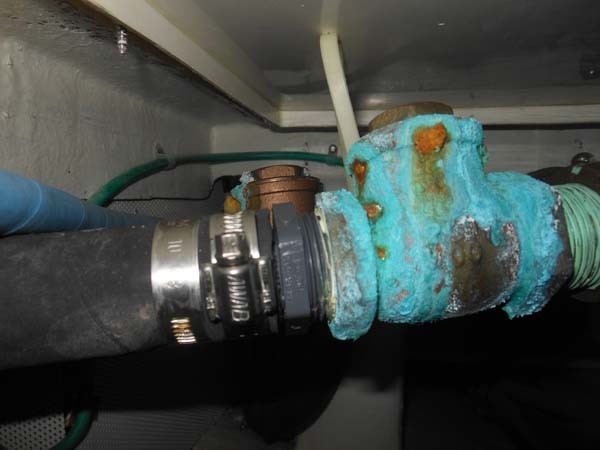 Check valves are ubiquitous; they are used in everything from fuel systems and toilets to bilge pumps and air conditioning systems.  While their versatility and usefulness is beyond question, they are not without weaknesses.

The check valves shown in the accompanying image are used in the air conditioning system’s raw water plumbing.  They’ve been installed to prevent raw water from flowing in the wrong direction, between the main and back up pumps, and to prevent these pumps from losing their prime, all of which is desirable.  However, valves of this sort, known as, ‘swing check valves’, rely on a metallic plate or gate and hinge or pivot pin.  When used in applications where water flows nearly continuously, or cycles on and off frequently, conditions that are routinely found in air conditioning systems, the pin tends to wear out quickly, and/or corrode.  Once it breaks, the gate falls free and lodges in the valve body, where it will block or impede flow, and where it will no longer serve as a check or preventer of back flow.  The insidious part of this is none of it visible from outside the valve.  Removing the valve cap is the only way to determine if the gate is still in place.  The pivot pin can also be removed via a small hex plug, not visible in this image.

In this case, the valves also appear to be leaking, the green patina or ‘verdigris’, which isn’t harmful by the way, being the give-away.  The brown accumulation, on the other hand is of greater concern, it’s indicative of iron, which has no business in a copper alloy designed for use with seawater.  Finally, a PVC pipe to hose adapter can be seen on the valve in the foreground.  With rare exceptions, because it lacks the necessary modulus of elasticity and tensile strength, PVC should not be used for raw water applications.

The COAX article was excellent. I especially appreciated the suggestion of leaving the Coast Guard alone for radio checks. They certainly have better things to do.

I would want to underline testing AIS transmit and receive. Over the last decade I have had two problems with my stern mounted (no splitter, not shared with radio) antenna (on the first, I never found the problem: just replaced the COAX, and the other I found a chafe exposing the shield). Both were discovered because I asked boats around me headed the other way to tell me via VHF when they lost my transmission. I also monitored when I lost their signal. Clearly, when the distance was markedly diminished from previous tests, there was a problem. I would say this should be done rigorously once a season and casually every month or so as circumstances permit.

Thanks again for your efforts to educate.

Ps. It may be wise to do the same for your VHF with vessels heading away from you, thereby getting a baseline for your vessel: noting antenna heights and receiving and transmitting on 1 watt, 5 watt and 25 watt on every VHF radio/station and with your handheld.

Regarding the need for a general alarm panel, I once built an alarm panel on my 43’ Viking using relays and indicator lights.  Pretty rudimentary, but I was being driven crazy not knowing what was beeping.  Water shallow, waypoint reached? Etc.  Your call for a better solution hits the nail on the head.  I hope the manufacturers listen.

The cable article was the best I have seen on what a complicated subject is really.  Still, it seems to me that there should be a call for a better connector than a PL-259.  We have all fought that problem for far too long and the new crimp-ons have failed me too.

I wonder if you have thoughts about the use of ‘prevailing torque’ locknuts on stuffing boxes.  I have a traditional flexible split stuffing box with two threaded rods that hold the two halves of the box together.  The traditional approach is to use an inner adjustment nut, backed up by an outer jam nut.  This is no problem on my main engine where stuffing box access is great.  But the wing engine, with its v-drive is another story entirely.  Access to the box is extremely difficult.  Getting two wrenches in there, one to hold the adjusting nut, the other to tighten the jamming nut, is just about impossible.  So, I am forced to settle for less than ideal adjustments, resulting in too little or too much drip.

A single ‘prevailing torque’ lock nut would be much easier to use, as it would require accessing with only one wrench rather than two.  The two types I would consider are either the Nyloc nut (nylon insert) or an all metal locknut such as the mil spec flex-top expanding locknut sold by Mcmaster-Carr.  Because of the better heat resistance, I think the superior choice would be all metal rather than nylon fiber.

Although this all seems logical to me, I’ve never seen it done on a boat (and I’ve been around enough to know that ‘seems logical’ and actually works are two different things!).   Do you know if this would be an acceptable installation?

Many thanks for your sage advice,

You pose a good question.  The failure to properly lock twin nuts against each other has been the source of more than a few flooded bilges, or worse.  There’s no reason to not use a self-locking nut, such as a Nylock or flex-top version.  The stuffing box should never get hot enough to affect the nylock, however, if over-tightened, or starved for water, it could, I’ve seen stuffing boxes get hot enough to generate steam.  Of course the nuts would have to be stainless steel, but beyond that nothing out of the ordinary.

We paint boats, cars, and planes professionally. Just read your article “Paint and Aluminum – How to Ensure a Good Mix” and agree completely. Do you have any advice for achieving a high bond strength between the aluminum and the paint? We have used DTM epoxy primers, etching primers, West Systems 860, and we are looking into using Alodine.

Thanks for your time.

Alodine 1001, a brand name for a chromate conversion coating product produced by the Henkel Corporation, is a commonly used aluminum preparation product/system.  I’ve used it and it does work well, however, my strong recommendation when using any two part paint system, particularly when painting aluminum, is to adopt one manufacturer’s products for the entire process, and follow their preparation and application instructions to the letter.  Read all of the literature available on the product and make certain you fully understand it; ideally speak with those who have used the same system.  The best two part paint applicators are part artist, part chemist, part researcher assistant.