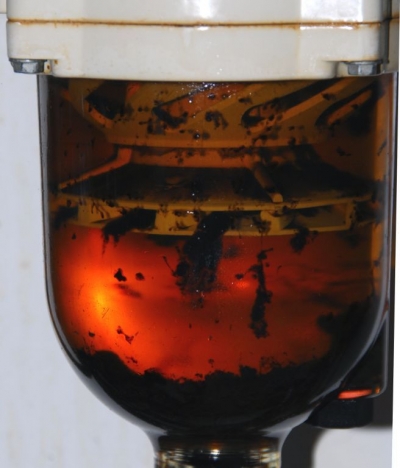 Story and photos by Steve D’Antonio 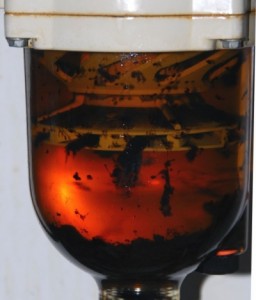 The debris in this filter bowl is a sure sign there is trouble in the fuel tank. If it isn’t addressed the contamination will rear its head, most likely when it gets agitated while in heavy weather.

It’s no coincidence that fuel and fuel filtration are among the most frequently discussed subjects where diesel engine maintenance is concerned, as they are most often the source trouble.  In fact, taking into account statistics as well as my own anecdotal experience as a mechanic and boat yard operator, fuel, either a lack of it or a contamination there of, accounts for more engine problems than any other single source. 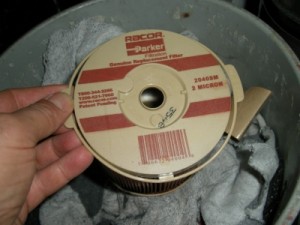 This two-micron primary filter is less than ideal and lacks compliance with most engine, and the filter, manufacturer’s recommendations. A ten-micron element would be a better choice to both filter larger particles and spread the filter media load across the primary and engine-mounted secondary filter.

The good news is, nearly all fuel related problems are well understood and most can be dealt with by judicious use of filtration.  The comparatively inexpensive fuel filter element is all that stands between you and potentially serious engine problems.  The key to proper fuel filtration is to approach it in a sequential fashion, a process known within the industry as multi-step filtration.  Industries whose manufacturing processes call for large quantities of ultra-pure water, such as pharmaceuticals and electronics, obtain it by using multi-step filtration.  That is, the fluid moves through progressively finer filters, rather than passing through the finest filter first.  At the risk of being branded a heretic and incurring the wrath of cruisers everywhere, I’m suggesting that you use two filters of sequentially finer filtration, the first or primary being a 10-micron rating, while the secondary, the filter that’s on the engine, is predetermined by the engine manufacturer, typically at 2-microns. While this may be anathema to what you’ve been told and what you’ve been doing for your entire cruising career, most folks steadfastly refuse to relinquish their 2-micron primary filters, there is a method to the madness; a method that is accepted and in many cases mandated by most fuel filter and engine manufacturers. 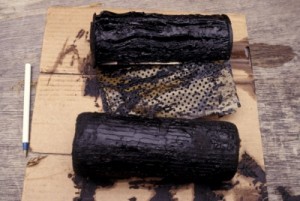 Fuel filters are capable of retaining a tremendous amount of debris while continuing to deliver fuel (remarkably, these filters were taken out of a vessel whose engines still ran). The operator was fortunate to make it safely to port.

There are two reasons for taking this approach.  First, fine filters, those of the 2-micron rating for example (a micron, by the way is a millionth of a meter; by comparison a grain of salt is 100 microns, and a human hair 70, while bacteria measure about 2 microns) are much better at filtering out fine contaminants (usually asphaltene, a naturally occurring tar-like substance found in diesel fuel) if they are called upon to filter out only fine contaminants. Here’s a useful analogy.  If you took a bucket and punched a few small holes in the bottom and filled it with fine sand and then poured water into the bucket, some sand would leak out of the holes at first, but then the sand would stop and eventually only water would flow out.  If, however, you filled the bucket with a mixture of gravel and sand, chances are the sand would continue to flow out of the holes because the gravel would keep the path open.  Multi-step filtration works much the same way; segregating the contamination between coarse and fine filters, where they both work more effectively.  The second reason for taking this approach is that if you capture all the debris, coarse and fine, in the first filter, the second filter really does very little and thus you’ve effectively halved your filter surface area, and the ability of your filtration system as a whole to capture and hold contamination while still allowing fuel to flow to the engine. 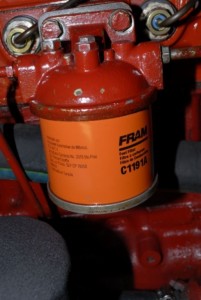 Fortunatly, most engine manufacturers have moved away from this sandwich-style filter as they make a mess when changing and are difficult to bleed.

The primary argument of most cruisers against this approach has more to do with convenience than science. After I’ve explained this to them, the refrain often goes something like, “I hate to change the filter on the engine, it’s hard to get to and I’m afraid of allowing air to enter the fuel system.”  Point taken and I agree – some of these filters are a bear to service.  If you’re in this camp, you have one of two choices, keep using a 2-micron primary filter knowing that it’s not the most efficient approach (it may have to be replaced more frequently) and that it probably doesn’t comply with your engine and filter manufacturer’s recommendations or, install another filter, one that’s more easily serviced, after your primary but before the on-engine secondary and lift pump. Within this filter install, a 2-micron element, and voila, you now have easily serviced, multi-step filtration.  As an added measure of precaution, replace the on-engine, now tertiary, filter seasonally or before winter lay-up. 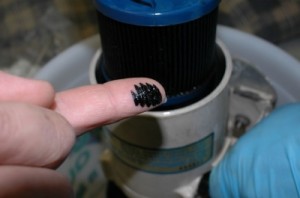 Remember, if your fuel filter is contaminated, it’s likely the fuel tank is as well. Dealing with this problem requires more than filter replacement, it calls for accessing and cleaning the tanks,  a subject we’ll cover in a future Marine Systems Excellence Blog.