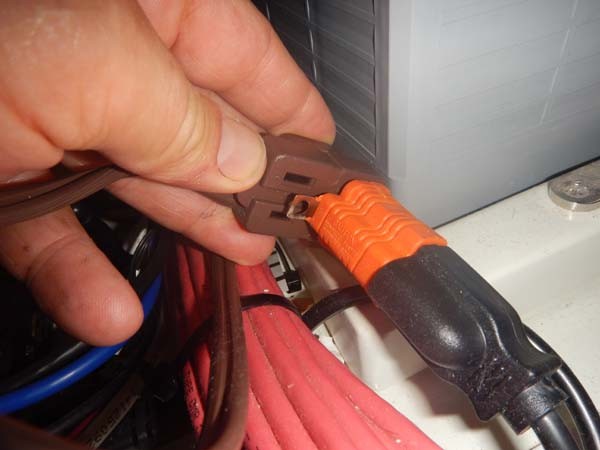 Most folks, even those with little or no understanding of electricity, understand that having a ground within an electrical circuit is important, but few understand why.

A ground can be thought of as a gutter of sorts, which allows excess water to flow safely away from a building, avoiding flooding.  However, where electricity is concerned that “flooding” can prove fatal.  Contrary to popular belief, electricity does not seek ground, it seeks to return to its origin.  If that origin is referenced to ground, then it will use the ground as its return path.

The metallic enclosures of most electrical equipment and appliances, from inverters and battery chargers to toasters, microwave ovens and washers/dryers, are grounded.  Grounding these enclosures enables a fault, an energized or “hot” AC wire that makes contact with them through chafe, crushing or another means, to be safely returned to its source, whereupon it will trip a circuit breaker, rendering the fault safe, sometimes referred to as ‘clearing a fault’.

If, however, the ground has been eliminated from the circuit, a fault that energizes a metallic enclosure, will remain present, lying in wait for something, or someone, to bridge the gap between it and ground.  It is for this reason that AC safety grounds are so very important.  If, for instance, a person were to touch a faulty, energized battery charger enclosure, and an engine block or seacock simultaneously, he or she would complete the connection to the power source, and be shocked, if not electrocuted.

In the accompanying image the ground has been eliminated from this circuit using a commonly available adapter, one that’s intended to be used with a wall outlet (the tab is designed to be attached to the screw that retains the receptacle wall plate, providing a ground) and not in a stand-alone-fashion.

Every circuit that is designed to be grounded, this includes any appliance cord that has three prongs, must be grounded, it’s not an option.  Never, under any circumstances, eliminate or compromise the ground.

We’ve pulled the chainplates out of our 1982 Skye 51 for inspection (no idea whether they are original), but what, exactly, do we look for?  There is some surface rust—some pitting but not much.  I’ve read about X-rays and dye tests but with a moderate amount of research still can’t find out where to have those tests conducted, how much they would cost and whether that’s the best approach.

You are wise to preemptively pull these for inspection, far too many folks fail to do this and pay the price.  Chainplates live in a challenging environment, one that’s ripe for crevice corrosion and stress cracking.

I’m afraid I’ve never had a chain plate X-rayed, so I can offer no guidance on that front.  However, carrying out dye penetrant testing is common and relatively easy to do.  Begin by thoroughly cleaning the chain plates to ensure they are free of all bedding or staining.  You can use 3M ScotchBrite pads for this, or Emory Cloth if you need something more aggressive.  After cleaning, carefully inspect for pitting or cracking.  Use a magnifying glass under good lighting for this analysis.  If cracks are found, you need go no further, the plate must be replaced.  If chain plates pass the cleaning and visual inspection, you can then move on to a dye penetrant test.  Kits such as ‘Spotcheck’, are available on line from industrial suppliers such as McMaster Carr and Grainger.

The area where chainplates are most likely to come to grief is just below the deck level, where water is most likely to be retained.  Pay special attention to this location.  Upon replacement, be certain to bed thoroughly.  This article will provide additional insight into bedding prep.

While not a guarantee against failure, carrying out an inspection of this sort will provide additional peace of mine in the years to come.

I really enjoy your technical articles. We have a Flex-O-Fold prop on our Hylas 46, which has been working fine until recently, when it started making an intermittent loud grinding noise at cruising rpm. Initially the noise would stop on decreasing rpm but has become more constant, even at low rpm. No loss of performance and no vibration. We dove to look at the shaft and the propeller looks okay. The mechanic says the engine and transmission seem okay. Any advice would be appreciated (we are in Tahiti now).

It’s tough to diagnose a scenario such as this from afar.  Are you certain the noise is coming from the propeller and not some other part of the drive train?  Propeller shafts are notorious for transmitting and resonating noises from engines, transmissions, damper plates and propellers.  Did you run the engine in neutral to confirm the noise is only present underway?

Flex-O-Fold props are relatively straight forward, without much in the way of an internal mechanism other than gears.  Assuming you dove on it, did you check for excessive play in the blades to prop hub interface?

Grinding noises rarely originate from props, and thus I’d want to be absolutely sure there are no issues in the transmission and damper plate in particular.

Your recent reply on a post regarding replacing PSS bellows every six years brings up an issue I can’t get over.

Having owned boats for 30 years with conventional drip stuffing boxes, I cannot understand why anyone would buy the PSS system.  It is high maintenance and introduces a new high risk of sinking your boat if that bellows fails.

Having spoken with PSS representatives and my yard guy, they tell me they have never seen bellows fail. My current boat a Sabre 42 has a receipt in the records from the previous owner… an emergency haul out in the middle of the night for a failed bellows threatening to sink the boat.

Give me an old fashion stuffing box anytime.

The subject of dripless vs. conventional stuffing boxes is a weighty one to be sure, and the controversy surrounding it is only slightly less fraught than choosing the right anchor.

The 6 year replacement interval is the stuffing box manufacturer’s suggestion, not mine.  I have seen a handful of dripless stuffing box hose failures (not necessarily PSS’s), these are usually associated with water starvation, and then seizure of the stuffing box to the shaft, which then causes the normally stationary seal section to spin with the shaft.  If you didn’t see them, I recommend you read the two articles I wrote recently on conventional and dripless stuffing boxes, found here and here.  Interestingly, I’ve seen many more conventional stuffing box hoses fail, but that’s only by virtue of their volume, there are far more of them out there.

Personally, I too prefer a conventional stuffing box, but that’s almost certainly because I’ve disassembled, repaired, adjusted and repacked hundreds in my career, some under emergency conditions.  Your comfort level with conventional stuffing boxes is also likely a result of your familiarity with them.  I suspect many vessel owners, being unfamiliar with these, would rather have a dripless, and seemingly “maintenance-free” or low-maintenance alternative.  The prospect of a dry bilge is also enticing to many.  Of course no stuffing box is maintenance-free, and all should be inspected regularly.

Thank you for any advice.

The purpose of the remote expansion tank is to allow air to be purged from the cooling system.  Therefore, it should be T’d into the higher of the two hoses that are plumbed to the water heater’s heat exchanger, at the highest location in that hose, which presumably is where it is connected to the water heater.