I just bought an Ocean Alexander 42 Sedan with CAT 3208s in it.  They do not have air cleaner filters, just a metal box.  Two mechanics have told me that this is very common and that they do not need filters because the engines rooms have clean air.  Caterpillar’s web site does not have 3208 air filters.  What is the story or truth here?

As strange as it seems, and as unusual as it is today, Caterpillars of this model and era were not equipped with conventional pleated air filter elements as we know them.  They do utilize a perforated steel box that has a foam element, both can be seen in the image below.  Your mechanic is right to an extent, marine engine rooms aren’t very dusty, and as such Caterpillar deemed them unnecessary.  Today, that logic has evolved, you’d be hard pressed to find a marine diesel engine that is not equipped with an air filter. Contaminants such as fan belt dust or deteriorating acoustic insulation can be drawn onto an engine air intake, however, so the lack of a filter is somewhat of a liability, making it important for you to ensure the engine room air remains as free of suspended particulates as possible. 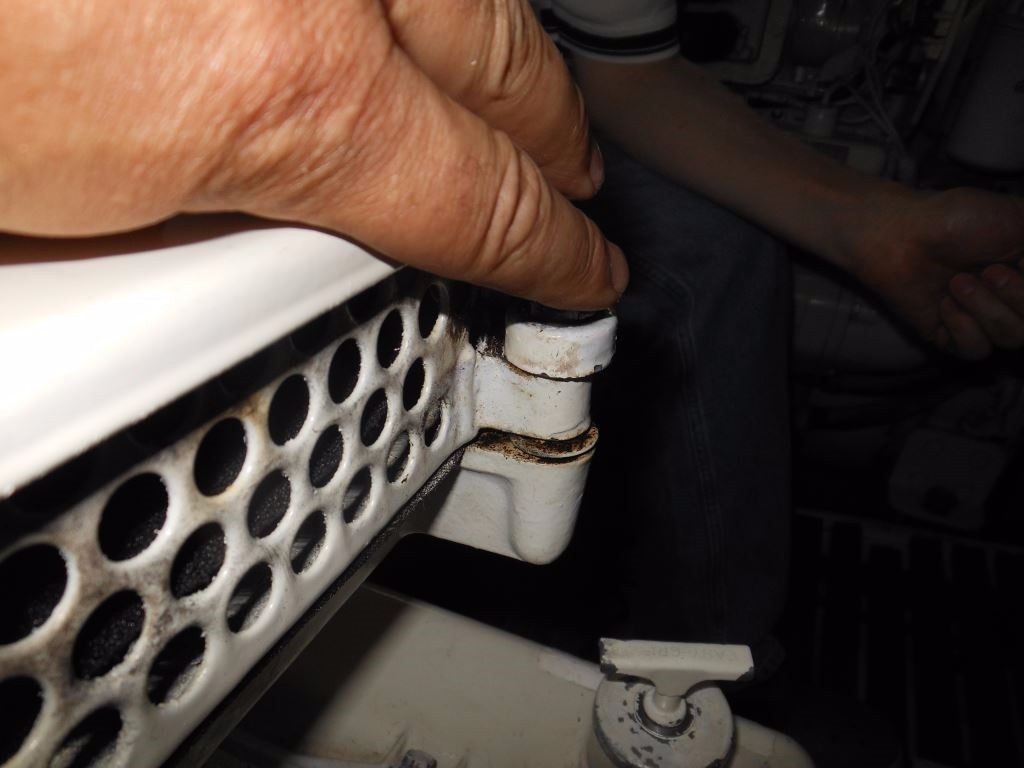 In general (I know each brand of paint is different), have you seen a huge difference in boats that have acid-etched and primed their bronze strainers, rudder brackets and struts compared to boats that just cleaned the bronze well and then put on bottom paint?

Not sure if it’s worth the time and expense of priming when we have to bottom paint every year to year and ahalf down here in the tropics anyway.

Most definitely, conventional anti-fouling paint simply will not adhere to most underwater metals, particularly where there is turbulence.  Areas that should be primed include hull strainers, struts, rudder logs, shafts and props (shafts and props are better served by a proprietary running gear product ).  Through hulls seem to retain paint better and thus don’t necessarily need the primer treatment, however, they do benefit from it in that it helps resist paint failure caused by alkaline production, which is caused by the vessel’s bonding system and anodes.  For any coating preparation is critical, metals should be cleaned until bright, and then profiled to provide the primer with “tooth” or slight roughness to which it can adhere.  Before coatings are applied surfaces should be thoroughly de-waxed using a solvent such a mineral spirits or 3M General Purpose Adhesive Remover.   I wrote a column on the subject of running gear anti-fouling, you might find it usefulhttp://www.proboat.com/2015/08/antifouling-tactics/.

The primer application is not required each and every time paint is applied, it should last for years, especially if you are using an ablative anti-fouling paint.  Most important of all, when using a primer, make certain the anti-fouling paint is from the same manufacturer (Interlux Micron Ultra and Interprotect 2000E for instance), and make certain the anti-foulant is applied within the primer’s chemical adhesion window.

As an offshore racer, I can go days without being able to engage the engine (and put a high load on it).  I know lots of idling isn’t good for the engine. Nonetheless, I need to run it to charge my batteries. How high RPM should I charge at to “help” my engine the most (I.e., put sufficient load on it)?

The speed at which you operate the engine has little bearing on the load per se, unless operating it at a higher rpm also increases the alternator output.  I suspect it will, however, if it’s a stock alternator it probably won’t make a significant change.  For the most part, few alternators are able to place enough load on an engine to drag it out of the chronic under loading zone.  A 70 amp alternator, assuming it’s producing 70 amps, will apply a load of roughly 1.3 hp to the engine, precious little as you can see.

This is a common problem for sail auxiliaries when used for charging alone.  While there is no immediate solution, running the engine up to roughly 80% of full load for 10 minutes out of every four hours will help to offset some of the detrimental side effects of this scenario.

I’ve just purchased a 1979 Mason 43′.  It has 300′ of 3/8 chain on it.  I’m having a hard time finding information on how to assess the life left in a chain and whether it should be replaced before departing on an extended (5 year) equatorial cruise.  Have you ever written any articles on this subject?

Thank you in advance for all you do for the boating community.

Assessing anchor rode is a task that’s too often overlooked, I’m glad it’s something you’ve considered before setting off.  I haven’t written an article specifically about chain rode, however, a chapter in my upcoming book will cover the subject under windlasses.  In short, if the chain shows evidence of more than light rust, it’s ready for replacement.  The rode should be laid out on a clean surface, preferably a dock rather than concrete (dragging it over concrete will wear off the zinc coating), and carefully inspected.  Look for heavy rust, and deformed or cracked links.  Additionally, look for the chain type, it should be stamped on each link, 3B, G4 or HT for instance.  This, along with the link diameter, will enable you to determine its safe working load and breaking strength.

Barring obvious defects, chain doesn’t wear out per se.  Having said that, you might consider end for ending it, evening out the loads and wear on the galvanizing.  Finally, when replacing it make sure the bitter end is attached to the boat via a cut away line, a line that can be easily cut if you need to jettison the rode in the event you are dragging onto a lee shore and are unable to retrieve it quickly enough. 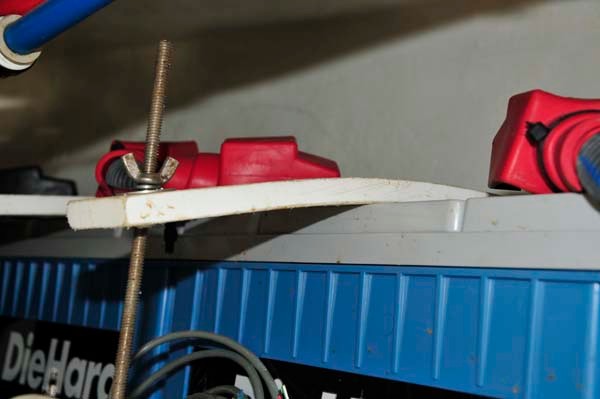 About fifteen years ago this material hit the marine industry like a tidal wave, and has since been embraced by boat owners and boat builders alike.  It’s tough, resilient, stain resistant, rot-proof and UV stable.  I’m referring to high density polyethylene, or HDPE; more commonly known by the trade name King StarBoard®.

There is an ever present quest within the industry to find the perfect construction material, one that embodies all of the above attributes and is relatively inexpensive and easy to work with, and once again HDPE meets this criterion.  Go to a boat show and look around and you’ll see HDPE being used seemingly everywhere, from drawers and cabinet doors to hatches and tables as well as in an anti-chafe role around windlasses and cleats.

So what’s not to like?  As versatile and rugged as HDPE may be, there’s one thing it’s not and that’s stiff.  Being a non-reinforced plastic (fiberglass is a good example of a reinforced plastic) it is flexible and when unsupported, and loaded, it deforms readily.  This is more a shortcoming of the installer rather than the material, as it’s being pressed into roles for which it is not suited.  Plainly put, it should not be used in applications that require significant rigidity.  In the accompanying image HDPE has been called upon to support batteries, and it’s deforming considerably.  Even if a shorter section was used, presenting less overhang, I would argue the material is not suited for this role.  Two other features embodied by HDPE make it less than ideal in certain applications.  One, it’s exceptionally dense, it’s heavy, and two, it’s slippery, especially when wet, which means it’s less than ideal in step or tread applications.

By all means use this pseudo-wonder material when it’s right for the job, but think carefully before using it in applications that require self-supporting rigidity.