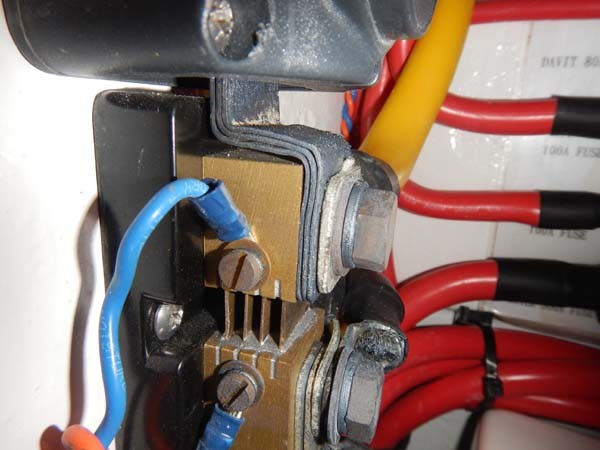 Bus bars (it’s not spelled ‘buss’, the likely confusion arises from the fuse manufacturer, “Bussmann”) play a critical role in marine electrical systems, particularly those that are called on to convey high current.  Cases of heat generation, caused by high resistance connections that are loose, undersized or corroded, are not uncommon.

High quality bus bars are made from solid, oxygen-free (removing oxygen improves conductivity), copper with a minimum purity of 99%, and of course the cross section, the equivalent of wire gauge, of the bus bar must be capable of safely conveying the expected current.

An added bonus would include tin-coating, which would reduce the likelihood of oxidation or corrosion, although fully assembled bus bars can be sprayed with a clear coat to achieve a similar effect.  Where high current is concerned it’s best to use copper rather than brass.  By comparison of conductivity, silver is most conductive, with copper a close second, while brass is a distant 7th and bronze 8th.   Other than for low current applications, it’s best to use pure copper.

In the example shown in the accompanying image, three sheets of copper flat stock have been “laminated” together, to achieve the requisite ampacity or current-carrying ability.  This is a very poor approach indeed, the copper is heavily oxidized, making it likely that the resistance (along with gaps) between each layer is increased. Additionally, if one or two of the sheets were to lose continuity, if they cracked for instance, then the current would have to pass through the remaining sheets, possibly overloading them.  Using two small wires, rather than one large wire, to complete a circuit is a good analogy, it’s an acceptable practice only if one of the wires can safely carry the full load.

This laminated bus bar should be replaced with one made from solid copper.

I found your site and after looking at your example inspection reports, I really admire your attention to details and understanding of ABYC (and common sense) guidelines.  I have a 2006 340 SunDancer and I have a couple of electrical connector questions.

I am relocating the AC circulation pump so that it is not mounted to the side of the main stringers where the bilge will collect water first.  I had a main bilge pump fail and it swamped the air-cooled AC pump so I am going to a March liquid cooled pump and moving it up while remaining well below the water line.  My question to you is how I should make the connection between the stranded wires from  the pump and the 120v circuit on the boat.  It’s my understanding that wire nuts are not acceptable for any connections as per ABYC so I’m wondering what I should use in the J-Box that is mounted on the transom?  They had but spliced and electrical taped the connections if I remember correctly.

Second question is about the bilge pumps themselves and how to best deal with the connections to the pumps.  I know the connections should be completely water tight and as high above the pump location as practical.  Do you recommend some sort of J-box that is waterproof and then use a terminal block for the pump and switch conductors?  I can’t find a single good example of how this should be done “right” online.

Thanks for your help in advance.

You are wise to be cautious where shore power is concerned, as it presents a very real risk of both electrocution and fire.   The ABYC standards regarding alternating current, i.e. shore/genset/inverter power, connections are very clear, they must be housed within an enclosure.  Relevant entries from section E-11 include the following (I’ve added the highlight)…

11.14.4.1.1 Junction boxes, cabinets, and other enclosures in which electrical connections are made shall be weatherproof, or installed in a protected location, to minimize the entrance or accumulation of moisture or water within the boxes, cabinets, or enclosures.

11.14.4.1.1.1 In wet locations, metallic boxes, cabinets, or enclosures shall be mounted to minimize the entrapment of moisture between the box, cabinet, or enclosure, and the adjacent structure. If air spacing is used to accomplish this, the minimum shall be 1/4 inch (7 mm).

11.14.4.1.1.2 Unused openings in boxes, cabinets, and weatherproof enclosures shall be closed.

11.14.4.1.2 All conductors shall be supported and/or clamped to relieve strain on connections.

11.14.4.3.1 All connections normally carrying current shall be made in enclosures to protect against shock hazards.

You are correct, use of wire nuts is prohibited.  Instead, I would recommend you use a terminal strip within the junction box, to which the wires can be attached using high quality, double crimp, nylon-insulated ring terminals, for more on those see this article.  Wires should enter the box from the bottom to prevent them acting as a water path or leader into the box, and make certain they are strain relieved so that when pulled on, they do not transmit tension to the connections.  If the area is damp, as it likely is, use a conductant pasted at the interface between the ring terminals and terminal strip (be careful not to create a conductant paste bridge between terminals).  The completed terminal strip should be coated with corrosion inhibitor.

As far as DC-powered bilge pumps are concerned, I wrote a detailed article on the subject a couple of years ago.  An excerpt follows.

A tinned-copper terminal strip with an insulating cover installed 4′ to 5′ (1.2m to 1.5m) above the bilge and then coated with corrosion inhibitor makes low-resistance connections secure yet accessible for inspection and testing. If this arrangement isn’t feasible, connections must be made as watertight as possible. Regardless of location, conductors should be coated with a conductive paste such as Thomas & Betts Kopr-Shield prior to installing crimp connectors. Connections should be made with high-quality heat-shrink tubing. When applying heat, be certain the resin completely encapsulates the wiring as it exits the tubing ends, and use caution when crimping such terminals, as overly aggressive dies can pierce heat-shrink insulation. Inspect the insulation carefully after heating, looking for areas that have been pierced. Secure all connections as far above bilge water as possible.

You can read the article in its entirety here

I found myself reading your piece about engine compartment fire extinguishers.  A few years ago, I put in a fire port in the engine bulkhead and got one of the expensive, liquid type engine room extinguishers. So I’m up to date on that item.

From reading your piece, I realize I have some more work to do.

I have a fan/blower which takes in air from the lazzaret and blows it onto the alternator to keep it cool.   I now realize it would be good to add a temperature switch (maybe from Klixon) that will cut off electricity to that blower if there is a fire in the engine compartment.  What would be a sensible temperature to have the blower switched off?  Maybe something like 180 degrees F?   Another temp switch can turn on a fire alarm.

Is it desirable to have an automatic shut down for the engine?  My boat was recently re-powered with a Yanmar 4JH5E.  The normal engine turnoff button is under a cockpit seat, in a space that is somewhat connected to the engine compartment.

In theory, it should be possible to have a temp switch turn off the engine, if someone can figure out the Yanmar wiring system so that the stop solenoid or fuel pump can be turned off.

You’ve posed some good questions.  I’m afraid the temperature switch controlling the blower would not be the most sensible approach, as there’s no guarantee that the heat of the fire would trigger it at the right time.  Incidentally, most automatic fixed fire extinguishers are set to discharge at 175° F.  That’s not to say you couldn’t install such a system, I just wouldn’t place absolute faith in it to turn off the ventilation system in the event of a fire, or before discharging a fire extinguisher.

By the same token, relying on a temperature switch to turn off the engine would be very risky for two reasons.  One, and once again, you couldn’t be completely certain the switch would turn off the engine after a fire started, and equally as important, if the switch malfunctioned it could turn off your engine at an inopportune moment, when you were docking or passing in front of another vessel.  It is for this reason that high coolant temperature and low oil pressure alarms do not automatically shut down propulsion engines.

I seem to have the odd boat question for which I can’t find answers in the usual places so I go to Steve D’Antonio.

My Gozzard 44 has a Westerbeke 82 with a coolant expansion tank which is kept 1/2 full. Recently, upon checking the level it was full to the brim. Drained it, then a few days later found it again full to the top.

I suspected the heat exchanger had a leak so did a coolant pressure test but it proved negative. Since the engine had 1500 hrs on it I replaced the HE believing the leak may occur only at temperature. But the expansion tank kept filling to the brim!

The only other place domestic water and coolant water comes in close contact is the water heater – in this case an 11 gallon Force 10 heater. Mechanics told me it was not possible for hot water to leak into the coolant in the heater.

Again, since the boat is 14 years old I decided to replace the heater with an identical Kuuma.  That seems to have solved the problem, the expansion tank has remained 1/2 full for months.

Since the pressure differential is 5 psi for the coolant versus 35 psi for the water system (when hooked up to shore water pressure could be 100 psi, although there is an inline pressure regulator). In theory it’s a possibility.

I imagine a little antifreeze mixed in your hot water shower wouldn’t be noticed but long term not very healthy. I emailed Kuuma with my story but surprisingly haven’t not heard back.

In short, the mechanic is mistaken, water heater heat exchangers can and do leak water into the cooling system.  Coolant is poisonous in strong enough concentrations, making this a very real concern.

The heat exchanger in the water heater can easily be pressure tested to confirm this is, or was, the source. If the old one is still around I’d do this if for no other reason than to satisfy my curiosity.  Some heat exchangers can be replaced, saving the hassle of replacing the entire water heater, and it can be inspected and tested for leaks.

As an aside, I’m no fan of aluminum water heaters, of which the Force 10 and Kuuma are two, they are more prone to corrosion-induced failures, including leaking heat exchangers.

The small fitting on my dripless shaft seals looks like it is plastic.

When I move the hose attached, it actually wobbles slightly. This does not seem right and looks like a potential leak if it were to break off or pop out. Do I need to pull the boat out of the water to replace this?

You don’t mention the brand of seal, however, at least one seal manufacturer I know of, at one time, used a nylon pipe to hose adapter.  They have since switched to metallic in order to meet inspected vessel fire resistance requirements.   If it’s this one, then yes, I agree, it’s flexible and can appear flimsy.  However, I’ve never seen one fail.  My recommendation would be to contact the seal manufacturer to confirm it is original equipment, and to determine if they believe it should be replaced or updated.