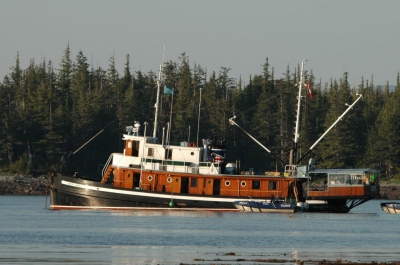 My Old Boat Has Good Legs

By Bob Lane
Photos by Bob Lane and Steve D’Antonio 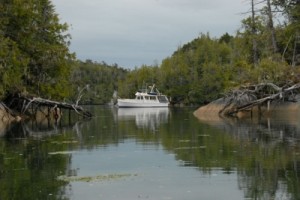 My old boat has good legs. Now, that’s an odd way to begin my first blog here, but I believe it is telling.  I recently completed a six-week, 929-mile summer cruise in my 32-year-old boat into central British Columbia without needing to buy exorbitantly costly Canadian fuel.

The gear that caused one memorable problem – and it was not threatening – was only a couple of weeks old.

The reliability of established systems and a pair of proven 1979 Ford Lehman diesel engines gave me confidence needed to take my boat, a 42-foot Grand Banks Europa named Quadra, along the edge of the Pacific Ocean and into remote Canadian waterways scores of miles away from marinas, technicians and coffee shops. Cell phones are turned off and dumped in a drawer because there is no service where I ventured. VHF radios may – under the best conditions – pick up broken transmission of weather forecasts.  You are alone, but not necessarily lonely.

My theme in this blog is that not only can old boats have good legs, but that given good care they also can be reliable, efficient and affordable cruising friends. I do not intend to dwell on mechanical issues in later blogs; I will share thoughts about some of the places this old friend and I have reached together, introduce some of the characters I have met in Northwest cruising and take on other topics of interest to me and, I hope, to other boaters. 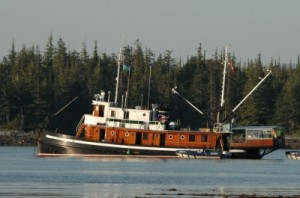 This former commericial tug, the Union Jack, has been repurposed by Westwind Tugboat Charters into a comfortable and capable charter fishing vessel. The hard-earned character of an old boat is difficult to match.

But back to my most recent adventure:

In running 135 hours, I added one quart of oil to each of the vintage diesels. That was all they needed during the run from my home in Anacortes north along the central coast of British Columbia and back again.

The Borg Warner Velvet Drive transmissions worked long and faithfully and all I did was check their temperature occasionally and pull the dip stick daily to say “hello, you look ok, goodbye.”

These engines have run about 6,500 hours in 32 years of Northwest cruising, with about 4,000 of those hours logged during the 21 years I have owned the boat. The first owner is a friend and I have most of the log kept by the second. I know those engines never have been opened for major repair. 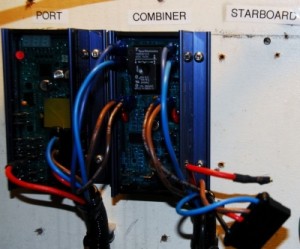 One of the alternators aboard Quadra appeared to have failed. A temporary fix was employed to allow the working alternator to charge the house bank.

I did have one irritating “issue” – the failure of a new Balmar system installed only a few weeks before Quadra left her home marina. New external regulators and a Dual Alternator Controller were intended to allow both 90 ampere engine-mounted alternators to charge simultaneously, and in a synchronized fashion, the  four L16 batteries in the house bank. Failure became evident when the radar shut down one gray day and presented a message warning of low voltage. I’m not sure when – or why – the system failed, but with the batteries feeding a heavy inverter load it didn’t take long for them to drop to the 11 volts I noted.

The Northern Lights 6kW generator picked up the charging load and the radar was happy again. But my crew and I were mystified, especially after searching through Balmar manuals for help. Finally, after some conversations with the installing technician (we still were in an area with cell service) I simply removed one black wire to disconnect the Balmar system. This put things back to square one, with the port engine feeding the house batteries and the starboard loafing along to keep the start batteries charged, although it may have been on a permanent holiday. (There is some suspicion that a flaw in the starboard alternator may have caused the Balmar system to crash.)

That served us adequately, but it meant the house batteries often wouldn’t be fully charged by the working alternator during a day’s run. That usually wasn’t a problem; if we turned in at night with the batteries at 85 per cent of charge, I was happy. Going for 100 per cent with the generator is a waste of time and fuel.

The cause of the failure remains unknown as I write this. After Quadra returned home, Balmar techs examined the Dual Alternator Controller and external regulators and found them to be okay. The electrician has been checking out wiring in the system and is testing the starboard alternator for a field short.

I found one other “problem” during a regular under-way check of the engine room – six drops of red coolant in the pan beneath the starboard engine. I found some seepage at a hose clamp and tightened it. The drip stopped, only to show up again the day before we reached home. I made permanent repairs later by replacing the pipe and hose that connect the expansion tank and the heat exchanger. The ends of pipe covered by hose showed signs of corrosion and the uneven surface apparently provided an escape route for coolant despite firm clamping.

Knowing that the boat was sound and systems were ok, my friend David Wilshin and I pulled out of Port McNeill, near the northwest tip of Vancouver Island, at 0700 for an early crossing of Queen Charlotte Strait. Although it is called a “strait” this really is the Pacific Ocean and it can be a dangerous jumble of seas, especially with a southerly opposing swells coming from the northwest. 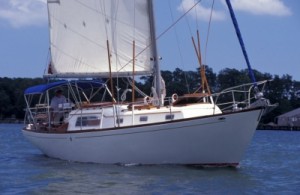 This lovingly restored Columbia has served her owner well for many years. Continual upgrades and maintenance have made for a comfortable and safe classic.

It was a long run, about 40 miles across the strait and along the mainland coast of British Columbia to our destination, the entry to Schooner Channel. We found calm water all the way and because it was early in the cruising season we saw no other pleasure craft out there in the ocean. Again, we were alone – but not lonely.

Quadra spent the night in tiny Skull Cove. It is not as ominous as the name suggests. It is shallow (only 11 feet under the keel at low water) and littered with huge rocks, but it was a safe, protected spot to anchor. We rested well, knowing Quadra was ready for the next day and a passage up winding, rock-littered and often shoal Schooner Channel and a transit of Nakwakto Rapids at slack water (at the end of a raging ebb current.) Once past that danger point we would begin our exploration of the evergreen wilderness of Seymour Inlet, an area first charted in 1993, and still infrequently visited by boaters.

Summing up: Because we took careful advantage of tidal currents, our  speed averaged 6.9 knots.  Some days the current allowed us to run at 8 or 9 knots with the engines turning RPMs for 6 or 7. The “free” ride and modest engine speed held fuel consumption to 3.38 gallons an hour; that total covers operation of the generator, including the unexpected hours during our charging crisis. (Years ago, when fuel was relatively cheap, I ran the engines at 1800rpm and fuel burn usually averaged about 4.8gph. I gave up about one knot of speed in cutting back to about 1600rpm.)

Another way to express fuel use is by counting miles per gallon used – and Quadra’s Fords delivered 2mpg.

With a fuel capacity of 600 gallons, I did not need to top off in British Columbia where diesel was selling for more than $5 a U.S. gallon. Tanks were full when we left in early June and still held about 140 gallons when Quadra turned into her marina space in mid-July. A few days later we motored to the fuel dock and took on 455 gallons at $3.60 each. 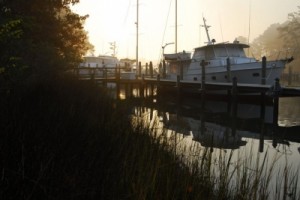 The Grand Banks Alaskan Jerry Land has been impeccably maintained, providing her owner with a seaworthy, safe and reliable cruiser.

Bob Lane is an Anacortes, Washington-based writer and photographer who has been a boater for nearly 40 years.

The son of a newspaper editor and a graduate of the University of Washington, he worked as a reporter and editor on four Washington newspapers, including 32 years covering political, governmental, transportation and environmental issues for The Seattle Times.

After accepting an early retirement offer from The Times, he worked about a year as a boat salesman on Lake Union in Seattle. He enjoyed the boats and the people but was an unsuccessful salesman. Offered a contract to write a book, he handed in the key to the broker’s office and went back to the keyboard.

In the fall of 1995, he connected with Bill and Laurene Parlatore, who published the first issue of PassageMaker Magazine early in 1996. He has written for the magazine on a free-lance basis since.

Bob has taken Quadra to Southeast Alaska four times and crewed aboard a friend’s boat on a fifth trip north. He also has gone cruising in the Sea of Cortez, in Florida’s Pine Island Sound and in Prince William Sound in Alaska (on charter boats or on craft owned by friends).

While in college he bought an old outboard motor, but never had a boat to put it on. His first boat was a 16-foot Poulsbo with a single-cylinder inboard engine bought in 1969 or 1970, the second a 20-foot Bayliner (great for water skiing). The first cruising boat was a 32-foot aft pilothouse wood boat designed by Bill Garden. It was followed by a 36-foot wood Grand Banks classic and then by Quadra, whose builder’s plate identifies it as the first fiberglass Europa model built by Grand Banks.