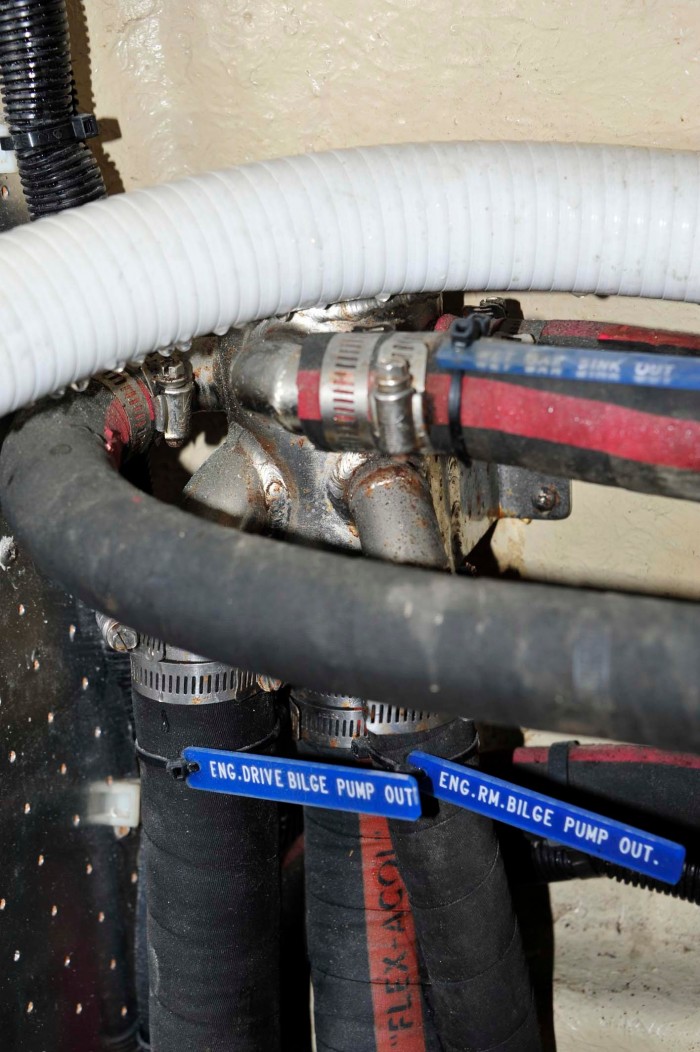 Boat builders are forever looking for ways to drill fewer holes in boats, sometimes to a fault.  Toward this end sea chests, a subject fraught with controversy, enable a single, albeit larger hole to supply water to multiple consumers, which in turn still require a hole in the vessel’s bottom, there simply centralized.  Thus, you have one more very large hole and the same number of smaller holes.  Is it worth it?  In some, but by no means all, cases it may be.  There’s one final wrinkle in the seachest formula, a centralized inlet means longer hose runs for many of the raw water consumers, which in turn increases the risk of failure, as well as increasing flow resistance.

The discharge counterpart to a seachest is an overboard manifold, a collector of sorts that combines the discharge of several water “producers”, bilge, air conditioning, gray water and sump pumps as well as gravity drains such as sinks and decks.  The idea, once again, is to minimize the number of holes in the hull, typically above the waterline in this case.  Some builders incorporate collectors in one or more locations throughout the vessel, while others install port and starboard pipes that start at the bow and discharge at the transom, into which various pumps and drains are plumbed.

On the face of it this approach seems like a good idea, however, like so many other boat building innovations, there’s always the law of unintended consequences.  One of the challenges with common discharge plumbing is the risk of common discharge back flooding.  If, for instance, the discharge outlet is blocked by a fender, floating debris, or a water fowl or a rodent nest, water can back up and exit one of the other devices, through a bilge pump for instance.  When I point this out to builders the common refrain is, “We’ve thought of that, each bilge pump hose is equipped with a check valve”, and while that is a means of dealing with this potential problem, it’s not one that’s ABYC compliant.  Guidelines established by ABYC specifically prohibit the use of check valves to prevent back-flooding in (bilge pump) installations that are plumbing into common discharge manifolds.  Anti-siphon valves can and should be used on most, if not all, bilge pump discharges, however, these will not prevent pressurized back flooding.

Ultimately, while there are exceptions, and while it does require additional holes in the boat, the preferred and most reliable means of discharging raw water, particularly for bilge and air-conditioning pumps, is through dedicated through hull fittings.