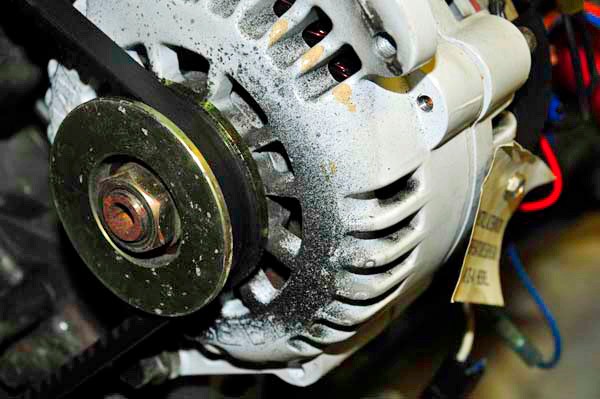 Is your Belt the Right Size

Photo and text by Steve D’Antonio

The belts used to turn various engine accessories- raw water pumps, circulator pumps, and alternators- represent a tried and true approach toward a transfer of energy.  The concept has been around for centuries; early water wheel-powered factories used a central drive roller, to which various belts were attached, each operating an independent machine.  Those belts were typically flat, more like today’s modern serpentine belts, however, the concept remains the same; energy is transported from a drive mechanism, via the belt, to the driven device.

In marine engine applications, provided the installation is designed and installed properly, V belts are long lasting and reliable.  Problems often arise after modifications, most commonly when an after-market alternator is installed.  It’s essential that all of the pulleys over which a belt turns be parallel and aligned with each other.  If one pulley’s centerline is not parallel with the others, the belt will ride on it unevenly, causing excessive wear and often shedding telltale belt dust.  Defects of this sort are commonly the result of poorly made alternator mounts, ones that either flex when loaded or those whose initial geometry is incorrect.  Sighting over the belt, such misalignment is often visible, with the belt hugging one side of a pulley’s groove, and entering it at an angle.

In the accompanying image, yet another potential defect is revealed, that of a belt that is mismatched to its pulley.  The top of the belt in this case can be seen well below the rim of the pulley, revealing the incorrect fit, forfeiting surface contact area between the belt and pulley groove walls.  Where belts are concerned, it’s all about contact, alignment and tension, if any are incorrect problems will arise.

The belt width should match that of the top of the inside of the pulley groove.  In fact, it’s permissible for the belt to stand proud of the pulley’s rim by up to 1/8”.  Furthermore, while there’s no way to determine how long it’s taken to accumulate, the dust also likely confirms that the belt is wearing incorrectly.

Check your V belts; confirm that the diameter, tension and alignment are all correct.  In an upcoming Photo Essay I’ll address serpentine belt issues.