I have a question about adjusting the valves on my engine.  If the engine is running smoothly and there is no smoke or slick with the exhaust is it OK to let it go?  The engine manufacturer recommends checking or carrying out adjustment at 500 hrs and I am up to 800. A rough survey of the boats here in the harbor seems to lean towards doing it only when symptoms arise (if they even have a clue what I am asking at all).  What’s you opinion?

Dick and Ginger, SDMC Captains’ Club members, cruising in the Med aboard Alchemy

This is a great question, I only wish, because it’s so important, that folks asked it more often.  I wouldn’t wait, do it at or near the recommended intervals.  Valve lash that’s out of adjustment may not offer clear symptoms other than reduced efficiency/fuel economy, and who can afford a reduction in fuel economy these days?  If the engine is hard starting or smoky or if fuel economy has inexplicably fallen then the lash is probably grossly out of adjustment and you’ve waited too long.  Also, check your engine tech manual to determine if the manufacturer recommends that the cylinder head fasteners be torqued.  This sometimes requires disassembly of the valve train, and you wouldn’t want to do that after you’d adjusted the valves.

Four rockers and valve springs are seen here (two full and two partial, above).  The silver shaft, on which the rockers pivot, the rocker shaft, often has to be removed in order to access all of the cylinder head bolts.

The feeler gauge being inserted into the gap between the valve stem and the rocker arm. 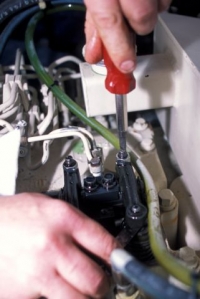 Adjustment is accomplished with a screwdriver.  The locking nut is then tightened while holding the adjusting screw in place.  Once that’s done, the feeler gauge must be reinserted into the gap to ensure no movement has occurred during tightening. 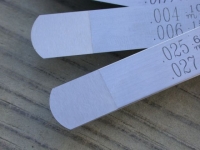 Using stepped “go-no-go” feeler gauges, makes life much easier, particularly for those who are not accustomed to carrying out this procedure.