I have a 26′ center console, 2 jet skis, a 13′ whaler and the 58.  Additionally I have two hoists that are battery powered with solar chargers.  Basically, I have a lot of batteries.  The problem has always been trying to determine when a battery should be replaced and I have been burned by not doing it soon enough and I have wasted money doing it too soon.  I thought I would get myself a battery load tester, the “toaster” type to help with the decision making.  I asked an engineer at the yard that built my 58 about it last fall andhe suggested a  digital electronic  tester.  I contacted a manufacturer and bought a unit.  This is my first season using it.  Do you believe that the technology is reliable?  In my first test of it the unit said “replace”.  Instead I recharged the battery and retested and it said “good”.  My understanding was that it shouldn’t do that.  Would you always charge before testing or do you think a low charged battery is a better test?  One of my old rules was that if it was dead in the spring, I tossed it. I have always used a 2-4 amp trickle charger.  Do you think this sort of product is worthwhile?

58 foot express cruiser and “others”

This is a great question.  I too have a variety of batteries, from boats, classic cars and motorcycles to yard power equipment and tractors, not to mention taking care of hundreds upon hundreds of boats during off season storage for the past 20 years.  I pride myself on getting the maximum life out of batteries, particularly those that are lightly used (life’s often hardest on these, the starting batteries that spend the majority of their lives in a dormant state).  I begin by purchasing only high quality batteries from reputable manufacturers.  If they are flooded, I check the electrolyte when they are new and then again about every quarter.

Before undertaking any battery testing or maintenance, be certain to wear safety goggles and gloves, batteries that are suffering from internal shorts or other malfunctions have been known to explode when load tested. And, batteries under charge emit explosive hydrogen gas, so be sure to carry out your work in a ventilated area.  If that’s aboard your boat, turn engine compartment ventilation fans on prior to beginning your work.

I test new batteries as soon as I get them using either a Midtronics Micro 400 impedance tester or a traditional resistive load tester known as a carbon pile (the big brother to the toaster).  These apply as much as 1000 amps of load to a battery (mine, from ARCO, applies only 500).  Auto parts stores and tool suppliers sell a smaller version, the one you mentioned,  that usually applies about 100 amps, these are known within the industry as, “toasters” because of their wire heating elements that glow red when used.  When possible, batteries should be tested at roughly one half of their Cold Cranking Amp (CCA) rating, with the battery about 75% charged, using this resistive test.  Carrying out this initial test establishes a base line for the battery’s cold cranking amp performance (CCA is defined as the amperage a battery supplies for 30 seconds at 0°F).  Don’t confuse it with MCA, or Marine Cranking Amps, this is the same test, however, it’s measured at 32°F and always yields a number higher than the CCA standard.  I write this number on the battery so when I check again at a later date I know if the capacity has diminished and if so how much.

Another method of testing battery condition is measuring its resting voltage, resting being defined as no charge and no load for 24 hrs.  A fully charged flooded battery is 12.6 volts, AGM or gel about 12.8.  Interestingly, only about six tenths of a volt differentiates a fully charged battery from one that is effectively dead.  Essentially, 12.0 is dead.

As far as keeping flooded batteries float charged, for over a decade I’ve used, with success, Guest Model 2602 Battery Pal for batteries up to Group 31 size and a Guest Model 2603 Battery Pal Magnum for larger batteries, 4D and 8D sizes.  These float chargers will keep a battery, “maintained” for years, literally.  Water should be checked every quarter, but rarely needs topping up before 6 months or a year.

For AGM or gels, get a little more sophisticated with a, “smarter” float charger such as the one you mentioned, the Pulsetech Extreme (whether they can resurrect a seriously sulfated battery is remains somewhat open to debate) or a SeaVolt Battery Maintainer (I use one of these on my home 12 kW gen battery, which is a Northstar AGM).

Finally, do the impedance type battery testers work?  My experience with them has been mixed.  They seem to be much better at accurately determining battery condition for starting rather than deep cycle batteries.  On several occasions the impedance tester has condemned a battery that then easily passed a 500 amp resistive load test while maintaining a healthy 10.5 volts (that’s my load test threshold, the voltage a battery should hold while it’s cranking or being loaded tested, although some testers indicate 9.5 is acceptable). The newest crop of impedance testers, such as Midtronics’s EXP-1000, is reportedly much more reliable when testing deep cycle batteries.  I haven’t used one so I can’t comment from experience, although a colleague indicates they are substantially improved over the Micro series.  For the time being, I’ll use the toaster or carbon pile resistive testers in order to check suspicious results where starting and deep cycle/house batteries are concerned. 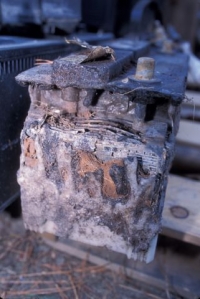 Attempting to charge or load test a battery that’s internally shorted or otherwise damaged could be dangerous.  This battery was charged during or after it had been frozen, which caused the casing to melt.

Many batteries die premature deaths because of improper charging protocols. 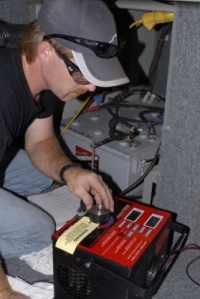 Carbon pile load testers, like the one shown here, place a heavy load on the battery in order to simulate high ampere consumer scenarios such as starting or inverter use.  Safety goggles should be worn when ever working with batteries, regardless of whether they are flooded, AGM or gel.

Although it will not test a battery’s ability to deliver amperes, a high quality multimeter, such as the one shown here, will enable you to determine a battery’s state of charge provided it’s been, “rested”.  Based onthe voltage of 12.35, this AGM battery is more than 50% depleted. 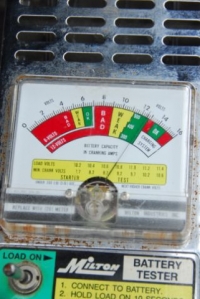 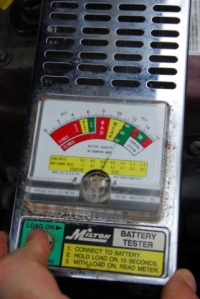 A resistive load tester such as the one shown here, sometimes referred to as a, “toaster” can be effectively used to determine the condition of many smaller starting batteries, however, its accuracy for large, deep cycle batteries is less certain.  At left is the battery’s voltage without a load present, while on the right the load has been applied and the battery is carrying it without difficulty.

Be certain, when purchasing a battery, you understand the difference between CCA (Cold Cranking Amps) and MCA (Marine Cranking Amps).

Digital, electronic battery testers are gaining popularity and their performance has improved since they were first introduced, however, they may on occasion still be, “fooled” by deep cycle batteries.