Steve:
I am doing a major refit of a 1986 Trawler. I’ve done some of the big stuff, such as a new electrical panel, all in the name of better electrical safety. Now, I’m looking at other parts of the electrical system.
I’ve noticed that my boat has GFCI receptacles in some but not all locations, the galley and head for instance are equipped with them but the saloon and V berth are not.I realize the importance of having these in homes and boats to prevent electrocution, however, where should they be installed and can one GFCI receptacle protect several outlets?
Finally I’ve heard talk around my boat yard about something called, I think, an equipment leakage breaker, which I believe is some sort of safer circuit breaker.How do I know if my boat has one of these and if it doesn’t should I have one installed?I’m concerned about the safety of those aboard my vessel.
Thanks,
Larry Hall
SDMC Captains’ Club member
Larry:
Thanks for posing these important safety questions.The technical standards set forth by the American Boat and Yacht Council (ABYC) call for the installation of GFCI (ground fault circuit interrupter) receptacles in specific locations, the head, the galley, in machinery spaces, which include engine rooms and lazarettes, and on deck.Indeed, one GFCI receptacle may offer fault protection for several ordinary receptacles that are “downstream”.You can test this by tripping the GFCI using the TEST button and then determining if any others receptacles also go dead.GFCI’s used aboard boats must be Type A, UL 943 and 498 compliant, which trip at nominal 5 milliamps. I recently carried out a pre-purchase inspection aboard a new Grand Banks 47.Its builder included fault protection for all receptacles by wiring them through GFCI circuit breakers located under the companionway steps.This is an excellent idea and one with which I’m in full agreement, for the negligible expense involved all receptacles could and should be protected.

The humble and inexpensive yet ubiquitous GFCI receptacle is a veritable necessity aboard every boat.  It's responsible for preventing untold injuries and saving countless lives both ashore and afloat.

These centrally located GFCI controls protect all of the receptacles aboard this new Grand Banks.  This is an excellent approach toward GFCI protection.

It's important to note that all receptacles, regardless of whether they are GFCI or not, must be installed within enclosures.  Although this example is extreme, it's not uncommon to find even new boats where the exposed rear portion of a receptacle protrudes into a locker or other accessible space.  Once again, every receptacle must be installed in a dedicated, purpose made box.

The answer to the question regarding the equipment leakage breaker is somewhat more complex and had you posed it a month ago my response may have been different.The latest edition, mine arrived just a week ago, of the ABYC’s “Standards and Technical Information Reports for Small Craft”, the book that contains the guidelines followed by thousands of boat builders and repair yards around the world, includes a new section calling for the use of these devices.
While there are a few terms for this type of protection device, they are commonly known as Equipment Leakage Circuit Interrupter or (ELCI) or Residual Current Device (RCD).

Wiring faults such as these can lead to equipment damage, short circuits or failure as well as injury to the crew.  RCDs answer the call where equipment protection is concerned, however, although not specifically designed for it they may also prevent electrocutions.
Regardless of the name, the function remains the same, these devices, they are circuit breakers, behave very much like a GFCI receptacle in that they sense current supply and return, and if an imbalance occurs, if the current is returning through some path other than the breaker, i.e. through a faulty piece of equipment, or through a person but more on that in a moment, and thence through the vessel’s safety grounding system, they trip or open the circuit, thereby protecting the equipment.  Technically, these devices are designed to protect equipment and wiring rather than people. 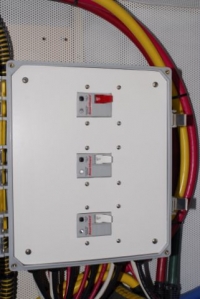 The RCD at he upper left is providing whole boat ground fault protection for this 30 amp, 120 volt shore power service.  The Series of RCDs on the lower right are designed to afford ground fault protection for this vessel’s 50 amp, 240 volt shore power service as well as the generator and inverter.  Thorough protection indeed.
Their trip threshold can be selected by the installer (it’s not adjustable, although the RCD can be ordered with a variety of ratings), ranging from 7 to 100 milliamps thus, they cannot be officially considered as people protectors.  However, given the choice, I would rather be shocked by a circuit supplied by an RCD rather than an ordinary breaker.  Again, officially these are considered equipment rather than people protection devices.
RCDs are required on most boats now built or destined for the European Union (and, now, if they are to comply with the latest ABYC Standards) and many European homes, businesses, wharfs and marinas are also equipped with this intelligent circuit breaker.  They are available in a range of amperages and voltages, including all of the most common ones used on today’s cruising vessels.  Many boat yards and builders are now making these devices standard for all new construction as well as electrical refit and repair projects.It just makes good sense.

Using a sensitive leakage test device, this vessel’s shore power cord is telling a potentially dangerous story.  Remember, the threshold for human injury is 5 milliamps, that’s 5 one thousandths of an amp.  This vessel’s shore power system is registering over one full amp of current returning through the water in which the vessel is floating.  It’s likely that, if it was present, an RCD would trip as soon as this fault manifested itself, thereby protecting the vessel’s equipment, and possibly crew and swimmers.

Inexpensive household receptacle testers such as this one can be useful, you can and should use one aboard your boat to perform routine tests of all receptacles a few times a year.  They do, however, have limitations, for instance, they often cannot identify a series of faults and they will not alert you to the quality of a ground or the reversal of the ground and the neutral conductors.  In short, while valuable, they have their limitations.
The primary argument against using RCDs aboard small craft is that they would be prone to nuisance tripping.  To be fair, opponents have a point, albeit a qualified one.  If, for instance, you tried to plug your entire boat into an ordinary GFCI receptacle, putting aside the load issues for a moment, chances are it would trip; the reason being that the cumulative “faults” within an entire vessel’s electrical system will often exceed the GFCI’s 5 milliamp rating.   All it takes is a little damp insulation to exceed this extremely conservative people protection threshold.  However, the ABYC guidelines recommend a trip threshold of 30 milliamps with a delay of 100 milliseconds.  Once again, this is technically not designed for electrocution protection, which is why it can be higher than that of an ordinary GFCI receptacle.  At 30 milliamps there are no “nuisance trips”, any trip is a real threat to the vessel’s equipment and crew and must, therefore be investigated and corrected. 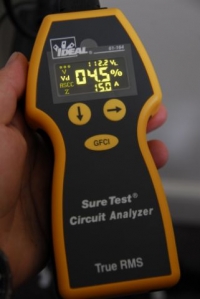 A tool such as the one shown here is capable of performing a multitude of tests on shore power installations, including proper GFCI operation, ground quality and identifying compound faults.  They are not inexpensive, however, more and more boat yards are using tools like this to perform routine checks on customers’ boats.  I use one routinely during pre-purchase inspections and in fault analysis projects.
I’ve installed 30 milliamp RCDs aboard vessels (I’ve used those manufactured by Carling Technologies, although there are others) whose electrical systems were sound and they’ve experienced no nuisance tripping.  It’s unlikely that your vessel is equipped with an RCD unless it was recently built in Europe or if it was retrofitted within the last two or three years. 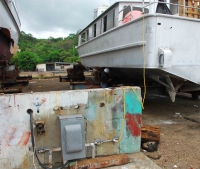 The shore power power distribution pedestal on the upper left that I recently came across while on a consulting project in Europe is equipped with integral RCDs, affording protection for all the vessels that are plugged in to its receptacles.  Conversely, the one on the lower right, encountered in a shipyard while on another overseas project, offers no such protection.
RCDs are available in a variety of values and delay settings, there’s one available for virtually every cruising vessel application.They would add safety and value to any new vessel’s electrical system and they may be retrofitted in existing systems as a replacement or in addition to the main shore power, generator and inverter breakers.  The bottom line is RCDs and GFCIs are very much worth having.