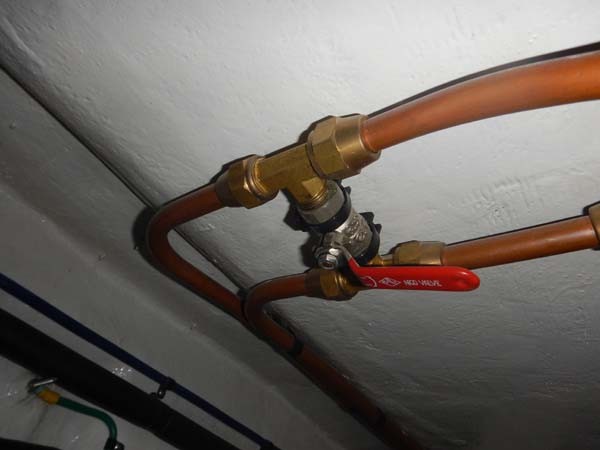 Hydraulic steering is ubiquitous, today it’s found aboard everything from center console run abouts to the largest mega-yachts, and with good reason, it’s rugged, versatile and reliable.

Each helm station is a pump.  Following Pascal’s Law, which states, “Pressure exerted anywhere in a confined incompressible fluid is transmitted equally in all directions throughout the fluid such that the pressure variations (initial differences) remain the same”,  when the wheel is turned, fluid is pumped, which acts on the steering ram(s), which in turn move the rudder.  Among other things, hydraulics afford users a host of advantages, including and especially the ability to easily transport power over long distances, and around sharp turns, as well as providing a mechanical advantage based on the amount of fluid pumped with each revolution of the wheel; more revolutions, with less fluid pumped, equals less effort.

While the concept is simple enough, the average 40-foot vessel’s hydraulic steering system is made of a dozen components, from helm pumps and rams to plumbing and check valves, and several hundred parts if all the individual parts, check balls, seals, gaskets, spool valves, shafts, rams etc. are taken into account.

While most systems on vessels under 60 feet are manual steering, they operate at a surprisingly high relief pressure, the highest pressure the system will experience before a relief valve opens; typically, 1,000 psi.  This means every plumbing component in the system must be rated to operate at this pressure; it’s a rule that often violated.

The accompanying image shows a hydraulic steering system manual steering ‘cross-over valve’.  When opened, it enables a user to attach a manual tiller to the rudder, and move it port and starboard, pushing fluid in and out of the hydraulic ram, which itself acts as a rudder stop and damper.  It’s an essential component of most hydraulic steering systems.  This one, however, one flaw; it’s made from nickel-plated brass, which is rated at just 600- psi, 400-psi under the system’s relief pressure.  In order to meet the 1,000-psi requirement, valves must be made from steel or stainless steel.

I enjoyed your article on sulfation Sulfation; Too many batteries die an unnecessarily early death from this phenomenon

A note to your readers might be that those with inverter/charges that are either old and do not have a “lock out” feature or that the lock out feature is not activated, might inadvertently run their batteries dead and seriously diminish their life span. This can be accomplished easily if there is a space heater or dehumidifier or some other AC demand and the shore power goes out either by someone pulling your plug (not as uncommon as one might expect) or power outage. The inverter then seamlessly picks up the slack and starts to run the AC demand from your battery bank. This is so seamless that it can occur with you on board and not become apparent until your batteries have already been depleted, taking a good chunk of your battery’s life with it. With the lock out feature, the inverter is not activated unless actively brought on line.

Good point, the default for most of today’s inverters is the inverter inverts automatically when no shore power is available, but as you say this can be changed/overridden.

The quandary is, if you are off the boat do you want the inverter to carry critical loads like refrigeration for dockside power outages?  Some say yes, others no.

Which brings up the next question, should you have a remote vessel monitoring system like Siren or Maretron?   For most applications I’d say yes,  it will alert you to a loss of shore power, low battery voltage and a host of other parameters of the user’s choice.  It’s pretty cheap insurance for unattended vessels provided you have cell or solid Wi-Fi coverage.

Love your tips and articles.  Could you recommend a remote bilge pump mfg., I believe you’ve mentioned one before in the e-magazine.

There was a time where the only way to accomplish this was by using a self-priming, remotely operate diaphragm pump, typically the ubiquitous reciprocating, sometimes bet-driven Par/ITT Jabsco model.  These pumps and all like them require a strainer as they are very sensitive to bilge debris the diaphragms foul easily (I encountered one that stopped working because of a fingernail clipping).  Now, however, there are alternatives.  I have good results with the Whale products, specifically the Super Sub models.  These are rugged, well made and they are capable of removing water down to a very low level, while retaining the reliability and simplicity of a submersible pump.  Also, the next generation of remotely mounted self-priming pumps, they no longer use belts, such as the Whale Gulper, present another option.  These multi-chamber diaphragm pumps still require a strainer.

My 1972 Volvo Penta MD21A issues clouds of white smoke when I throttle up to 2000 or more. At lower rpms the exhaust has little or no visible smoke and engine purrs along. Engine temperature is normal. Oil pressure is normal.

Fuel injectors were serviced to solve the problem, to no avail. So far I cannot check the engine compression for lack here of adapters for this engine.

I would appreciate your thoughts.

Paraphrasing from an article I wrote on the subject a few years ago, white smoke is one of the most difficult symptoms to diagnose because a number of factors can point to two general causes: overcooling, whereby the cylinder head and combustion chambers operate at a temperature that’s too low for proper combustion; and piston-ring blowby, which indicates low compression and poor combustion.

White smoke represents atomized fuel, very small droplets of fuel that form a fog of sorts. It’s common, and quite normal, to see this when a cold engine is started and until it warms up. If, however, a preheat device such as glow plugs or an air-intake heater are malfunctioning, the production of white smoke may be excessive and longer lasting. In extreme cases, the engine may be difficult or impossible to start.

Fuel of poor quality, particularly fuel that’s off spec or not properly formulated as Number 2 diesel, will burn poorly, which in turn may produce white smoke. Adding a fuel cetane booster may temporarily alleviate-and identify-this problem.

Other causes of white smoke are poorly adjusted valves or worn valve seats, a partially activated decompression lever, a blown head gasket, or a cracked cylinder head or cylinder liner. A mechanic with the proper tools can narrow down the suspects.

White smoke can also indicate overheating, but the “smoke” is actually steam that’s produced in the exhaust system rather than as a result of an overheating engine. This may occur, for instance, because of restrictions in the injected elbow. To test for this, measure temperature of the “wet” portion of the exhaust hose; between the injection elbow and the muffler, when the symptom is occurring, it should be 160°F or less.

Thank you very much for the valuable information concerning seacock installation.  I am the original owner / operator of a 2008 Hampton 600 and extremely focused on preventative maintenance.  Is there any guidelines when through hull fittings should be replaced based on age and not visible signs of corrosion, fatigue or incorrect installation? Hampton has done a good job of bonding including all of the through hull fittings.  BLAZE is now in its 9th year with almost 1000 hours on the main engines and 1575 hours on the generator. I am facing some costly maintenance (1000 hr. engine inspection, bottom job, etc.) items which can’t be put off and wanted to know if I should include replacing all of my through-hull fittings at this time.  I live in New Orleans and keep BLAZE in Fort Lauderdale where the work will be performed. Thank you again for all you do to keep our boats afloat and running efficiently.

There is no standard replacement interval for seacocks per se.  Their longevity varies dramatically with both brand/type and conditions.  I’ve encountered 50 year-old seacocks that remained in good condition (they were the Perko re-buildable variety, pretty rare these days), and others that seized or failed all together after just a couple of years, or less.

This article and this photo essay offer specific guidelines that seacocks should meet, UL, ABYC and CE.  You can compare yours to see if they measure up.

Generally speaking, however, in the absence of any signs of corrosion or failure, or seizure, I wouldn’t consider preemptive replacement of seacocks to be necessary.  Seacocks should be exercised regularly, at least quarterly if not more often, that’s the best way to both make certain they remain free, and to identify problems, leaks, corrosion etc., before they become critical.  Make certain your bonding system is in good shape, and all connections are clean and tight.  While the vessel is hauled out, you could check continuity between seacocks, and other underwater metals, struts, rudders etc., and your sacrificial anodes.  The resistance between any protected metal and an anode should not exceed one ohm, a pretty low threshold.  This article will give you an understanding of how bonding systems work, and how they can protect underwater metals such as seacocks from corrosion.