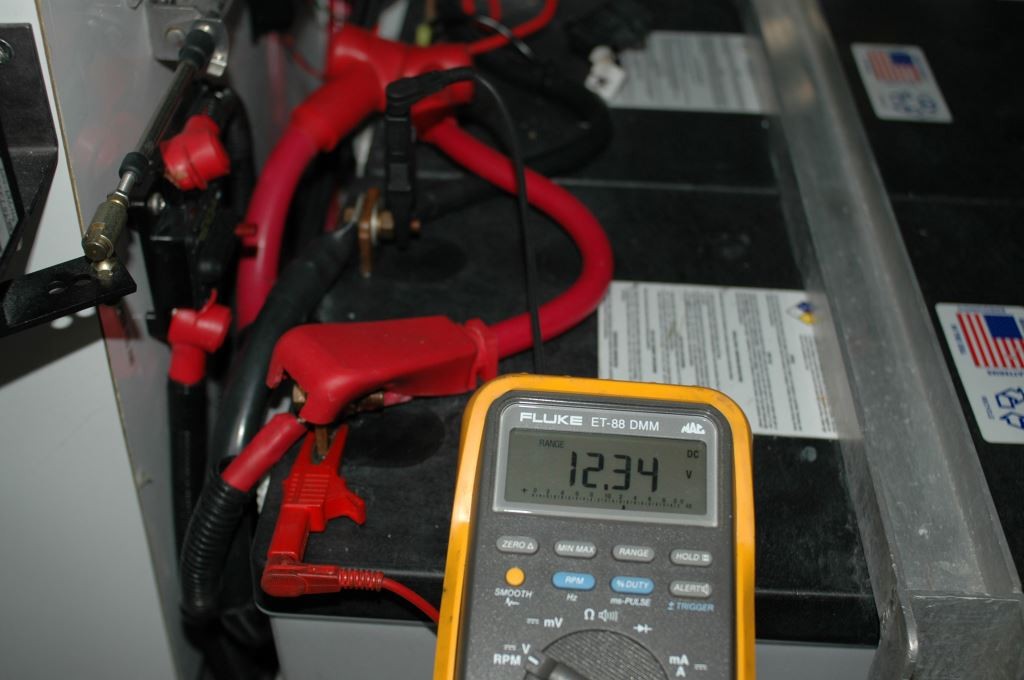 Advice for Boat Buyers in a Seller’s Market

Can one person represent, and protect the interests of, two parties in the same financial transaction? It’s a question I’ve asked myself on a number of occasions.  This approach is common in the world of marine brokerage, boat brokers routinely represent both parties, and are allowed to do so by the bylaws of most, if not all, brokerage organizations, and state laws where applicable.

It should be understood, if you are the buyer, and you do not have your own broker, a buyer’s broker, then the selling broker handles the transaction, and he or she will typically agree to “represent” you as well.  Brokers who work on commission, and most do, derive their income based on a percentage of the sale price of a vessel, for which they should be working and providing value to their client(s).  The seller is paying the commission, it’s deducted from the sale price of the boat, so is it reasonable to think the buyer would be receiving representation, when he or she pays nothing for it?  Thus, as a buyer, you must ask yourself, ‘will that broker represent my best interests, will he or she work diligently toward helping me purchase the vessel I want at a fair, and the lowest possible, price?’  I’d feel better if brokers said, “I can carry out the transaction for…” rather than “I can represent…both buyer and seller”.

What’s a buyer to do?  In short, keep in mind a few important points.  A selling broker is probably not going to be your advocate, so you have to be your advocate.  If you’ve bought boats before (in the same price range as you are preparing to buy now), you may know the ropes well enough to go it alone.  If you have a buyer’s broker, then he or she should be assiduously guarding your best interests, as an advocate not just a transaction facilitator.  Some, however, would rather sell you a boat that they have listed and thus not share a commission, if so, they are probably not your buyer’s broker.  Reputation goes a long way on this front, choose carefully, ask for references, and be mindful of potential conflicts of interest.  One of my best and most experienced clients, he’s bought and sold many boats, likes to say, “You have to be a fool to use a single broker…no matter how nice and professional he/she may be.”

Finally, remain involved in the process rather than handing over the responsibility to someone else, do your due diligence, ideally you should be involved in selecting your hull and engine surveyor, rather than taking recommendations from selling brokers, as that does, in my opinion, represent a potential conflict of interest (brokerage organizations typically allow brokers to recommend surveyors provided they recommend at last three).  Think about how you might feel if that surveyor, recommended by a selling broker, misses something important.

Good brokers always keep two things in mind; one, maintaining their reputation for ethics and transparency is paramount.  Two; they may have an opportunity to do business with you again, and the impression they leave will determine whether or not that’s likely to occur.

Sulfation; Too many batteries die an unnecessarily early death from this phenomenon 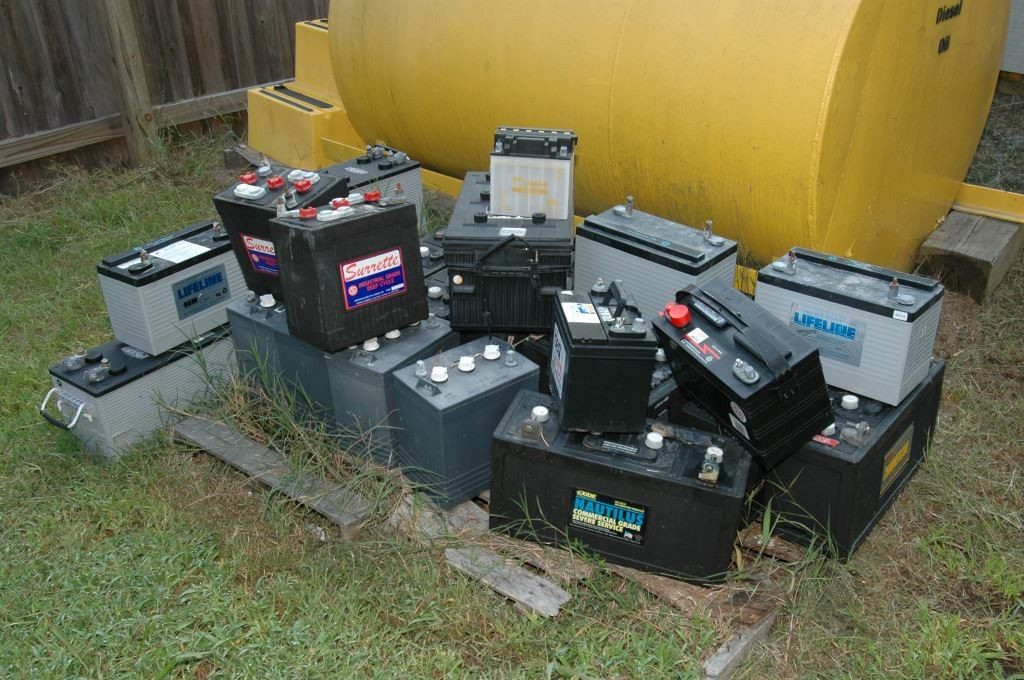 Many batteries die an unnecessary, premature death, the victims of undercharging and sulfation.

It’s a scenario I faced many times while managing a boat yard; a vessel’s batteries go dead for any number of reasons, a circuit breaker trips, a shore cord is unplugged, an owner leaves the vessel and inadvertently fails to engage the charger.  Upon returning to the vessel the owner is chagrined to find no light, no DC and perhaps no AC power; it’s disconcerting at best.  Adding insult to injury, many inverters will not charge a battery bank that’s dropped beyond a given threshold voltage, which means there’s no way to charge the batteries unless the vessel is equipped with another, stand-alone charger; these typically will charge a dead battery bank, or by starting the main engine.

What happens next can be very telling.  Depending upon how long the batteries were left in a depleted state, they may have undergone a process known as sulfation, wherein crystals form on the battery’s plates.  Sulfation is a phenomenon that occurs when lead acid batteries are left in a discharged state, with each crystal diminishing the battery’s capacity. 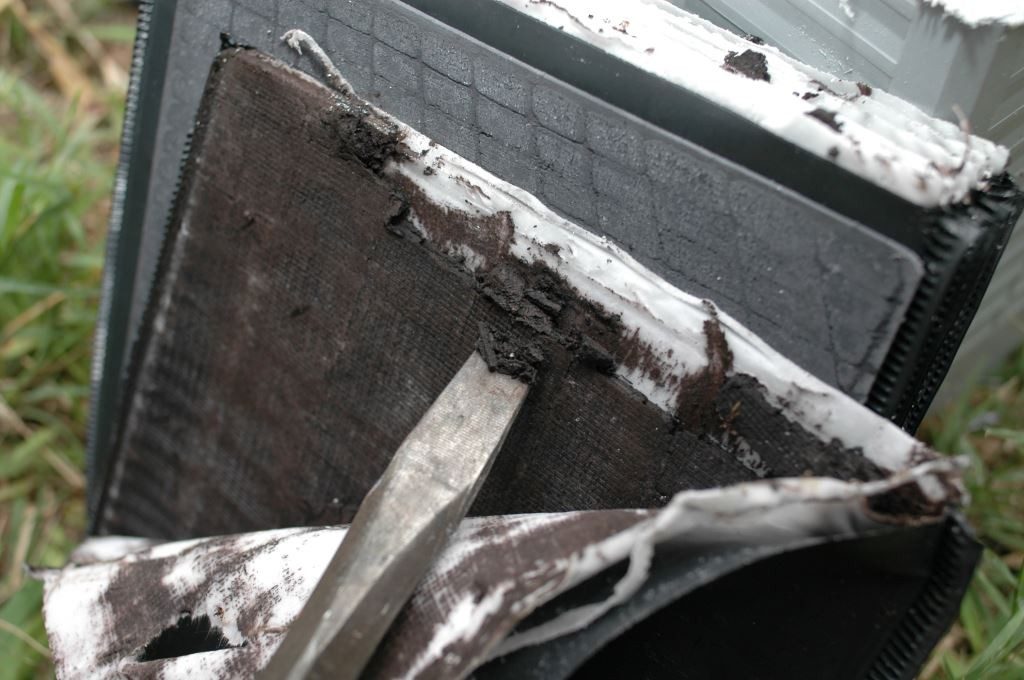 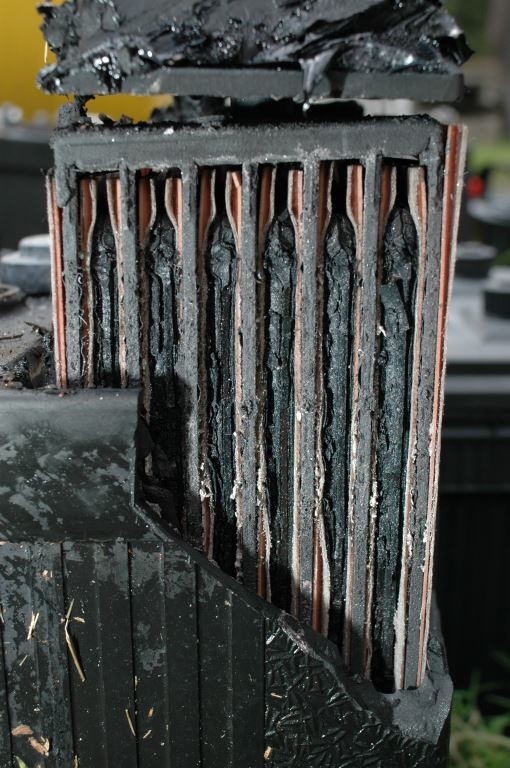 Sulfation occurs when battery plates are corrupted by inert crystals, every one of which displaces active material, thereby diminishing a battery’s capacity.

Sulfation can also occur when batteries are chronically undercharged, which occurs frequently aboard cruising vessels with large banks and undersized charging systems, or where charging systems simply aren’t, or can’t practically be, run long enough to return the bank to 100% state of charge. When sulfation occurs, it effectively shrinks the size of the battery bank, with each crystal displacing active plate surface area.  When a charge is applied to a sulfated bank, it often appears to behave normally, at least at first glance, it charges rapidly, and that’s when the head scratching often starts. 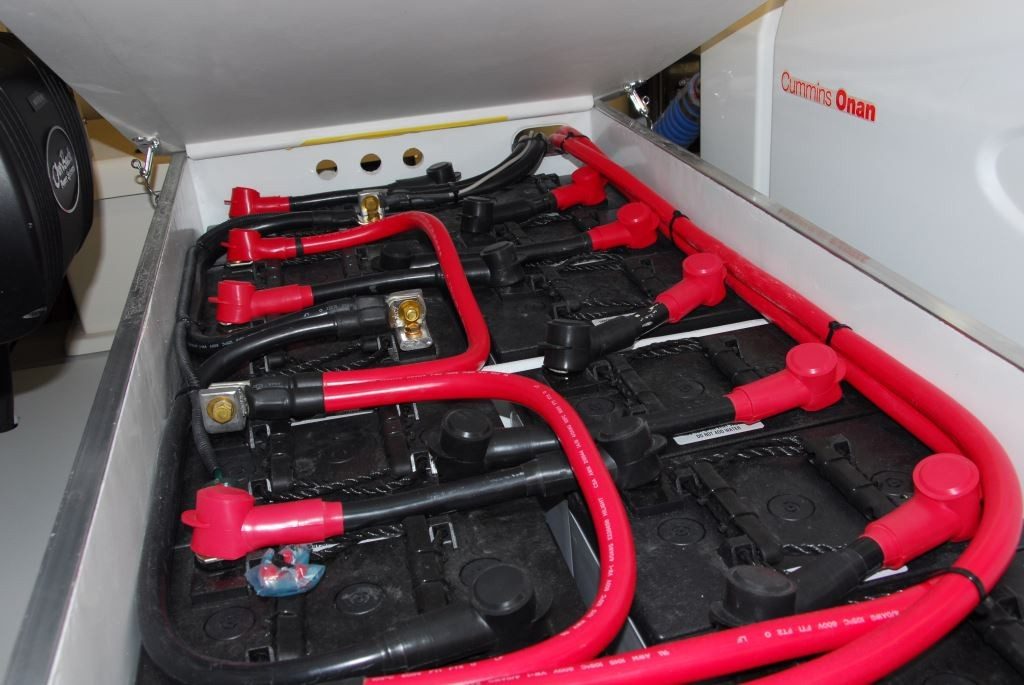 Large battery banks are prone to sulfation because they are frequently chronically undercharged.

In one sulfation case I dealt with, aboard a vessel that was equipped with a one year old, 700 amp-hour, 12 volt Absorbed Glass Matt (AGM) battery bank, with charge sources that include a 130 amp inverter/charger, a small 30 amp back-up charger, and a 150 amp externally regulated alternator, all the sulfation clues were present.  The owner is a live aboard and is away from the dock, and shore power, roughly 75% of the time, which means batteries are cycled daily during this time.  So far so good, no red flags appeared until she told me, almost in passing, the boat had recently been in a yard for a bottom job, and during that time her shore power cord had been inadvertently unplugged while she was away from the boat.  When she returned the voltage on the house bank was just 5 volts.  She activated the back-up charger, as the inverter would not come on line with voltage being so low, and the batteries recharged quickly, almost too quickly she remarked.  The boat was launched and remained dockside for a week before she once again got underway, and that’s when the low reserve capacity problem manifested itself, the bank was being depleted in a fraction of the time for which it normally supplied power. 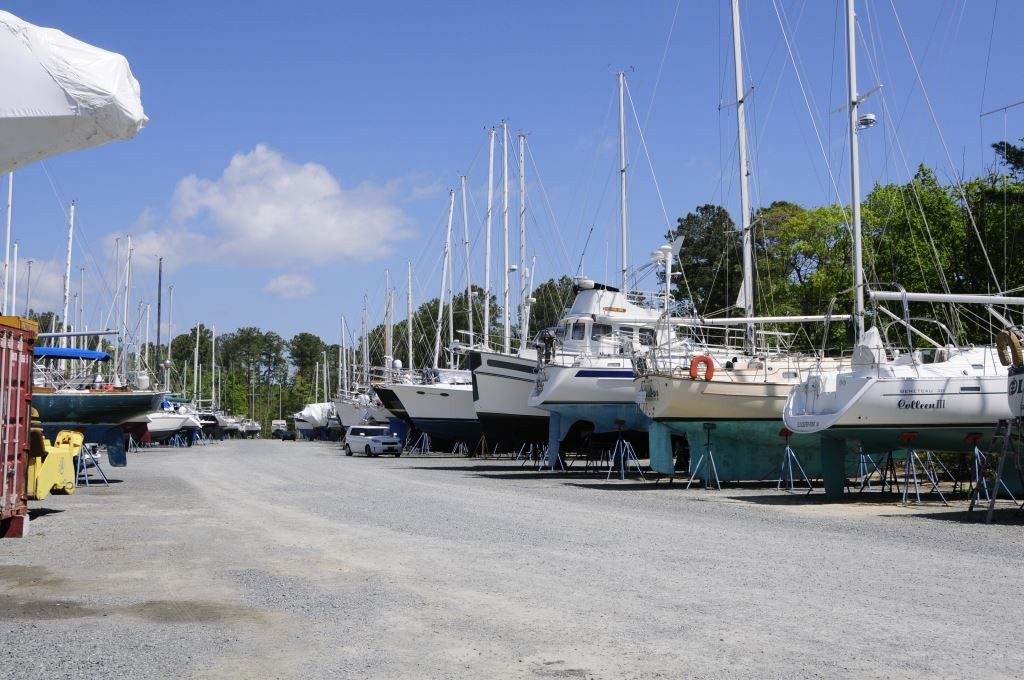 Off season storage or other yard periods are prime opportunities for sulfation to occur, where batteries often go dead unnoticed.

At this point I was able to connect the dots, with the rapid discharge, and rapid recharge, known as a surface charge, offering yet another clue.  When the batteries had been allowed to fully discharge, and remain discharged, for days it seems, they sulfated.  The problem wasn’t apparent while the vessel was dockside because the inverter/charger carried the house loads, with the batteries acting only as a buffer.  Once the batteries were called upon to begin working again, they no longer had what was needed. 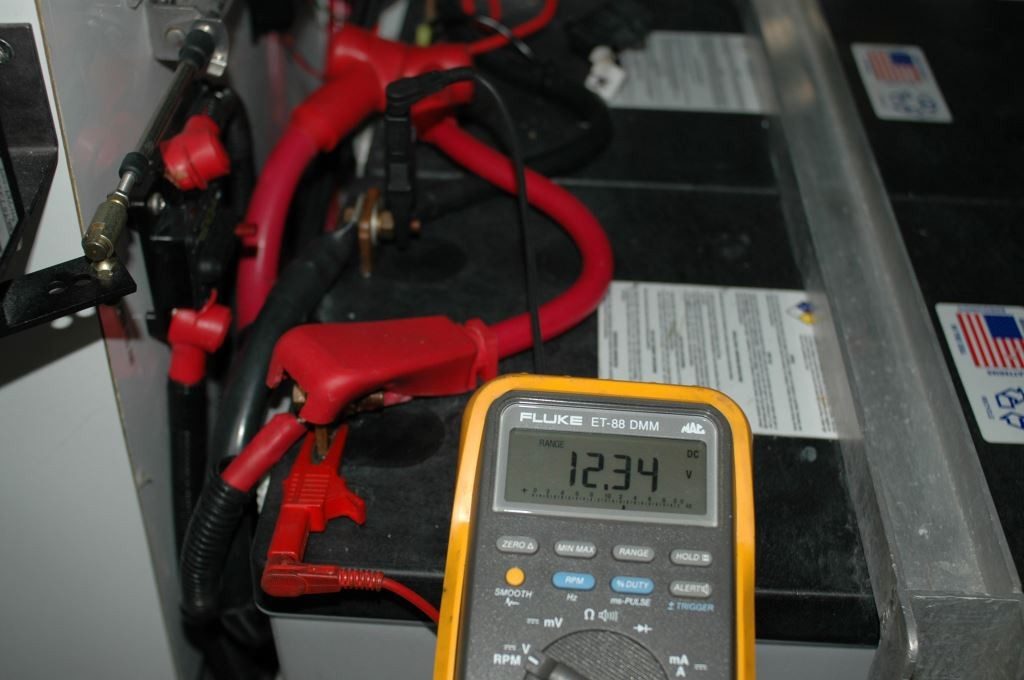 Sulfation can occur when batteries remain in a discharged state for an extended period.

The good news is these batteries were salvaged using a process referred to as an equalization or conditioning charge, which is essentially an intentional, controlled, extended over-charge, which in turn dissolves sulfation crystals.  Most inverter/chargers, chargers and some externally regulated alternator regulators, offer this feature.  Alternatively, a shop charger, one that is adjustable for voltage and current, could be used.  Beware, not every battery type and brand is capable of being equalized, most flooded, and at least one AGM manufacturer I know of, Lifeline, offer instructions for equalization, which must be followed scrupulously.  No gel battery I’ve encountered is capable of being equalized.  Some manufacturers have limited the number of equalization cycles that can be carried out over a battery’s lifetime, while others approve regular equalization.  Again, be sure to familiarize yourself with the specific battery manufacturer’s instructions before considering a conditioning or equalization charge. 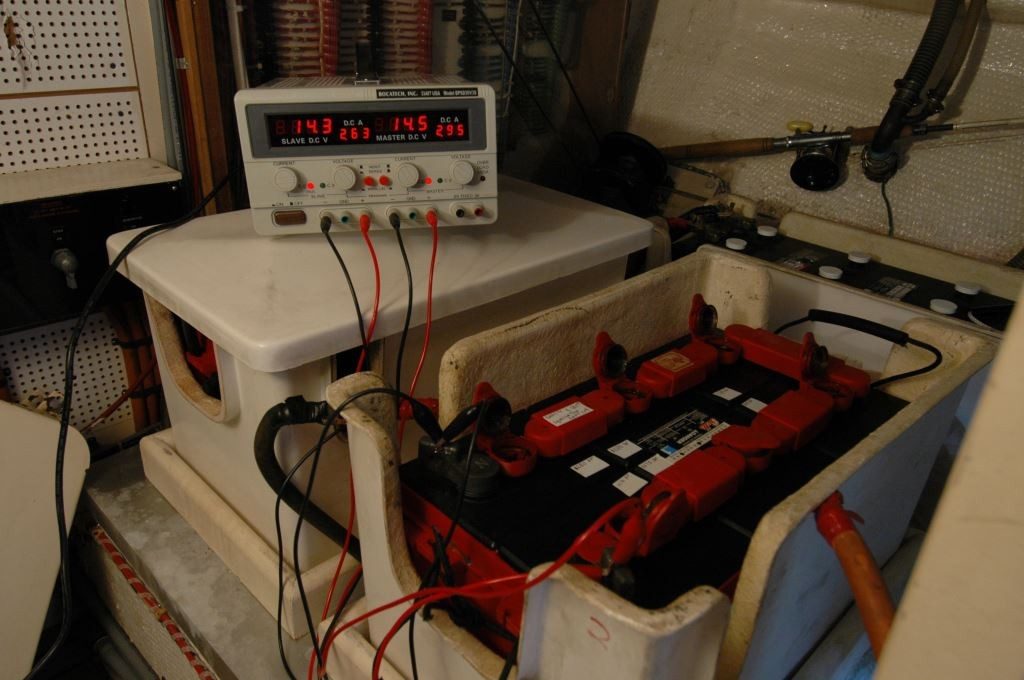 A controlled over-charge, known as equalization or conditioning, is carried out using either an adjustable current/voltage bench charger, shown here, or a vessel’s own charger that has an equalization function.

If you believe your bank is suffering from sulfation, particularly if the bank has been allowed to go dead, or is routinely under-charged, and it’s not already at the end of it natural life, it may be worth attempting equalization before subjecting yourself to the hassle and expense of replacing a battery bank.  Before undertaking a conditioning or equalization charge contact the battery manufacturer to make certain the batteries are capable of being equalized, and to confirm they are good candidates for the process.  It makes little sense to attempt to equalize a 10-year old bank, or one that’s passed the number of cycles for which it’s designed.  Young banks, on the other hand, often make good candidates for equalization.  Make certain you fully understand the equalization process.  Because the bank is subject to otherwise abnormally high voltage during the program, it’s important to ensure that voltage-sensitive gear is not exposed to the equalization charge.