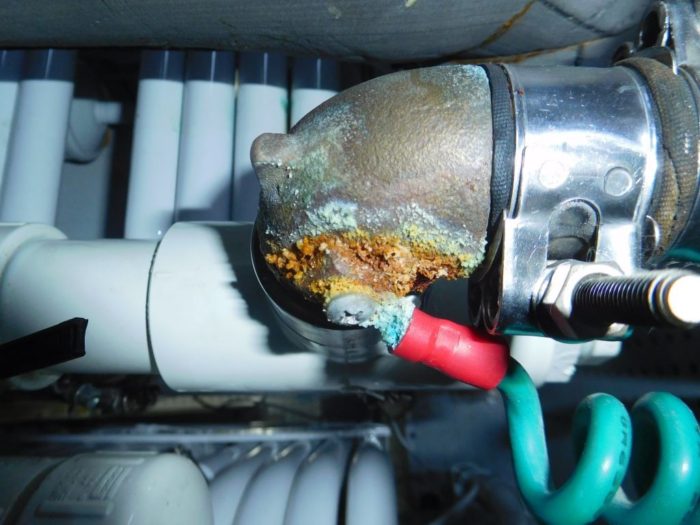 A few weeks ago a client shared with me some observations made by a surveyor, one who was looking at a friend’s boat.  The surveyor lamented the lack of bonding on raw water metallic plumbing inside the vessel, i.e. primarily pipes that carry raw water, which are not connected to the hull.  In his estimation, that was a grave oversight, one that could lead to severe corrosion.  I was wincing as I was reading the client’s e mail, while no doubt well-meaning, virtually none of the surveyors claims were accurate.

In the world of corrosion analysis and prevention, there is a phrase that’s commonly used, “in the same body of water”, which carries great significance.  For instance, anodes attached to hulls protect underwater metals via the vessel’s bonding system; the anode and through hulls, struts, rudders etc are electrically connected and thus protected.  This arrangement works by virtue of the fact that these metals, and the anode, are immersed in the same body of water.  It is for this reason that hull anodes do not protect engine heat exchangers, and heat exchanger pencil anodes do not protect propellers; because they are in different bodies of water.  Essentially, if the metals and the anode that’s protecting them can’t “see” each other, a cathodic cell cannot exist, and no protection is afforded.  Plumbing locate inside the vessel, often many feet from the nearest through hull fittings, is much too far from any anode to be protected.  The only case in which such bonding may be helpful is in the event of stray current corrosion, and for that to occur the plumbing would very likely need to be submerged in bilge water.

While there’s no harm in bonding plumbing like that shown here, such bonding should not be counted upon to prevent galvanic corrosion.  As is evidenced by this image, this fitting corroded from the inside out, in spite of being bonded.  Never the less, for minimum resistance and maximum reliability, all bonding terminal connections should be assembled using conductive paste, and when completed sprayed with heavy duty corrosion inhibitor.

My wife and I just spent three weeks aboard Enterprise III on the CUBAR rally to Mexico with Martin and Elzane. They were very pleased with your involvement with their boat. We were pleased as well as I was in charge of the Rally as we ran underway and made all ports without issue. Thank You.

Your report about the backflow preventer in the bilge pumps make sense, however once removed from the exit line, how do you keep the pump from cycling with the water flowing back into the bilge?

Thank you for the note and query.  I’m glad to hear all went well on the rally.

My advice regarding check valves is to try removing them.  In many cases they are installed de rigueur, without determining if they are genuinely needed.  The only time they are absolutely necessary is for very small bilge wells, where even a small amount of water will cause the pump to short cycle.

If you must use a valve, use the rubber flap variety, they are less prone to failure and immune to corrosion, and ensure that the pump can overcome the water column weight.  http://www.xylemflowcontrol.com/marine-and-rv/jabsco-and-rule-bilge-system-accessories/bilge-accessories/29295-series-in-line-non-return-valves.htm.

Coincidentally I wrote an editorial touching on this subject that was just published on my website this morning.  https://stevedmarineconsulting.com/photo-essay-february-2016/.

I have a 50′ CC Connie [Chris Craft Constellation] 1986 w DD 6v92’s. I have to replace starter-house batteries which are 8D’s and the generator battery is a 4D. Right now they are interstate wet cell. I’m thinking of switching to Trojan 8d AGM. I’m concerned over other changes in the system I’ll have to make.

Any words of wisdom?

On the subject of battery case size, 4D for the genset is overkill to be sure.  Check the manufacturer specifications, however, I’m virtually certain you could use GP31 or GP 27 case sizes, both are smaller, lighter and less costly batteries.  Your genset’s alternator output is not designed to charge an AGM battery, however, so that’s another issue to consider, see more on this below.

From the perspective of converting from flooded to AGM (absorbed glass mat, what’s known as a VRLA or valve regulated lead acid) batteries, while some AGM battery manufacturers will lead you to believe that these are drop in replacements, that simply isn’t true.  AGMs require a charge profile that is different than conventional flooded batteries, among other things, they have a higher charge acceptance rate and their float voltage is different than that of a flooded battery.  They also benefit from temperature compensated charging.  If you install these in place of your existing batteries, with no changes to the charging system, they will work, they likely won’t last as long as a conventional flooded battery, and the only benefit you’ll derive is not having to add water.

In order for an AGM to work properly, and provide a long service life, its charge sources, which include the alternator regulator and battery charger or inverter/charger, must be designed and programmed for use with AGM batteries.  Failing to do so will lead to premature battery failure.  Additionally, you’ll fail to derive the greatest benefit from the move to AGM, namely their ability accept a charge much more quickly than conventional flooded batteries.

How would one check for stray current corrosion on an aluminum sailboat? Also, what would be the procedure for a fiberglass boat?

Any web sites or references that you can send me to that address this topic?

The voltages from my reference cell are fine but some of the boats around me are going through zincs quickly.

Thanks for any info or direction that you can provide.

Stray current corrosion originates at a vessel’s battery and DC system, leaking positive voltage into the water, which can be especially destructive.  It’s been known to consume a propeller or stern drive in weeks.  The answer to your question could fill a booklet, if not a book.  I’m afraid the subject is exceptionally broad and not easily covered, not in a response of this sort at least.  The ABYC corrosion certification seminar I attended lasted a week, before a 200 question exam was administered.

Having said that, there are two books I can recommend, which you may find useful.  Charlie Wing’s “Boatowner’s Illustrated Electrical Handbook” vol. II, and Ev Collier’s “Boatowner’s Guide to Corrosion”.  These will provide guidance for analysis of various types of corrosion, including stray current and galvanic.

I’ve written several articles on the subject of corrosion; however, from the perspective of anode consumption, you may find this one of interest http://www.passagemaker.com/channels/galvanic-isolators-and-%C2%93zinc%C2%94-anode-selection/

Happy spring to you and your family.  I’m in the process of commissioning my tug boat for the season and did a fair amount of re-wiring to make the runs are neater and the terminations better.  I read with interest your most recent photo essay because I’ve been leaving my zip ties uncut for all the reasons you noted.  I don’t like the look but I do like it better than the cuts on my forearms.

In your essay you mentioned a proprietary flush cut tool.  I presume this works with what I’m calling zip ties.  If so, can you give me a company name or model number?  This is something I want to add to my tool kit.

I should have mentioned that in the column.  Several manufacturers offer this type of tool, however, as fa as I can tell they all work the same and look very similar.  They are often referred to as “shear-cutters”.  They are designed for ‘flush cutting’ cutting wire up to 20 gauge, however, they cut wire or zip ties very well, leaving a square, or blunt rather than tapered, knife-like edge.

The model I’ve used for years is a Xcelite 175M, it’s readily available on line from many suppliers.  They cost about $8, and are well worth every penny.