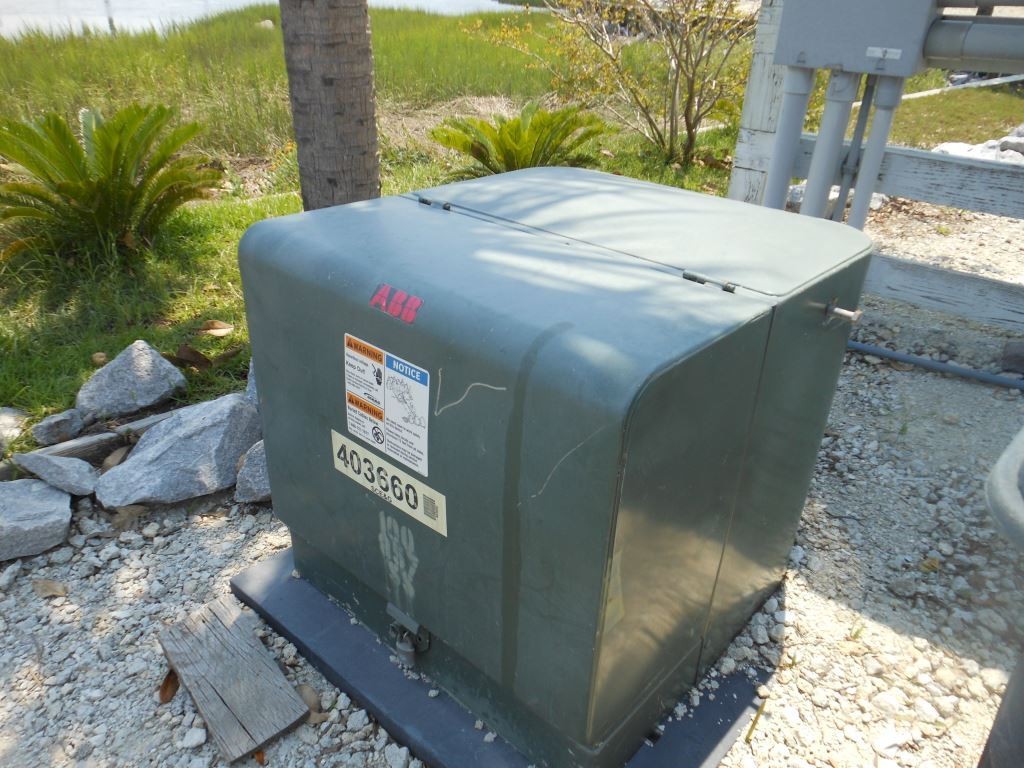 Yet another boat fire occurred just a few days ago, on Guntersville Lake in northeastern Alabama, this time with the loss of 8 souls.  Last November, I wrote about the Conception dive boat fire, wherein 34 lives were lost; it’s a trend that’s unsettling.  I’ve written about boat fires on many occasions, too many.  The first time I covered such an event, it was in my home town of Deltaville, Virginia where a man’s boat caught fire, the result of faulty wiring supplying a space heater, claiming his life and that of his 11-year old daughter.  That was in 1999, and since then I’ve written about this subject on at least two dozen occasions.  There’s one thing all of these fires have in common, most if not all were avoidable, and in no case should there have been fatalities.  I firmly believe early detection would have either prevented them, or would have allowed those aboard sufficient time to escape.

Authorities are investigating the cause of this fire, however, one vessel in particular has come under closer scrutiny.  For the moment, no additional information is available; as always, my hope is the cause is definitively determined, so that others may learn from this otherwise horrific loss. The marina in which this fire occurred contained many house occupied boats.  Six of those lost include a mother and her five children, Grace Annette Watson Miles, 40, and Christopher Zane Long, 19; Bryli Anniston Long, 16; Trayden Dominic Miles, 10; Kesston Damien Miles, 9; and Dezli Nicole Miles, 7.

I’ll use this opportunity to pound the smoke alarm drum once again.  In short, there should be a smoke alarm on both sides of every door, throughout your vessel, as well as in the engine room and behind electrical panels.  Smoke alarms are readily available and inexpensive, and as of last year mandated where ABYC compliance is sought.  Unless they are of the multi-year variety, be sure to change batteries at least annually; don’t wait for the alarm to begin chirping to remind you.

For more details on smoke alarm selection and placement, see this column, which was inspired by a pair of back to back boat fires, one in Florida and another in Thailand. 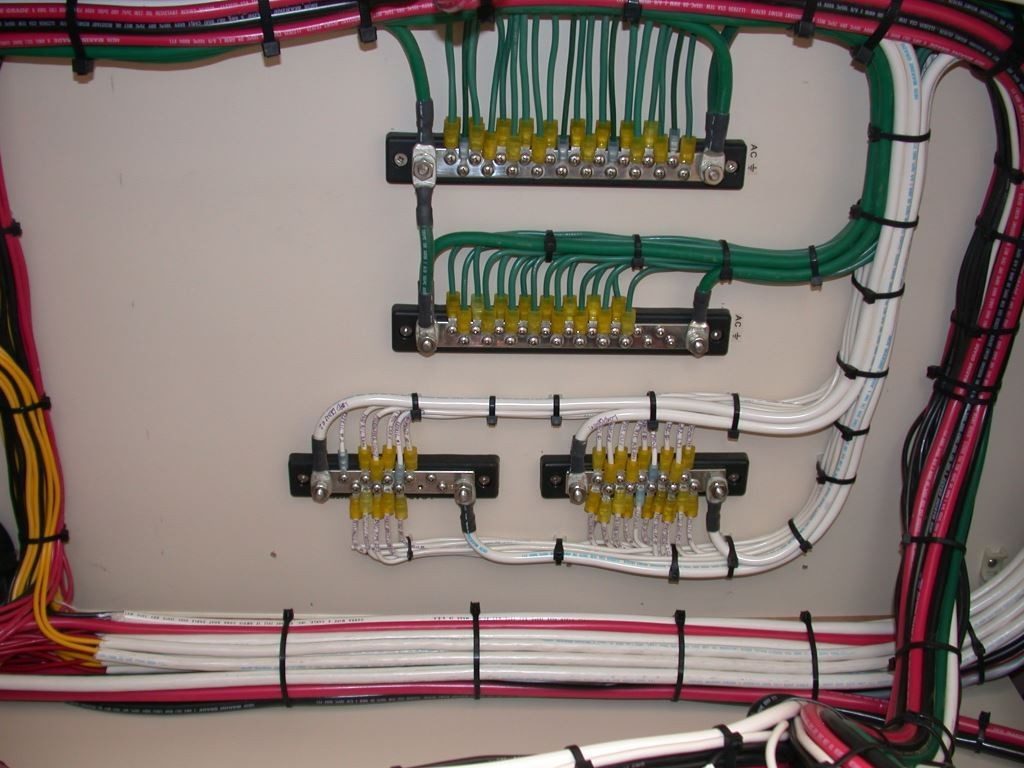 With few exceptions, the AC safety ground and AC neutral grounded wires, green and white here respectively, should not be connected aboard the vessel.

As boat owners, we have come to expect shore power and other AC systems as part and parcel of life afloat.  The safety and reliability standards for AC shore power systems, which include the shore cord supply, generators and inverters, referred to simply as “AC” from here on, are necessarily strict, and the onus is on the professional to fully understand how they work as well as the subtleties that differentiate them from systems used ashore.  A failure in, or incorrect wiring of, this system could have catastrophic consequences, ranging from fire to electrocution.  The insidiousness of this problem is especially concerning in that incorrect wiring often exhibits no obvious signs or clues, until a fault occurs.  It is therefore necessary that all AC systems fully comply with the ABYC guidelines on this subject.   Regrettably, this is often not the case and violations of this guideline are as likely to be found aboard new as well as used vessels.  Furthermore, as professionals in the industry know, the guidelines are not always easily deciphered, understood or applied.

Although there are of course exceptions, typical AC wiring installations found aboard vessels up to about 75 feet are usually of the single-phase variety.  Meaning, for 120 volt service, the wiring configuration consists of three conductors, a hot (analogous to DC positive, just more voltage, alternating current and potentially lethal), a neutral (sometimes referred to as grounded, analogous to DC negative) and a safety grounding (note the terminology, -ed vs. -ing, grounded vs. grounding, normally this conductor is not considered a current carrier unless and until there is a fault), which are typically black, white and green respectively.  Connections between the hot and the neutral provide 120 volts.  For 240-volt service, another hot conductor is added (these are often referred to as L1 and L2, or line 1 and line 2), it’s typically red. Connections between the black and red provide 240 volts.  Other colors may be used within the parameters of the standards.  Some Asian and European builders, for instance, utilize light blue in place of white and brown, orange or blue for hot conductors.   Various striped patterns are also used, the most common of which is for the green grounding conductor, and this is often seen as green with a yellow stripe.  Other colors used within this system may violate ABYC guidelines and thus should, to prevent confusion, be avoided. 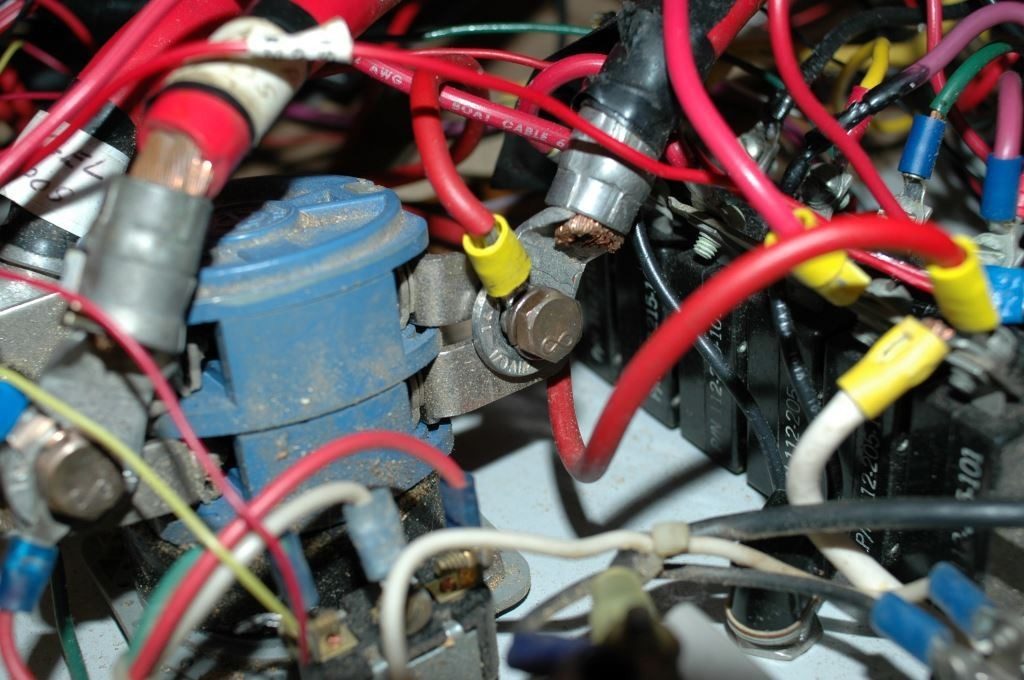 Wiring attention to detail plays a significant role in shore power safety.  A small error, with no outward indication of a problem, can have life-threatening results.

The function of the green grounding conductor, as mentioned above, is to conduct fault current safely to ground.  This may seem intuitive; however, it’s what happens during or after that conductor does this that is not often discussed or well understood.  When fault current is conducted to ground the immediate result should be the tripping of a circuit breaker (while fuses can be used in some shore power scenarios, circuit breakers should, and are most often used, as there is a requirement for breaking both hot and neutral simultaneously, an event that is not possible with fuses), effectively shutting off the power. The green grounding conductor must be sized so that it is capable of safely carrying fault current without overheating.   This conductor could be thought of in much the same way as you might think about insurance or seat belts, you hope you never need it, however, on the rare occasions when you do you want to be certain it will work.

The green AC safety grounding conductor is often part of a larger ground system aboard the vessel, which consists of the bonding system and the DC negative system.  If ABYC guidelines are followed, these other “ground” systems are interconnected. 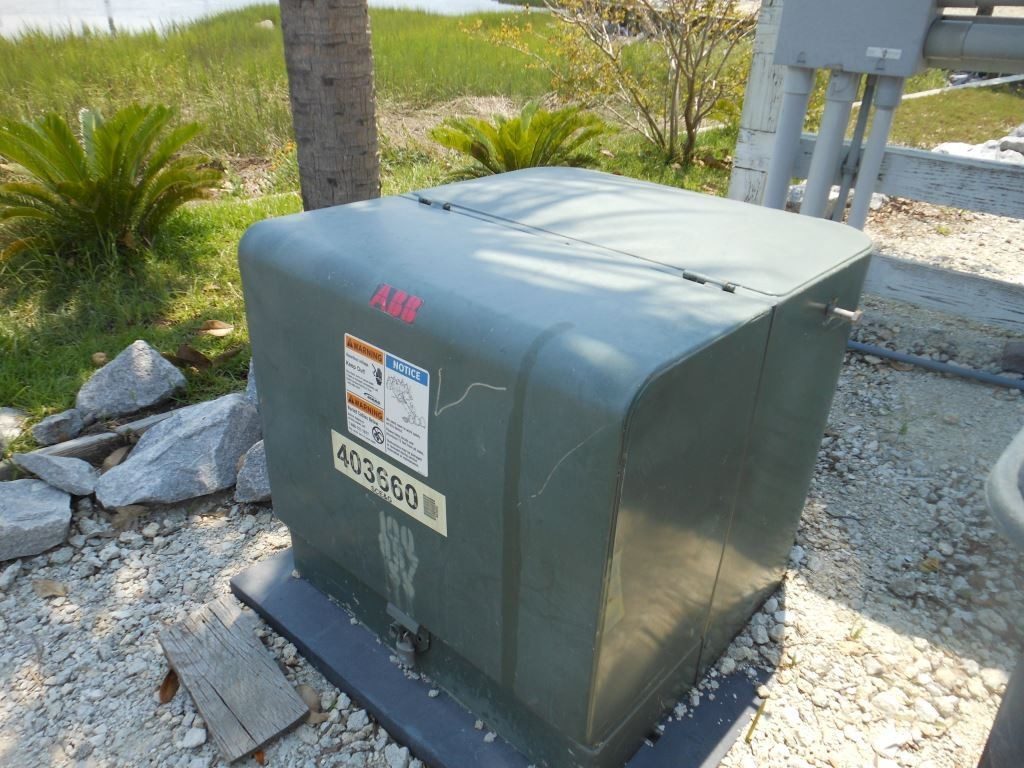 The transformer that supplies the dock’s shore power is considered a source; all power on those docks will return, or attempt to return, to this source.    In the event of a fault, one of those paths may be through the water.

The following real-life example may explain why a working ground system is so vitally important.  While carrying out a plumbing repair in a galley, I brushed my sleeved arm against the stainless steel case of the microwave oven.  I felt a slight tingle.  My first inclination was to touch the oven casing with my hand to confirm what I’d felt, however, having been shocked a few times in my career I resisted that temptation.  Instead, I used a multimeter to measure voltage between the microwave and the sink; I was touching the latter with my hand when I felt the tingle.  To my amazement it read 113 volts AC.  I shut the power down and removed the microwave.  A screw had recently been driven through the cord into the microwave case, exposing the hot conductor, and the receptacle to which it was wired lacked a ground.   This enabled the case to become energized and because the AC safety grounding conductor was not intact, it remained that way.  Had I been wearing short sleeves I likely would have received a shock or worse.  If the receptacle had been properly wired, fault current would have been safely conducted to ground.  Why then, you may ask, is it important for the aforementioned ground systems to be interconnected?  Take the above scenario and substitute a raw water strainer for the microwave.  A shore power hot conductor chafes against the strainer; if it’s bonded and the bonding system is connected to the AC safety grounding system as it should be, the fault is conducted safely to ground, where it trips an AC breaker, and the fault is “cleared”.

In a residential or commercial electrical service, it’s common practice for the AC safety grounding conductor bus to be connected to the neutral bus.  If you’ve ever looked into a main electrical panel ashore, (not a sub panel as might be found in garage or outbuilding), you will typically see white wires sharing a bus with un-insulated wires, the latter are AC safety grounding conductors, or you may see two separate busses that are connected.  While this practice is fine ashore, it most certainly does not work aboard a boat, and it’s where many do-it-yourselfers or otherwise experienced residential/commercial and some marine electricians, make a potentially fatal flaw when installing or servicing marine electrical systems. 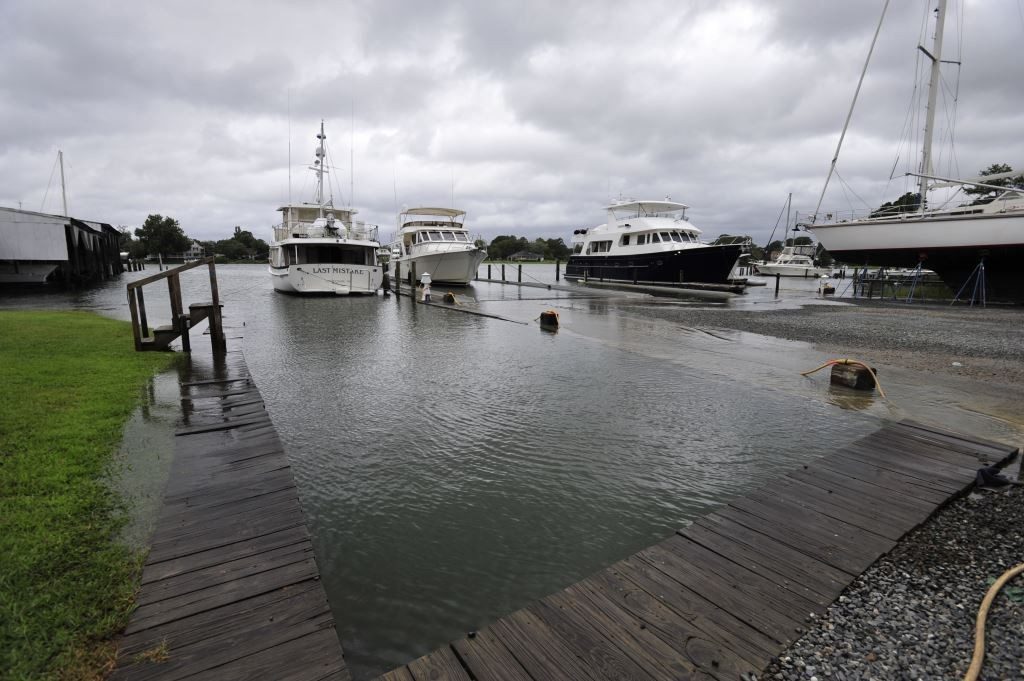 Seemingly placid water could be concealing leaking AC current, the result of an inappropriate neutral to ground connection.

In a properly wired system, current traveling aboard on the hot wire returns solely through the white wire; however, because a boat, unlike a house, floats in a conductive medium, interconnecting the green and white wires aboard affords current returning to its source, the transformer ashore, in the marina parking lot or on a utility pole in this case, three rather than a single return path, the white wire and the now connected green wire, and through the water via bonded underwater metal hardware such as the engine/propeller, strainers, seacocks etc. Contrary to popular belief, electricity takes all paths back to its source, not just the path of least resistance.  This presents a clear hazard to swimmers and those aboard may also be at risk, as well as a fire risk, depending upon the nature of the fault.  For more on electric shock drowning see this article. 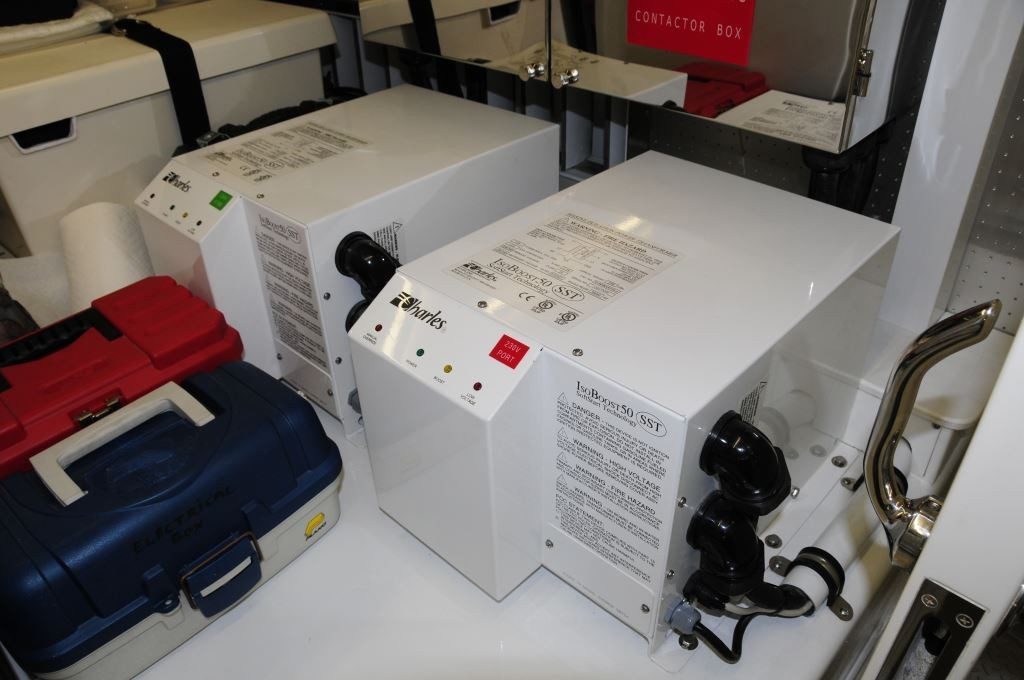 It is vitally important, therefore, that the connection between the AC safety grounding wire and the neutral wire occur only at the source of power, when it is the source of power.  That means, at the transformer ashore, supplying the dock shore cord, or at a generator or inverter when and only when they are supplying power to the vessel.  There are exceptions to this rule that involve the use of transformers; for more on that see this comprehensive article.  Incidentally, the installation of a shore power transformer markedly improves the safety of virtually any vessel’s shore power installation, in that it acts as a power source, which means fault or leakage AC current no longer travels through the water around the vessel, as it has no reference to the transformer ashore. 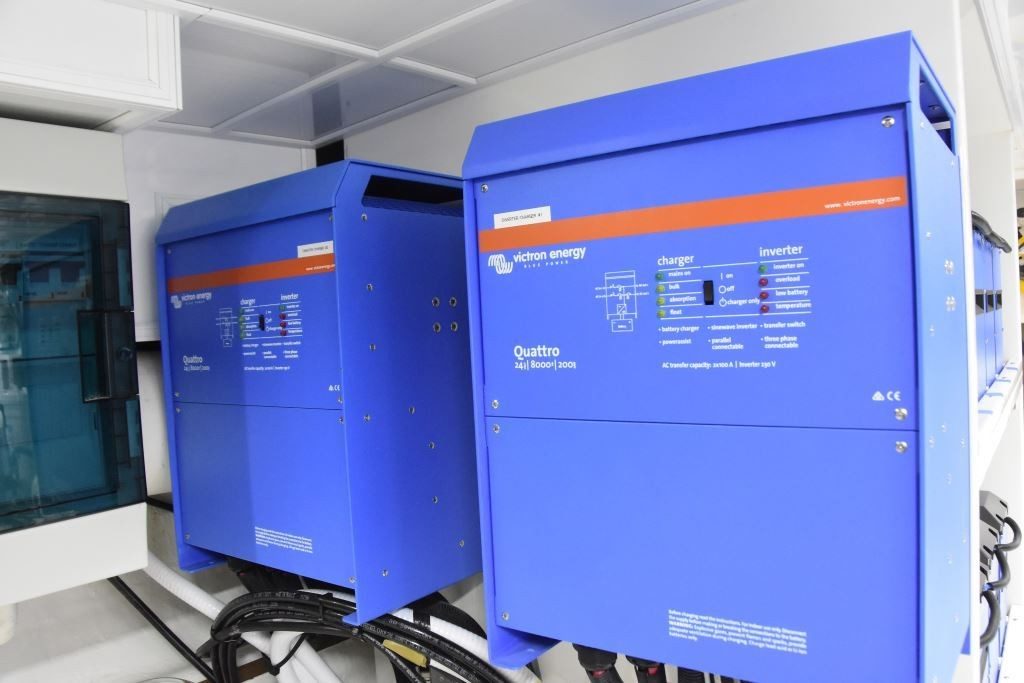 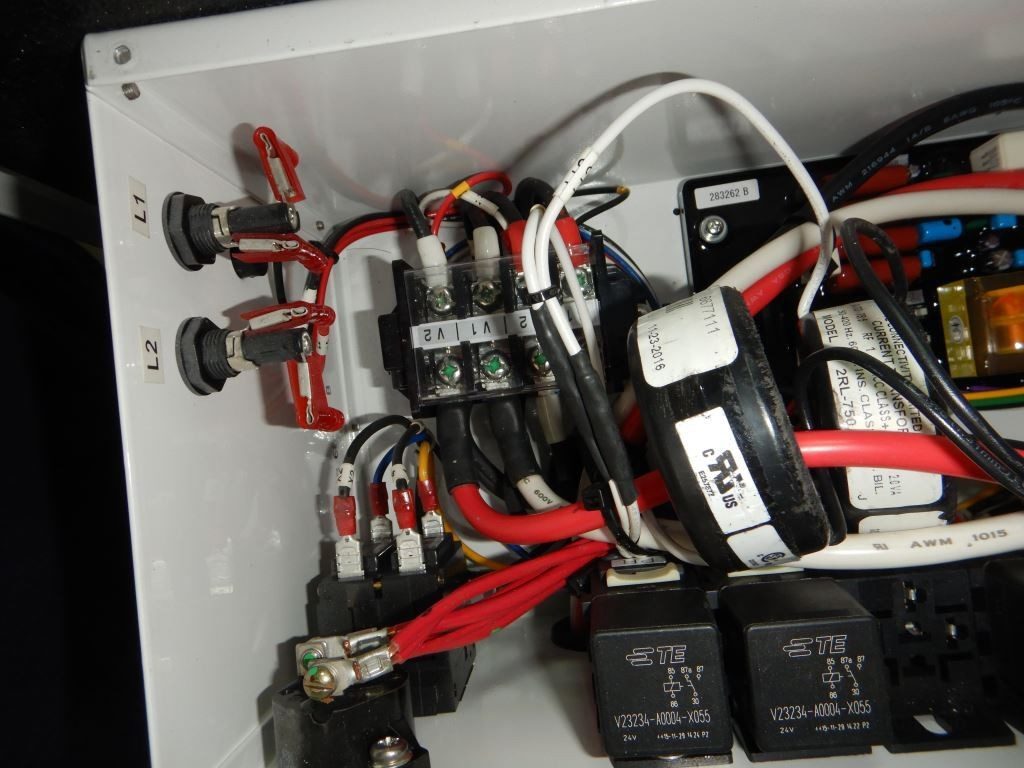 Generators and inverters are a source of power, and thus when they are producing power, their neutral and ground wires must be bonded to each other.

If you have doubts about the neutral to ground connection(s) aboard any vessel’s AC safety grounding system, have an ABYC Certified marine electrician check this, typically all that’s needed is a multimeter…and someone who knows how to use it.