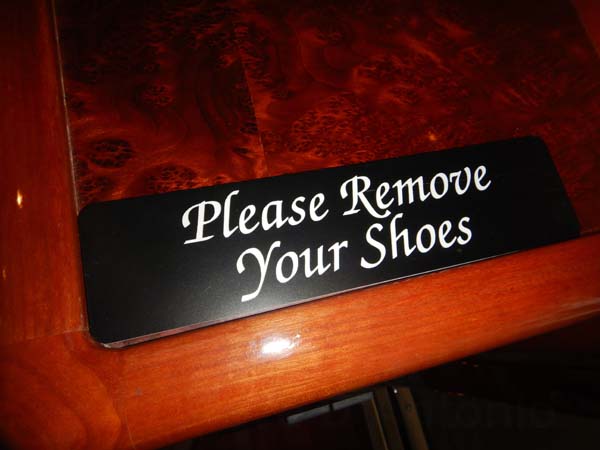 It’s a veritable right of passage for those working on boats, removing one’s shoes is a courtesy that has been in effect aboard yachts for ages.  It no doubt is rooted in the protection of immaculately varnished soles found aboard many vessels (although today those are far less common), on which one errant stone, or a few grains of misplaced sand, could wreak havoc.  But does it really make sense for those working on boats, rather than simply visiting or spending time aboard as guests?

A few weeks ago, I encountered a crew of young, strong men hefting a dozen large batteries into their resting places in a lazarette; all were either barefoot or in stocking feet.  I cringed at the very sight, and I’m sure an OSHA inspector would as well, in addition to whipping out his citation book.  Bare feet are not only more injury-prone, one is far more likely to slip in stocking as feet.

I believe this outdated tradition needs to be amended, at least for engineering spaces.  I always wear shoes in engine rooms and engineering spaces, regardless of the vessel’s shoe policy, there’s simply no good, safe reason to go barefoot in these spaces.  It’s time for the marine industry to stand up to this outdated custom, and put our shoes on.

I’m re-bedding some rail stanchions, and am trying to decide on bedding material.  I read your article concerning this several times over the years, but when removing other stanchions as preventive maintenance over the years, I have found that quite often the sulfide-based caulk has been adhered very well to the gelcoat, but has failed on the Stainless plates.  I’m thinking about butyl tape this time-thoughts?

You’ve hit on a phenomenon that is unknown to many boaters and boat builders.  Most polyurethane and polysulfide bedding compounds do not adhere well, or for long, to stainless steel.  I haven’t quizzed a sealant manufacturer about this, however I suspect the cause is two-fold.  One, most stainless steel is contaminated with polishing  or cutting oil.  If these are not cleaned before installation, the adhesion of the sealant will be compromised.  Two, stainless steel almost instantly develops an oxide film upon exposure to air, it’s what keeps it corrosion resistant. That film can play a role in compromising adhesion as well.

Preparation of stainless steel, and all surfaces to be bedded, is critical.  It should include de-waxing/de-greasing the surfaces using a solvent.  Then, polished stainless surfaces should be made slightly rough using Emory cloth.

These links will take you to a series of articles on the subject, including sealant selection as well as prep and installation.

I recently rebeded the stern tube on my Island Packet 27.  I took extra care to make sure it was aligned properly and as a final check per your article on shaft alignment put a dial indicator on the shaft and found nearly .010″ runout.  I separated the shaft from the transmission and  checked the transmission side of the coupling with nothing attached and still had the same amount of runout.  I cannot find a spec anywhere in Yanmar’s manual about what amount is acceptable.  There is no mention of runout anywhere that I could find.  Googling also didn’t turn up anything.  Should I pull the transmission and replace the seal and roller bearing? I have a Vetus Bulflex coupling but I wanted to make sure everything was as close as possible with the solid coupling before installing that, which will mean shortening the shaft.

The runout you describe at the transmission is excessive.  For a shaft up to 1-15/16 diameter, the permissible straightness tolerance at 42” intervals is 0.006”.  You’ve exceeded that at, as you’ve noted, the transmission coupling alone.

The bearing could be worn or damaged, however, I would not expect that to yield the same runout, in the same quadrant of the coupling, with each revolution.  If you are certain the coupling variation from center is this great, I would consult a marine transmission repair shop for recommendations on how this would be corrected.

As an aside, I’m no fan of flexible couplings, they are a weak link, they wear out and they make alignment between coupling faces impossible.

I’m an ABYC member and marine professional certified for electrical and corrosion work. Also, an avid reader of your columns and articles.

I have found considerable confusion over the following question in the marine electrical community – and in my own head.

The question concerns the use of multiple simultaneous charging sources to charge a single battery bank (generally a large house bank).

As a practical matter I have come across this question most often when someone wants to use 2 engine alternators to charge one large bank – typically on a sailboat, where there is a dedicated start battery alternator provided with the engine and a higher capacity marine alternator which has been added on for the house bank. Usually the start battery alternator is internally regulated and the ad-on alternator externally regulated with a “smart” regulator.  Sometimes the original start alternator has been replaced with another high capacity alternator. In any case, the desire is to obtain as much charging capacity as possible for a large house bank, often with AGM batteries that can accept a high rate of charge, and to do this as quickly as possible to limit engine run time. (Which also would have the positive side effect of increasing load on the diesel, which is often run at idle or slow speed for relatively short periods when at anchor for charging or for leaving a harbor under power). The assumption is that the start battery would be charged up quickly, after which the start battery alternator could be used to help charge the house bank. The scheme by which the two banks (start and house) would be configured to the two alternators’ outputs can vary in configuration, and is secondary to the main question, I think.

Does this actually happen? I have found different answers to this, one answer being that it only happens when the batteries are close to being fully charged, when the 2nd alternator wouldn’t be needed anyway, so it is not so important.

Balmar, Ample and some other manufacturers have regulators that control multiple alternators which implies there is a problem. Sterling has a device that can do this also but in a different way and I have seen this addressed in various other ways.

What is your take on this?

You’ve posed a question that’s been asked many times.

Having worked with and on, as well as designing and installing, high output charging systems, for nearly three decades, the issue of multiple simultaneous charge sources is less of a problem than some believe.  Generally speaking, all of the charge sources, alternators and shore/gen-powered chargers, are self-regulating.  That is, while they may not always work as efficiently as possible, having two or more connected to the same battery bank simultaneously isn’t harmful.

For a fully or nearly fully charged battery, in the case of two independently-regulated alternators, or an alternator and battery charger, one will often sense the output of the other and, as you note, and shut down.  In the case of an alternator and a charger, the former nearly always shuts down.  Again, this is not harmful and it is a reflection of the battery’s state of charge.

Having worked with very large battery banks on cruising power vessels, some of which are upwards of 2,000 Ah at 24 volts, and which are charged from multiple sources, which might include a mix of alternators and chargers, the format is typically one wherein the bank is heavily depleted, it’s all hands on deck, every charge source is on line.  As the bank accepts charge, charge sources begin to drop off line, with alternators going first if chargers are present.

Having said all that, the system can be tweaked, adjusting charger parameters to ensure charge sources remain on line for as long as the battery can accept charge.  For twin alternator set ups, I nearly always choose a single regulator, enabling the alternators to act as one, in a synchronized fashion.  For a single engine, twin alternator (with both outputs going to a single bank) installation, a single suitable regulator (or two regulators that are designed to be interfaced), with no additional gear, can be used, and that’s my preference.  For twin engine, twin alternator installations it can be slightly more complex, as these need a means of preventing the alternator of a non-running engine from having its field energized.  However, that’s easily accomplished, and again the alternators work in concert when both engines are running.

Start batteries can be charged from a house bank using paralleling devices such as, among many others, a Blue Sea ACR or, for a bit more control, a Magnum SBC.  Above all else, it’s critically important that regulators and chargers be programmed for the battery type, that they sense voltage properly and from the proper location, and that they are temperature-compensated.

For more on this subject please follow this link and this link.

Our marina owner insists that we should replace our shore power cords every five years. My understanding is that the copper cable inside should last for decades but that the connectors at each end may corrode or not connect tightly and cause increased resistance, possibly overheating. I have these questions.

Will older cords increase my electricity use (and bill)?

Thank you for the thorough answers you regularly provide.

Your marina owner is to be commended for his diligence where shore power cord condition is concerned.  Most boat fires are related to shore power.  I suspect, however, he, or perhaps his insurer, is erring on the side of being overly conservative.  Arbitrarily condemning a shore power cord because it’s five years old is not a practice I’d endorse, nor is it endorsed or practiced within the industry.  By contrast, a one-year old cord whose end has fallen into the water, and continues to be used, or a two-year-old cord whose owner is routinely unplugging and plugging it in while under load, is a far greater risk.

Older cords do not, because of their age, consume more electricity per se.  However, if the cord ends are damaged, corroded or otherwise defective in such a way as to increase resistance, that will lead to heat production.  Heating consumes electricity without doing any work for you, and yet it’s still recorded by the power meter, which is how your bill is calculated.  It can of course also lead to a fire.  If the cords are not overheating then no, regardless of age, they are not increasing your energy cost.

I would not recommend preemptively replacing cord ends, or entire cords for that matter, if there is no evidence of deterioration, damage, corrosion or overheating.

Rather than a replacement interval, I’d recommend closely inspecting the cod ends before and after making every connection, look for signs of overheating, pitting and corrosion.  I routinely sniff cord ends as well, if they smell burnt, then at the very least disassembly and a closer inspection is in order.

You might find this article on the subject of shore power cords of interest.