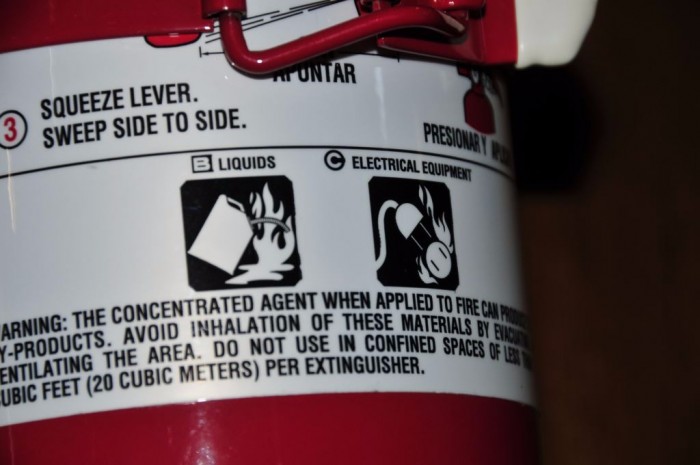 When you receive this month’s Ezine I’ll be on my way to Australia, where I will deliver a lecture for a group of boat owners near Sydney, as well as inspecting a new vessel that’s under construction in that area.

As I noted in last month’s editorial, which I wrote while making a passage among the islands of the rugged, sparsely populated southwest Alaska Peninsula, cruising in remote locations is a passion of mine.  And as I mentioned then, these journeys keep me sharp and cognizant of what cruisers face on a daily basis, what works and what doesn’t, and this passage was no exception.  In addition to being delayed in Anchorage for  three days as a result of inclement weather at my destination airport, one of the two vessels I traveled aboard, for the first three weeks and 1,200 nautical miles, suffered from only one major mechanical failure, a burned out windlass motor, necessitating a five day stay in port until a replacement could be flown in.

This episode, while far from catastrophic, and virtually unavoidable, reinforced the importance of redundancy in critical systems.  Most vessels have just one windlass, have you thought about what you would do if yours failed, particularly if you are far from help?  Dual windlasses, once very rare indeed, are becoming more popular on long range and expedition type cruising vessel designs.  Does your windlass have a manual retrieval capability and if so have you tried it, with a substantial amount of rode deployed? As I write this, I just read on one of the boat owner forums to which I belong, the following post, “We had a recent failure of the windlass motor and ended up stranded in a very remote bay for 4 days”.  I rest my case.  I encourage vessel owners and operators to pose these questions to themselves, “What would I do if…,” fill in the blank, windlass, generator, engine, inverter, sanitation system etc, “fails, what’s my back up plan?” 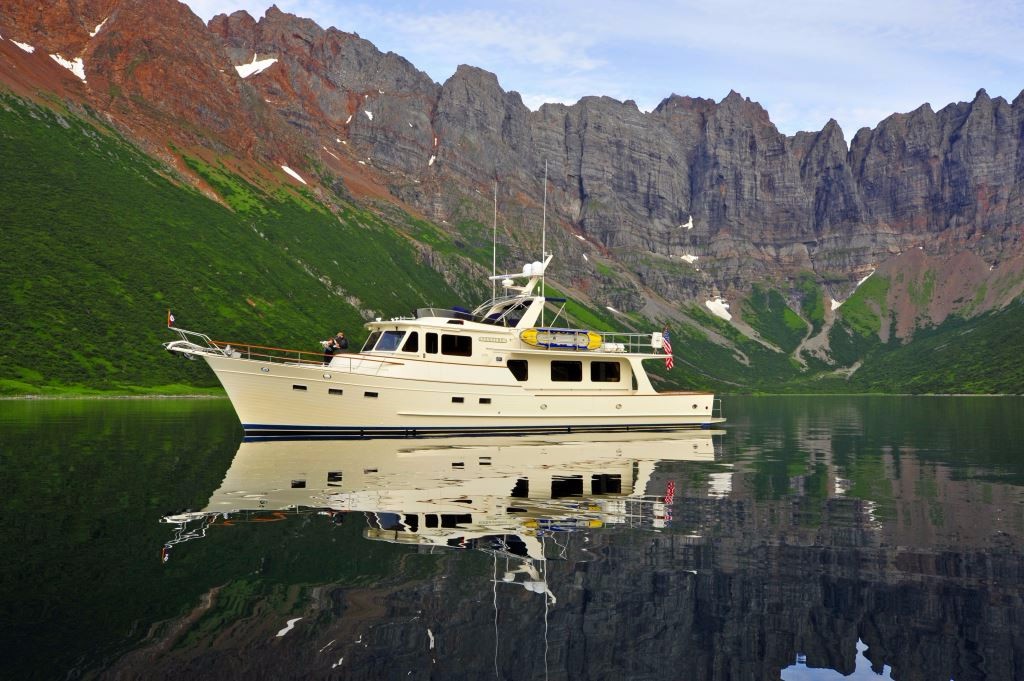 Venture, a Fleming 65 owned by Tony Fleming, anchored, alone in a remote cove along the Alaskan Peninsula.  Hull number one of the 65 series, this vessel has covered over 60,000 miles since she was commissioned in 2005, including cruising the Saint Lawrence Seaway, the Panama Canal, Alaska on several occasions and the Galapagos Islands.

The time I spent aboard these two vessels was both rewarding and enjoyable.   Alaska’s geography, landscapes, seascapes, and wildlife, are truly gems to behold.  Perhaps the most compelling aspect of Alaska, particularly the southwest Peninsula, is its sheer remoteness and lack of human presence.  Anchorages were usually shared with nothing more than seals, bears and birds, and other cruising vessels were only notable by how rarely they were encountered.  Look for a detailed article about this passage in an upcoming Ezine.

This month’s Ezine feature covers the subject of portable fire extinguishers, a subject which confounds many boat owners or, worse, one that’s given no thought at all.  I hope you find it both interesting and useful. 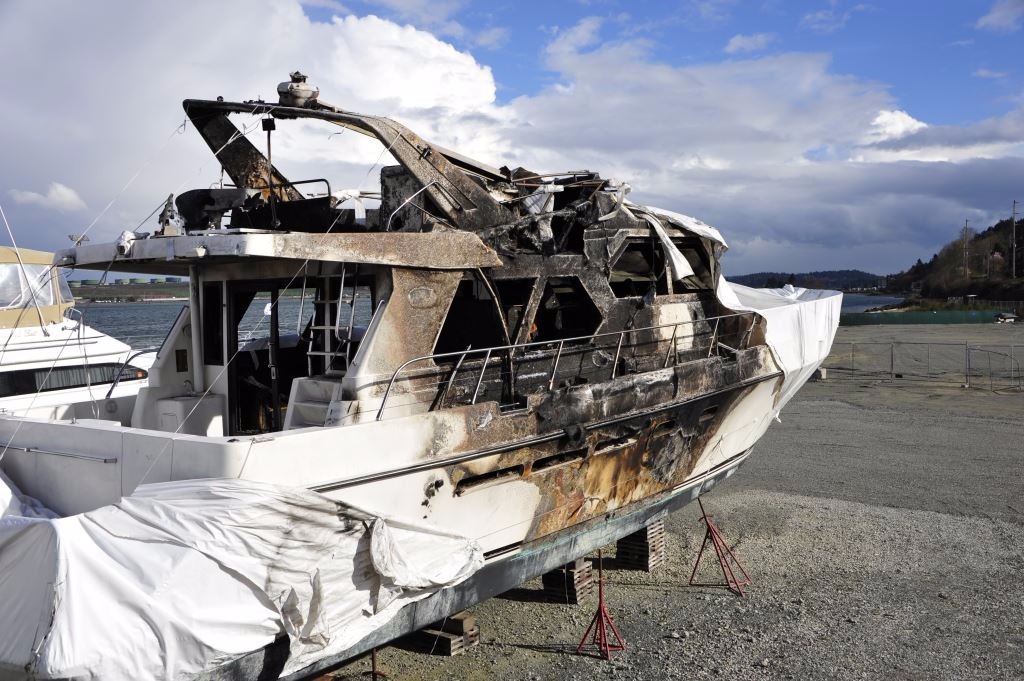 Fire, it’s among a mariner’s worst nightmares.  Every vessel owner, operator and crew member should be well-versed in the techniques and equipment needed to fight fires in their early stages.

“We’re on fire!” Words that no mariner wishes to hear, yet, it’s a phrase for which all prudent mariners need to be prepared.  A few months ago I received a call from clients explaining that they’d had just such an experience.  What transpired, and the manner in which they dealt with it, reinforced the importance of ensuring that every vessel has the ideal firefighting tools.

In this case, the vessel was maneuvering in a harbor setting when the fire occurred, in the engine room.  For the purposes of this discussion, the cause of the fire, which occurred on an engine, is less important than what occurred afterward.  While idling slowly the crew, who were in the pilothouse, noted the unmistakable odor of an electrical fire.  They quickly scanned their instruments as well as the engine room video monitor; the latter was filled with a thick pall of white smoke.  With a portable dry chemical fire extinguisher taken from the pilothouse, one of them proceeded to the engine room, looking through the access door’s window he sized up the situation, took a deep breath, leapt in and loosed the contents of the extinguisher onto the fire, and then raced back out.  His efforts were successful; the fire was quickly extinguished, as can be seen in this video clip of a fire in the making.

Only later did they realize their video monitoring system recorded the entire event, which they’ve allowed me to share with readers for educational purposes.

While the vessel’s engine room is equipped with a smoke detector (this is an essential component) of the central station variety, it was temporarily disabled because it was sounding false alarms.  Even if it had been working, it’s unlikely it would have given them very much notice, as the episode progressed extremely rapidly, as can once again be seen on the video. 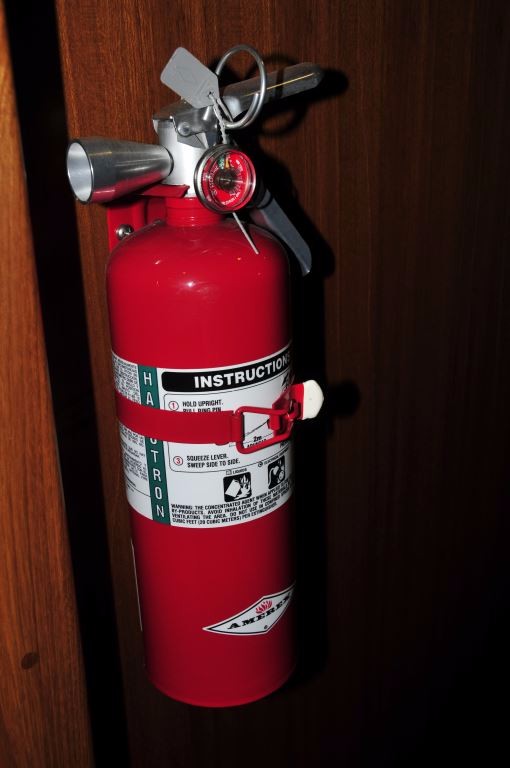 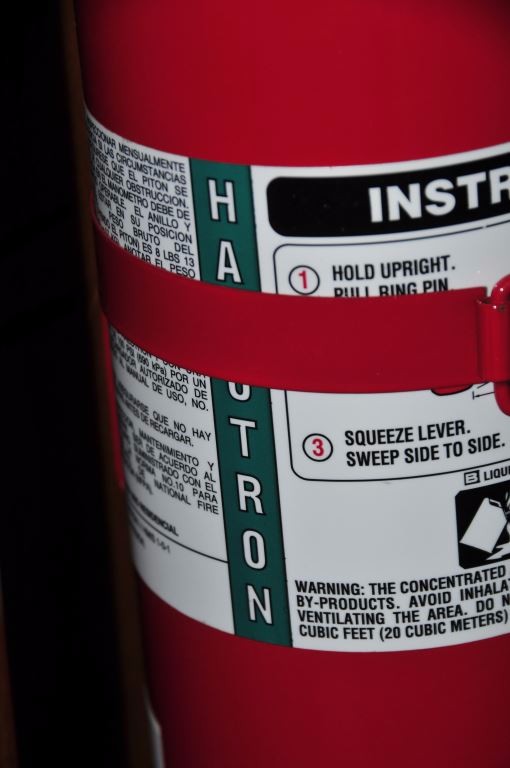 Not all portable fire extinguishers are created equal, there is a dizzying array of types, sizes and classifications.  The fire extinguisher shown here is unlike those most often found aboard recreational vessels, it contains a gaseous, “clean” agent that’s designed to be used on electrical and electronic equipment fires.

Several who have watched the video have asked why the crew simply didn’t discharge the engine room’s gaseous, fixed firefighting system.  While that is one course of action, doing so represents a significant investment of sorts, in that re-charging it is costly, and while expense is of no consequence when it comes to firefighting, for small, isolated electrical fires, as this one was, consideration should initially be given to a localized approach toward extinguishing the flames.   Additionally, once the fixed system is discharged, the engine room is thereafter unprotected, until it’s recharged; which, if cruising in a remote area, could be some time. 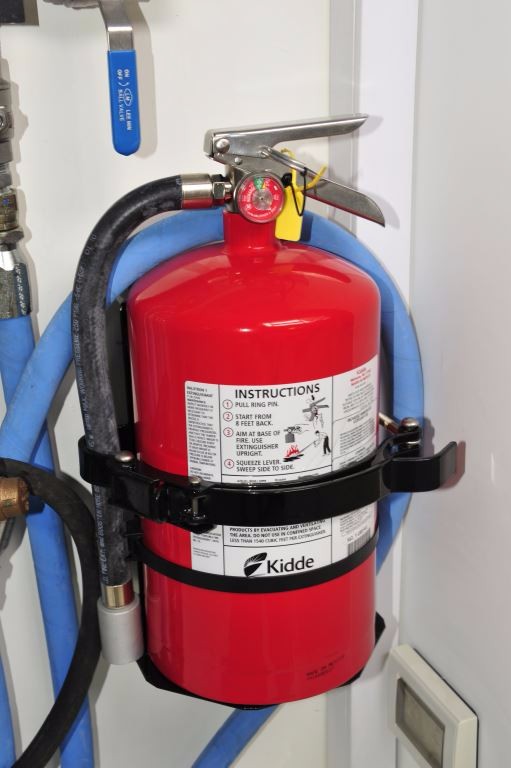 Portable fire extinguishers should be chosen based on the type of fire they may be called upon to fight, as well as the location.  It makes sense to place large capacity extinguishers, like the one shown here, in engineering spaces.

In this event the crew used a portable dry chemical extinguisher, which while effective, contaminated the area with this agent (the engine was running, and afterward dry chemical residue was found in the air filter).  Dry chemical agents, which commonly include sodium or potassium bicarbonate, or ammonium polyphosphate, which are the  familiar white powder, used in class BC extinguishers, can have a detrimental effect on mechanical and electrical equipment, particularly if ingested by a running engine, or if used on or near sensitive electronics.   Monoammonium phosphate, commonly used in extinguishers with an otherwise desirable ABC rating, it is a pale yellow color, is especially corrosive, particularly if exposed to water or even high humidity.  Furthermore, the manner in which this agent works involves the powdered agent melting to smother the flames, which makes clean up especially difficult. 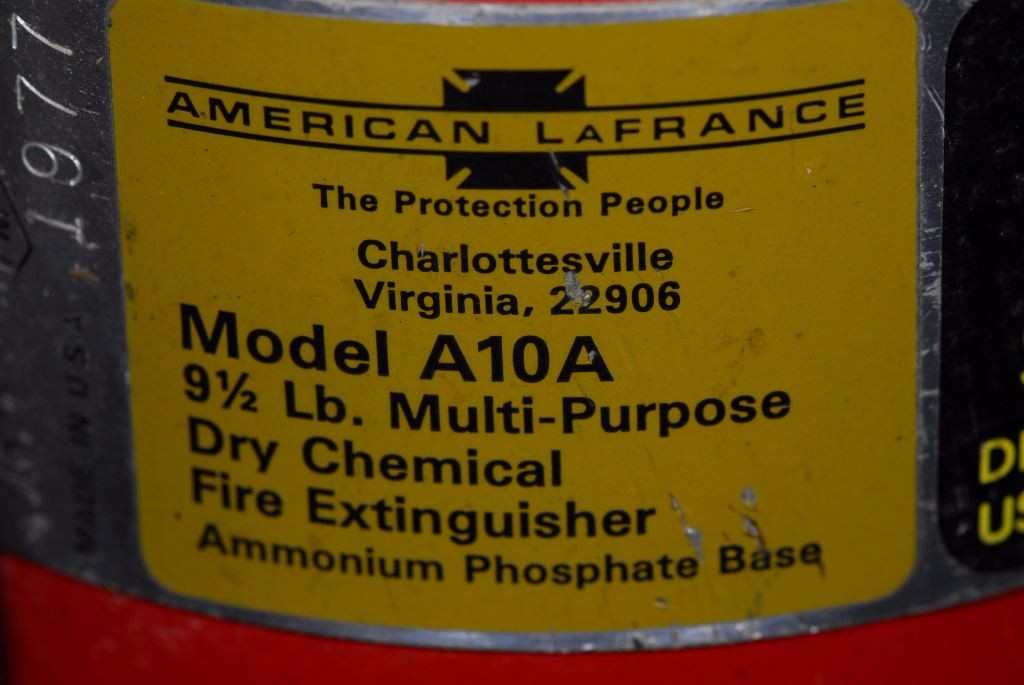 Dry chemical extinguishers, while effective, can cause significant damage to the equipment on which they are used.  In some cases the agent is corrosive, or it melts on contact with hot surfaces.

A gaseous fire extinguisher, on the other hand, like the permanent units installed in engine rooms, relies on a clean agent, one that leaves no residue and will not harm engines, machinery, electrical and electronic equipment when discharged nearby, or even directly onto them.  These are especially effective on small electrical fires of the type that occur behind helm consoles, in electrical panels and engine rooms. 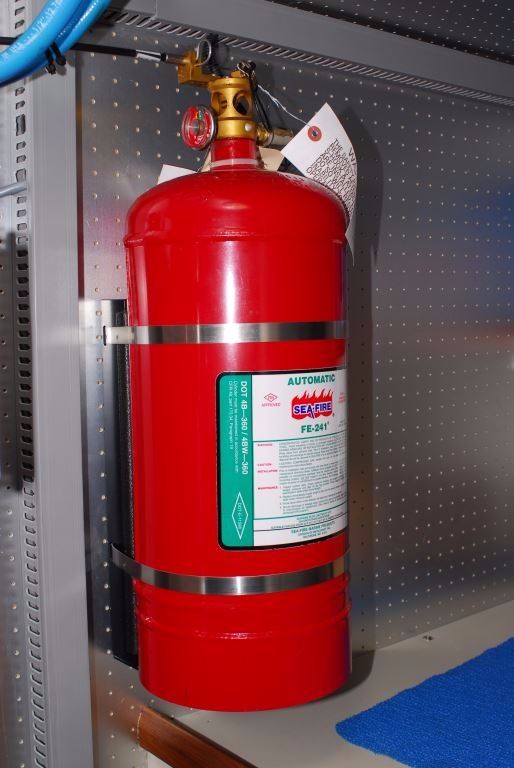 Fixed, automatic fire extinguishers like the one shown here are a veritable necessity in engineering spaces (they are required for ABYC compliance).  They do, however, have a weakness, they will not trigger automatically until the nozzle temperature reaches 175° F.

Portable clean agent extinguishers are available in a variety of agents and sizes, including FM 200, FE-36, Halotron and CO2, in everything from 1.5 lb (this is very small, and is designed for light aircraft and automobiles), up to 20 lbs.  Ideally, one should be installed just outside the engine room, and another in or near the pilothouse.  If your vessel isn’t equipped with one, and most aren’t, consider adding at least one and preferably two for use in electrical and machinery spaces.  While these extinguishers are more expensive than their dry chemical counterparts, the damage they can help prevent will more than pay for the additional cost. 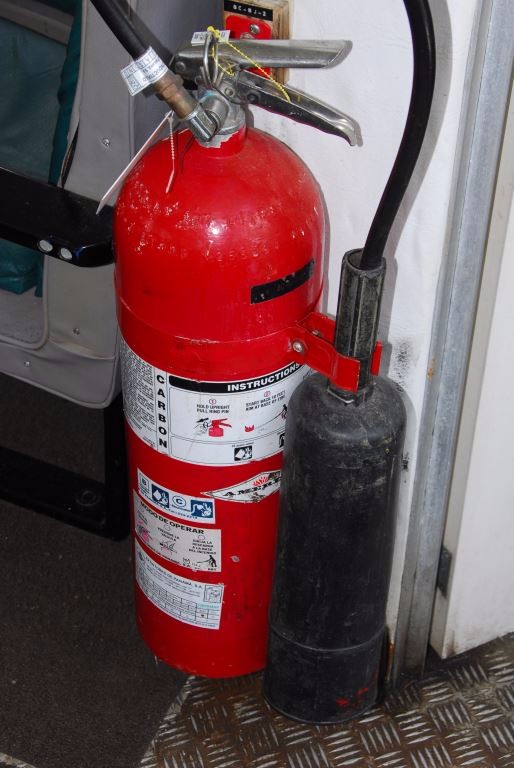 Clean agent extinguishers are available in several varieties, including the one shown here, which is carbon dioxide.

A: Wood, paper, cloth, trash and other ordinary materials.

B: Gasoline, diesel fuel, oil, paint and other flammable liquids.

C: Live electrical equipment [once the electricity is removed, these fires typically become class A, ideally electricity should be shut off before fighting the fire].

The suffix Roman numerals used with marine fire extinguishers, such as B-I or B-II, represent the relative extinguisher capacity, the larger the number the greater the content.  Sizes I and II are the most common for recreational craft, while size III are found aboard larger and commercial vessels. 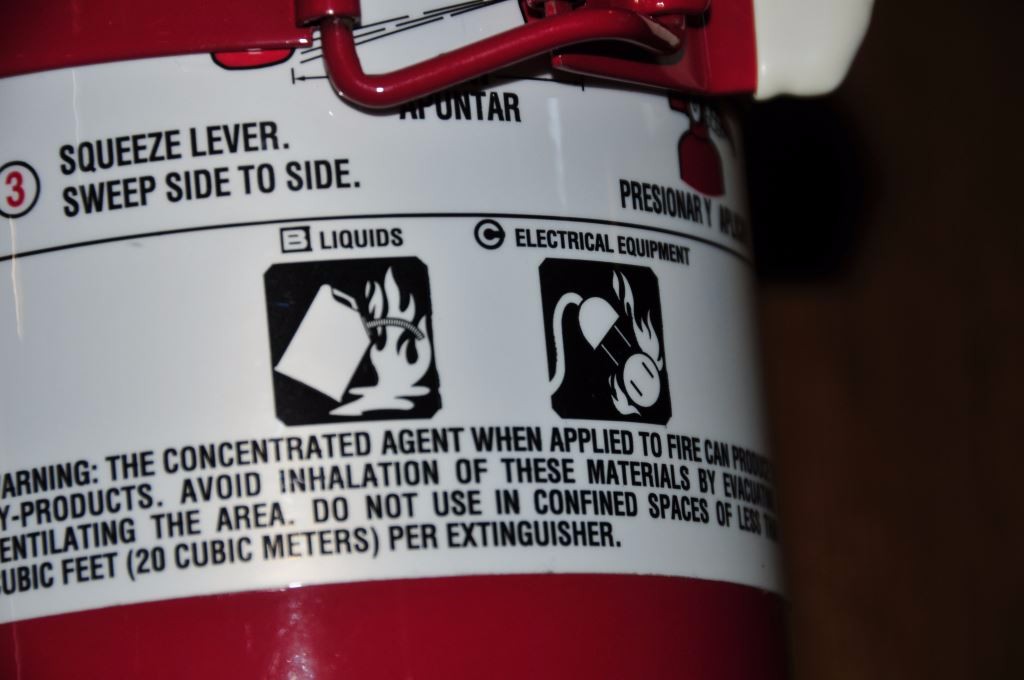 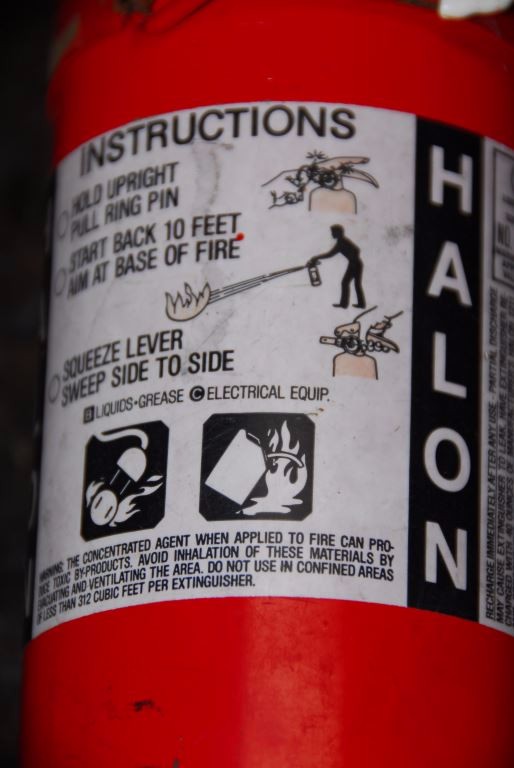 Many vessel owners give little thought to the types of fires that may occur aboard a vessel, commonly classified as A, B and C (as well as others), and the types of extinguishers that are needed to fight these fires.

The US Coast Guard requirements for fire extinguisher are, in my opinion, woefully inadequate and should be considered strictly an absolute minimum.

As one can see, a vessel of 65 feet is compliant with just one portable B-II, and one fixed fire extinguisher (again, I don’t recommend following this guideline).  Conversely, my preference is for a portable unit in every cabin and, generally speaking, no fire extinguisher should be more than three steps away.