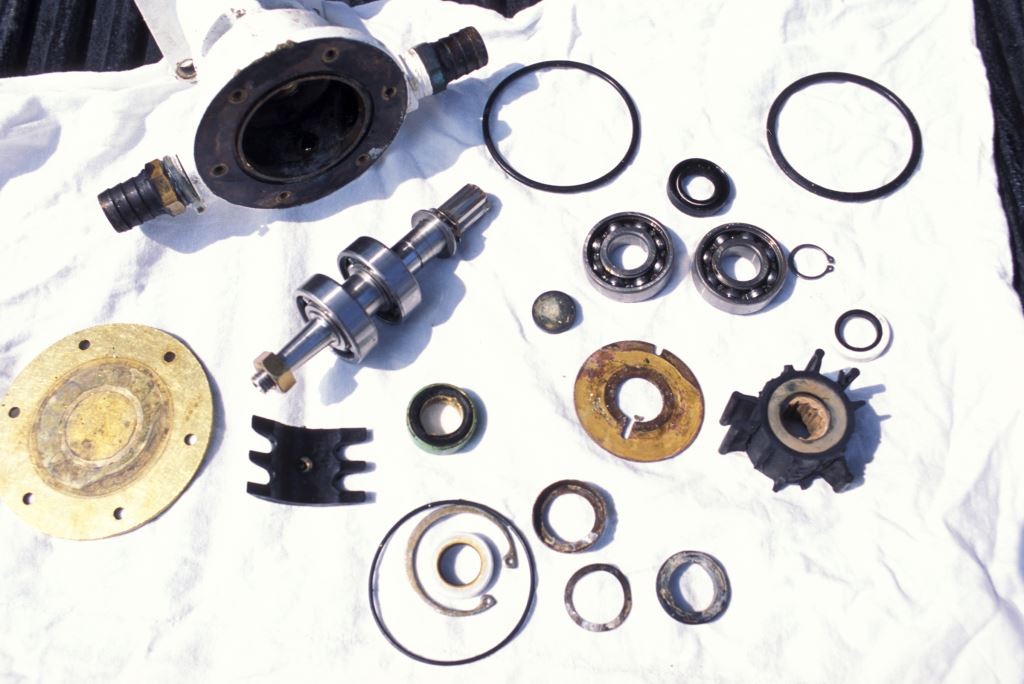 Not long ago I was involved in a pre-purchase inspection aboard a 70 foot vessel.  As is often the case, the boat was a hive of activity with a host of participants, many of whom had flown in from out of town, including the buyers, buyer’s friend,  buyer’s broker, selling broker, captain, mate, hull surveyor, engine surveyor and me.

When I arrived early that morning I was surprised to see two large boxes of donuts, and containers of coffee, along with energy bars and packages of snack mix, all set up in the galley.  The refrigerator was stocked with water and Gatorade.  “Wow”, I thought, “someone is on the ball”, I assumed it was the vessel owner.  The sea trial would last three or four hours.  I’d had breakfast, and a doughnut, and was prepared to miss lunch, that’s not unusual on the day of the sea trial; I keep energy bars in my camera bag for just this reason.  About an hour before getting underway one of the brokers approached me to take my lunch order, he had offered to go to Publix (they have great, fast, deli departments) to get sandwiches for everyone.  It turns out he was the one who’d brought the donuts, coffee and snacks, and I commended him for doing so.  He refused to take money when it was offered. 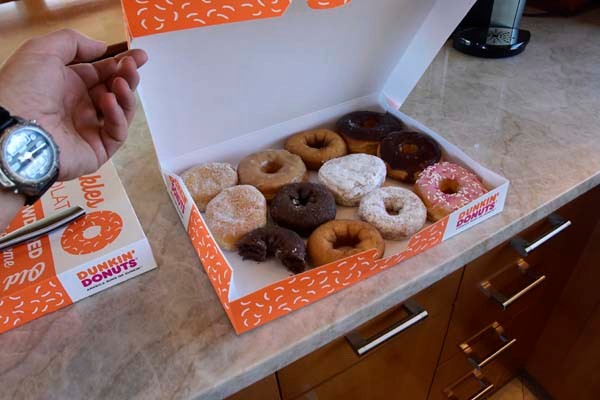 Unfortunately gestures such as this are the exception, often by 2PM everyone is starving and scrounging around for stale crackers, and yet it’s so easy, and a comparatively inexpensive service to provide, particularly when one considers the return.  Of course brokers aren’t required to buy anyone lunch, however, I’d argue it’s in their best interest to do so, or at least make arrangements to provide it even if it’s at the expense of those consuming it, hungry people, buyers and industry pro’s alike, aren’t happy people, and that’s not good for the sale process.  Part of a broker’s job is to facilitate the sale and see to details, large and small. The two brokers involved in this project stood to make tens of thousands of dollars in commissions, while the cost of breakfast and lunch for everyone aboard was almost certainly less than $100, and required no more than an hour of their time.  I’d say it was a good investment; the sale went through.  Did doughnuts and lunch make the difference?  We’ll never know for sure, but it certainly didn’t hurt.

This month’s eMagazine feature article covers the subject of raw water pumps.  I hope you find it both interesting and useful. 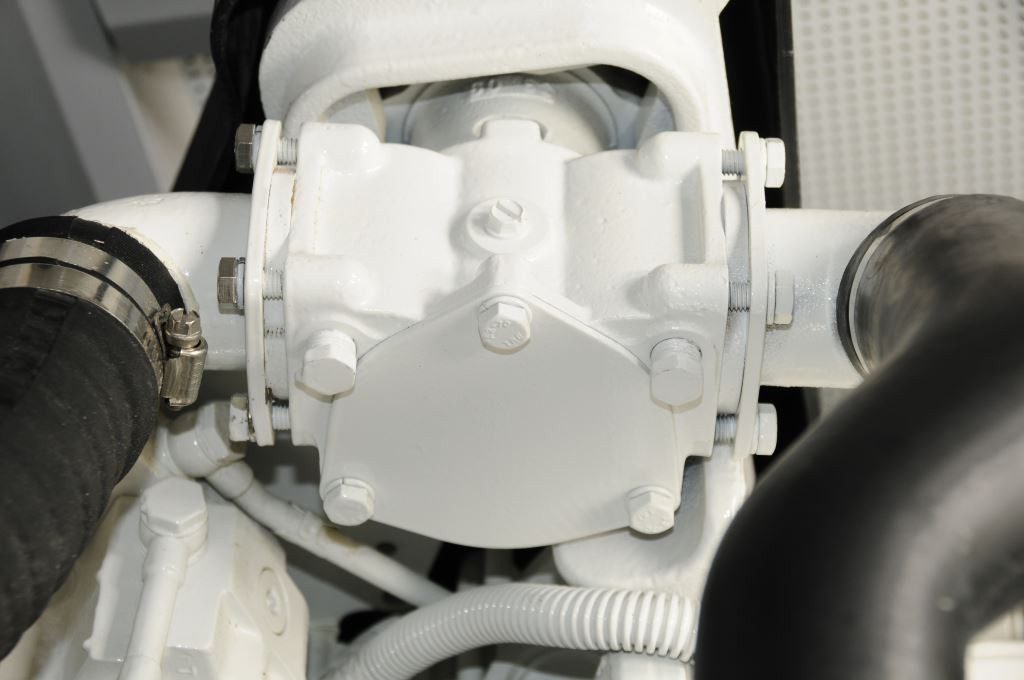 Raw water pumps are simple and can offer long, trouble-free service provided they are properly maintained.

The design is simple; it has only a handful of parts and only two that move during regular operation.  It completes millions of revolutions during its life and most vessel operators never give it a second thought, until it fails.  Without it, your engine or genset is nothing more than ballast.  Figured it out yet?  I’m referring, of course, to your engine’s raw water pump.  This is the device that draws raw water and supplies it to the engine or generator, and then exhaust system, for cooling purposes.

The basic raw water pump design hasn’t changed much in close to a century.  A flexible impeller turns within an eccentrically-shaped housing.  As each impeller blade passes the cam, essentially a ‘bump’ within the pump, it is deformed or compressed.  This compressing action causes the volume between each two blades to change rapidly, which in turn causes suction and thus water movement.  This is referred to as a variable volume displacement-type pump.  It’s a brilliant yet simple design.  Much like a propeller shaft bearing, the impeller is lubricated, as it spins within the pump housing, by nothing more than raw water, and this is its greatest weakness. 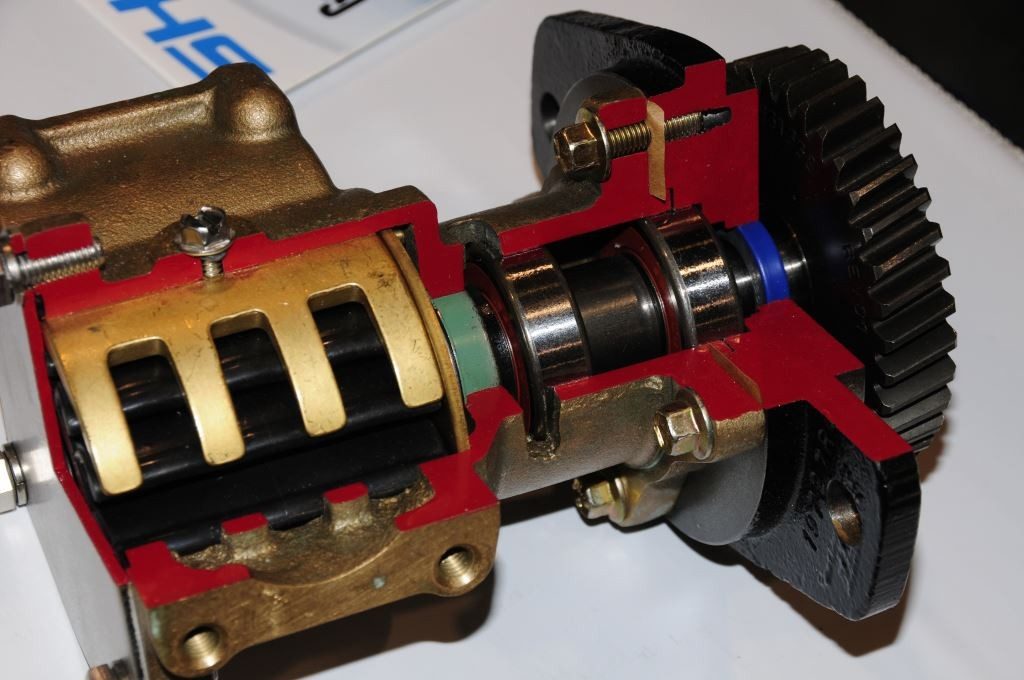 Bearing races, the silver rings, along with the cam (as well as the retainer screw and washer), fork-like object on the left, can be seen in this cut-away of a pump.  Most gear-driven pumps like this utilize a void between the oil and raw water seals, which includes a telltale or weep hole on the bottom side, which will allow oil or water to exit if one of these seals leaks, alerting the user to a problem, and preventing water from entering the crankcase

Nearly all raw water pump impellers are made of neoprene, a synthetic rubber that possesses the twin attributes of resiliency and abrasion resistance.  However, as many have discovered, they are far from indestructible.  The average neoprene raw water pump impeller can be expected to last several hundred hours, and sometimes more.  The prudent vessel operator will, however, replace his or her raw water pump impeller seasonally or approximately every 250 hours, whichever comes first.  In my experience, barring catastrophic events such as severe intake clogs, impellers that are replaced at this interval almost never suffer failures. 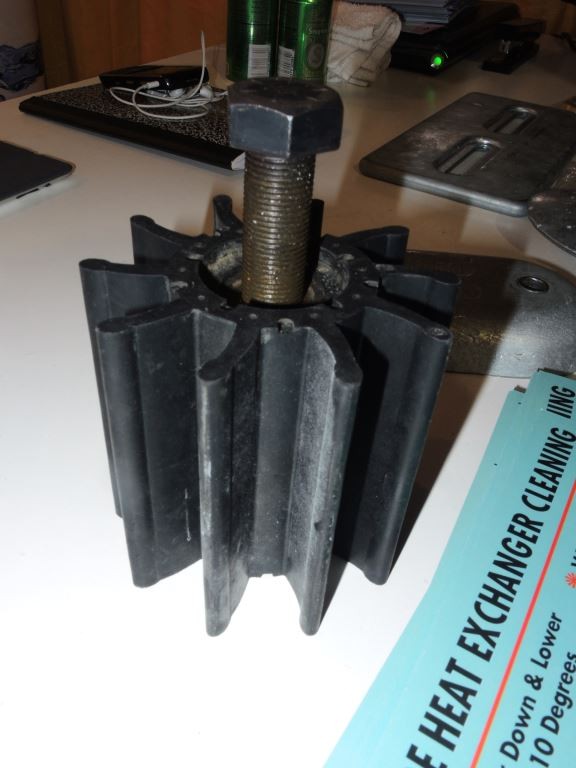 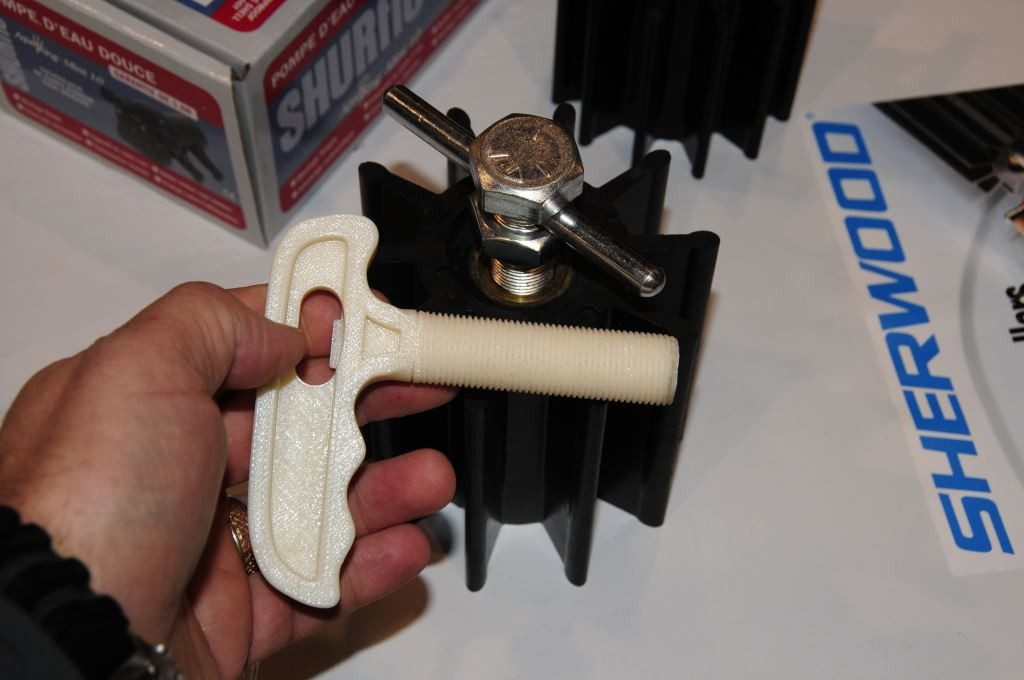 For impellers that are equipped with threads, jacking screws can be used for removal.  These are especially valuable where clearance does not allow for an impeller puller.

Impellers can be notoriously difficult to remove from pump housings, particularly when they haven’t been replaced regularly (another reason to carry out regular replacement).  When undertaking impeller removal, avoid the temptation to use a screwdriver(s) as a pry bar, as the only surface against which you can pry is the pump body, and more specifically the cover plate gasket surface.  Most raw water pumps are made of manganese bronze, and thus they are easily deformed by this action, which will only lead to chronic water and/or air leakage upon reassembly. 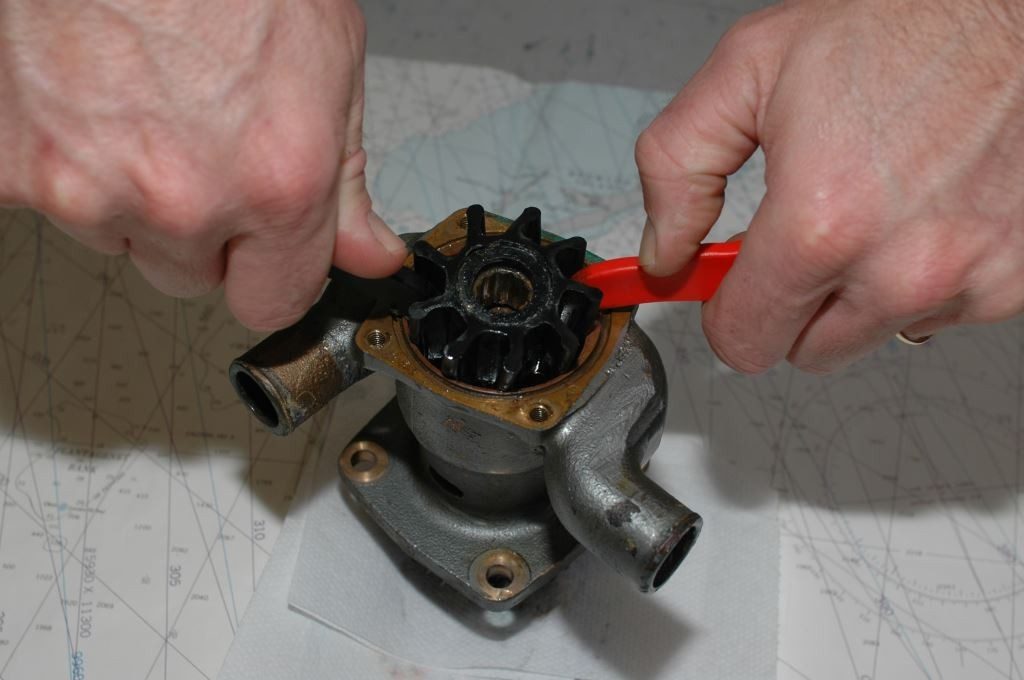 Never use a screw driver or other hard object to pry out an impeller.  Plastic pry bars, on the other hand, may be used without concern for causing damage.

Alternative removal methods include the use of a proprietary impeller puller (these require significant “head” room, space between the impeller and the next closest object, often some part of the engine, starter, fuel pump etc), plastic pry bars, or a hose pliers (these look similar to a needle nose pliers except the end is shaped like that of your thumb and forefinger when making the “OK” symbol).  If your impeller has internal threads, it can be removed with a proprietary jacking tool, available from the impeller manufacturer. 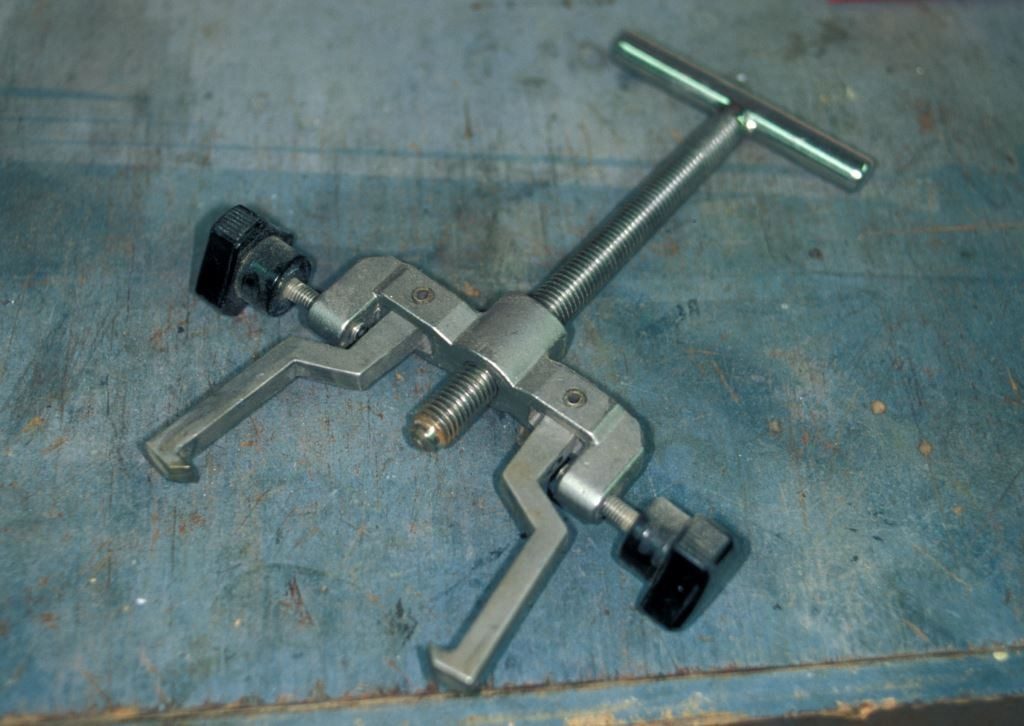 Dedicated impeller pullers are available in several sizes, they will ease removal considerably provided there’s room to use them.

If clearance is severely limited, it may actually be easier to remove the pump in order to replace the impeller.  If you are in this camp, you’ll need a replacement gasket for the pump base if it’s gear-driven.  As an aside, gear driven pumps include two shaft seals, one water, the other oil, making it possible for these pumps to leak either, or both fluids.  The most common cause of such leakage on the seawater side is shaft corrosion (it’s an alloy of stainless steel and is therefore susceptible to crevice corrosion, especially when not used for extended periods) and simple seal wear; while on the oil side the seal also wears out, or hardens and cracks as a result of age and exposure to hot oil and the contaminates suspended within. 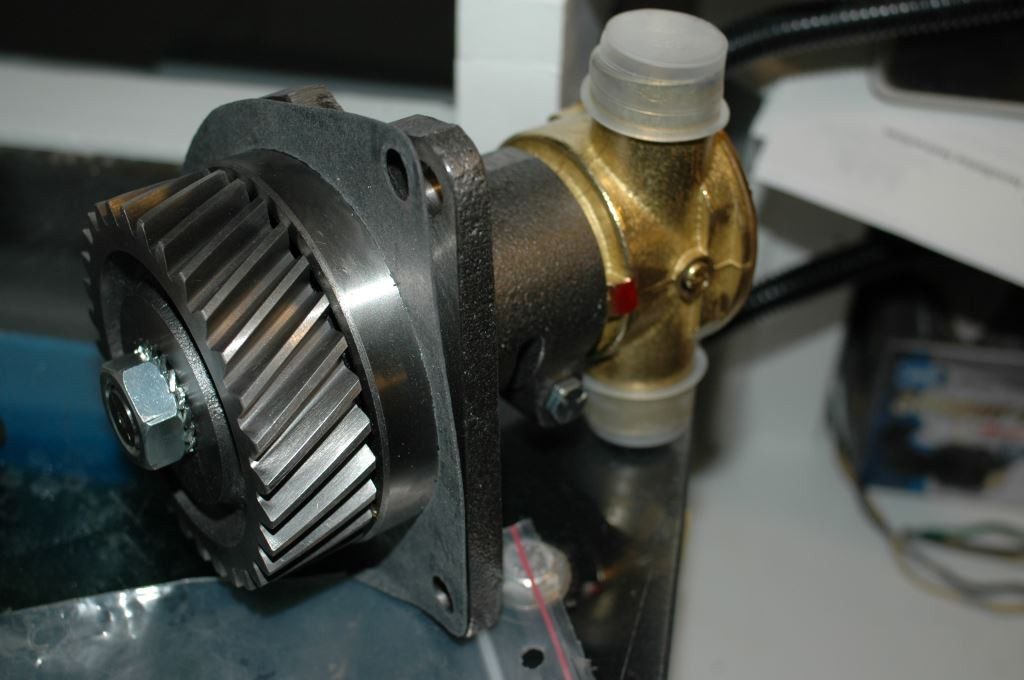 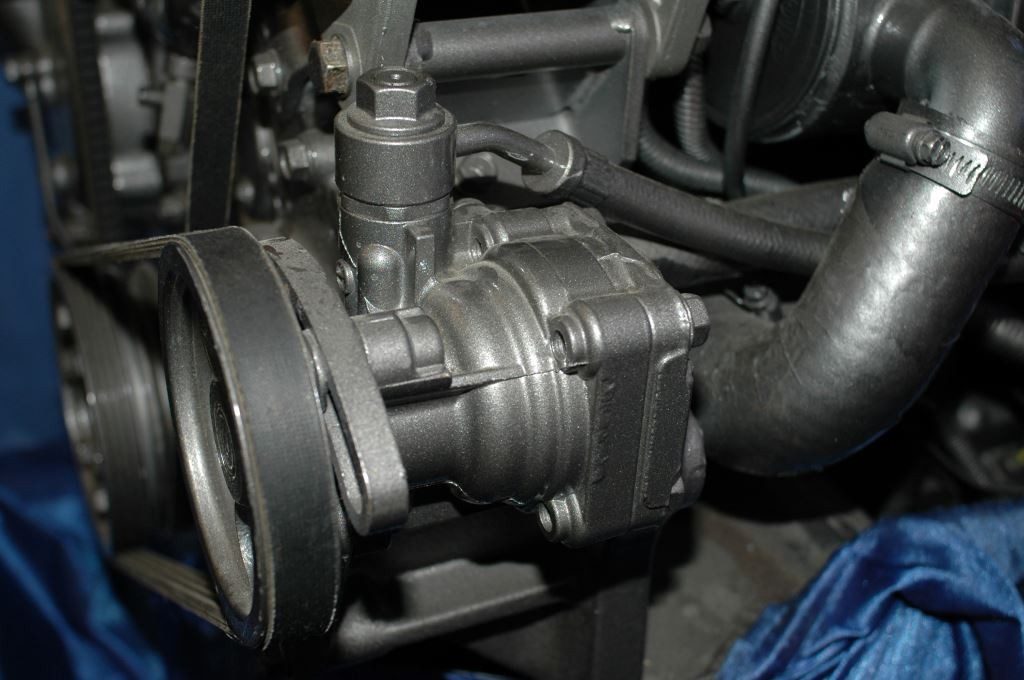 Pumps are either gear, top, or belt, above, driven.  The latter are easier to remove.  When removing the former, be sure to have a replacement gasket on hand.

In addition to the impeller, raw water pumps contain other components that may require periodic service, repair or replacement.  The pump’s cover plate and cam eventually wear out as a result of continuous impeller abrasion.  Because the wear is usually uniform and gradual, it’s often difficult to detect, especially to the uninitiated eye.  If any difference can be discerned between the existing cam and a replacement, it should be replaced.  Most are retained by a screw located on the outside of the pump.  When removing it be careful to not to drop the screw, or lose the sealing washer located under its head.  If any surface irregularities can be felt in the the cover plate, against which the impeller rides, it too should be replaced. 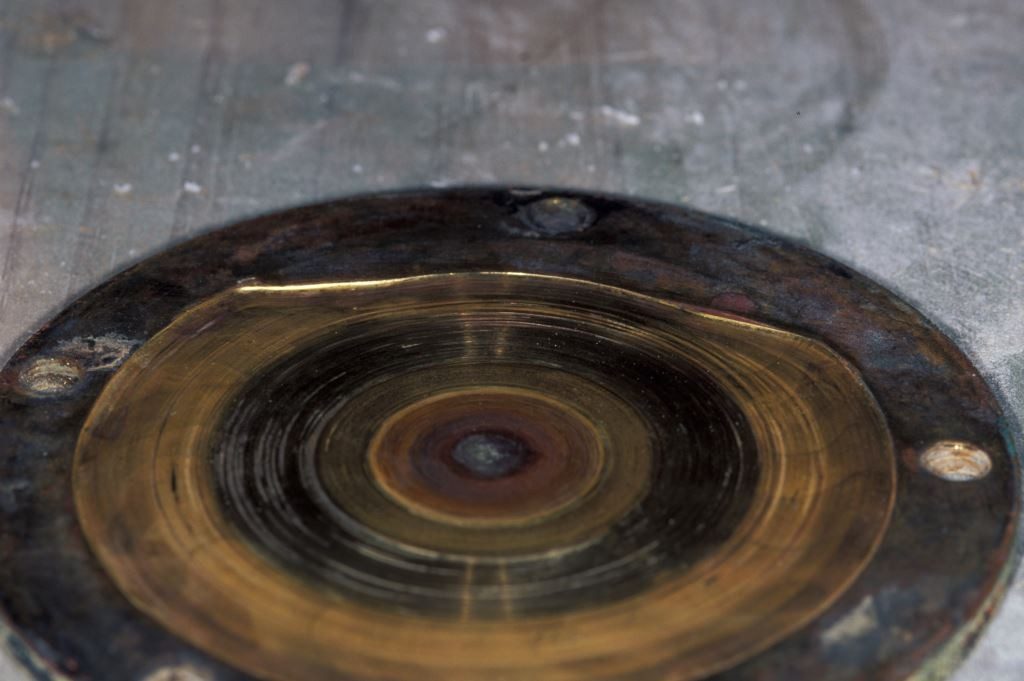 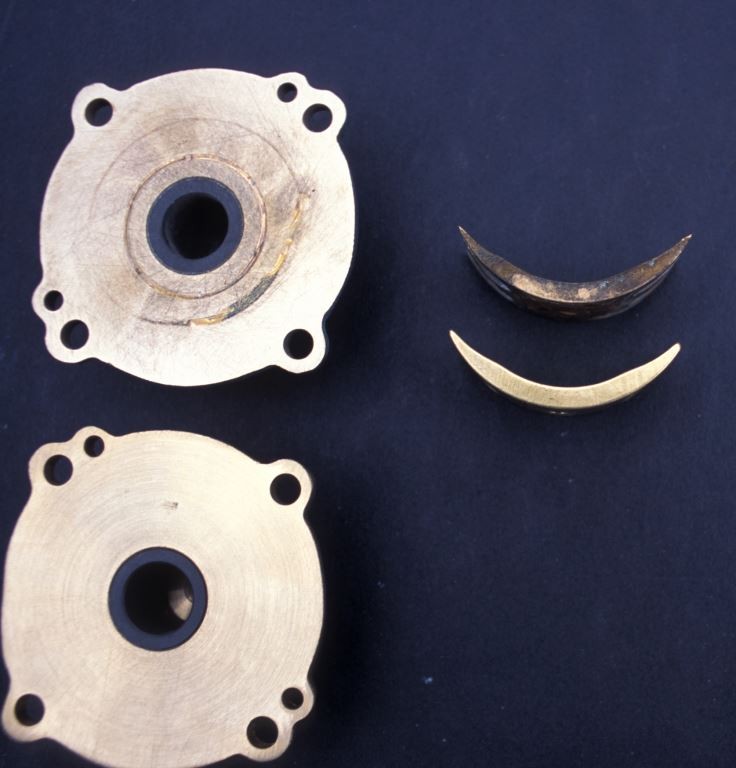 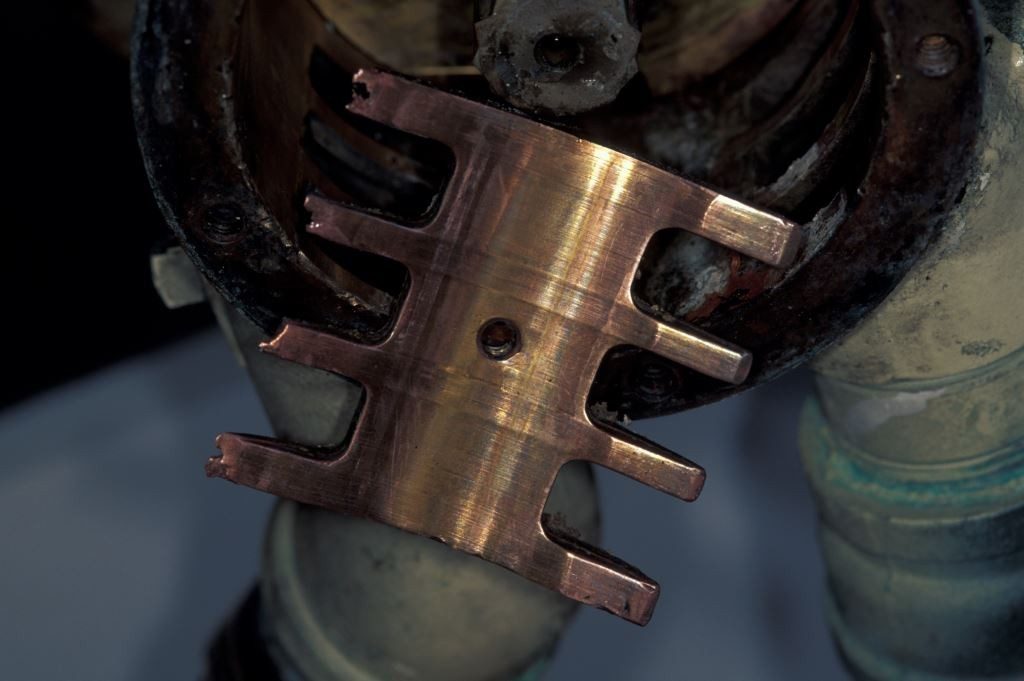 Determining the wear level of a cover plate and cam, particularly the latter, can be difficult until compared to replacements.

Accessing the impeller or replacing it will almost always require replacement of the cover plate gasket or O ring.  In most cases these will be damaged or over-compressed after the cover is removed; they should not be reused.  Having said that, installing them with a light coating of Teflon grease will improve the water and air tight integrity of the cover plate, while possibly preserving the gasket or O ring for reuse in an emergency. 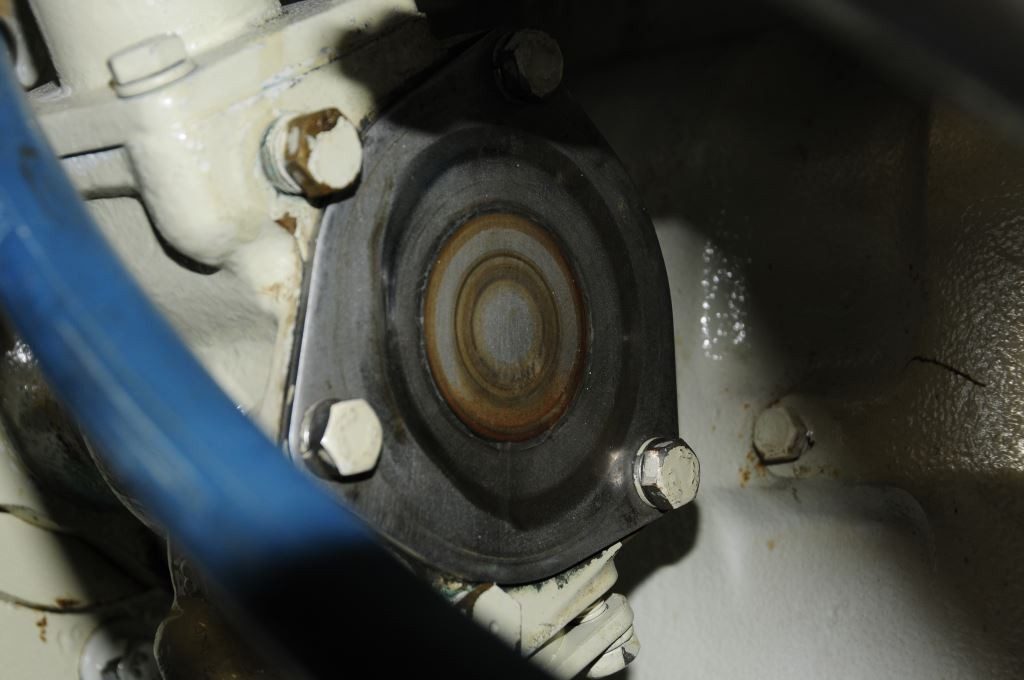 Most pump cover plates can be turned over, as this one has, for a second life provided there is no, or little, embossed lettering on the surface against which the impeller will turn.

Prior to reassembly the shaft should be thoroughly greased with a viscous, water-resistant lubricant such as Lubrimatic Marine Trailer Wheel Bearing Grease (avoid light grease such as Teflon, silicone or white lithium, these wash off too easily).  Doing so will prevent the impeller from becoming seized to the shaft.   The impeller itself should be lubricated with diluted liquid dishwashing detergent, which will make it easier to install, while providing a slick surface for the blades to turn against until water begins flowing.  The soap will also help the pump establish an initial prime.  For larger impellers it may be necessary to compress the blades in order to ease installation; this can be accomplished using a large wire tie, which can be cut or slipped off as the impeller is pushed into the housing.  Don’t worry about getting the blades in the correct rotational orientation; they will flop into place with the first revolution.  However, avoid installing an impeller unless you intend to run the engine shortly thereafter, i.e. don’t install an impeller during fall winterization. 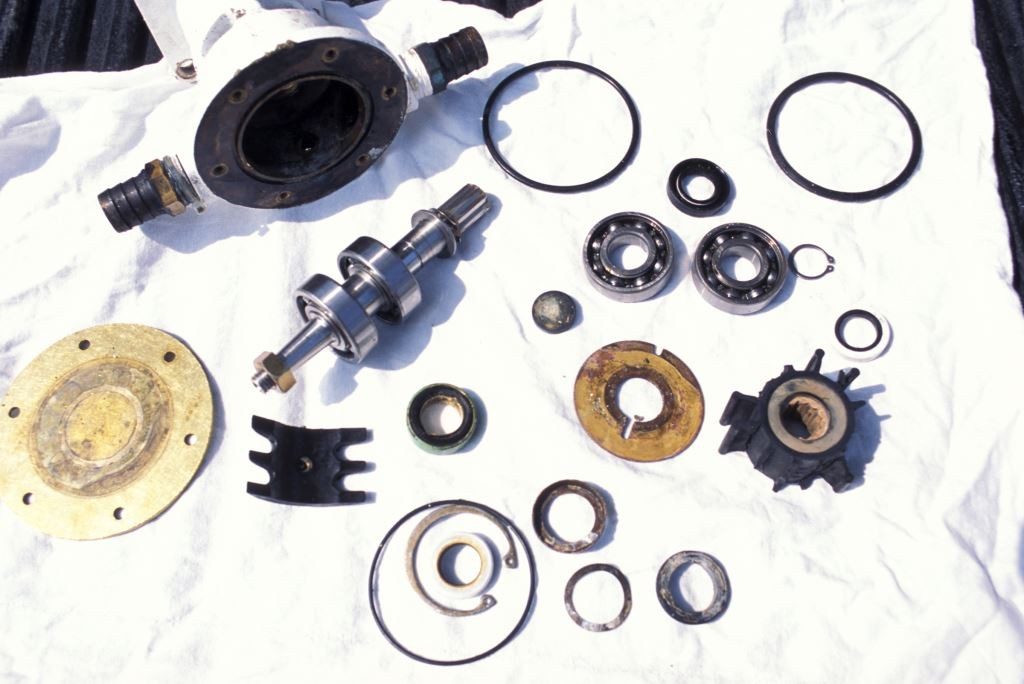 Other raw water pump potential failure components include seals, bearings and shafts, all of which can be replaced (unless the labor is yours, and thus free, at some point it becomes less expensive and less aggravating to replace the pump in its entirety).  Many opt to carry a complete spare pump that can be installed comparatively quickly.  The pump that has been removed can then be repaired or rebuilt once you’ve reached your destination.    Remember, avoid installing the impeller in a rebuilt pump until it’s about to be installed.