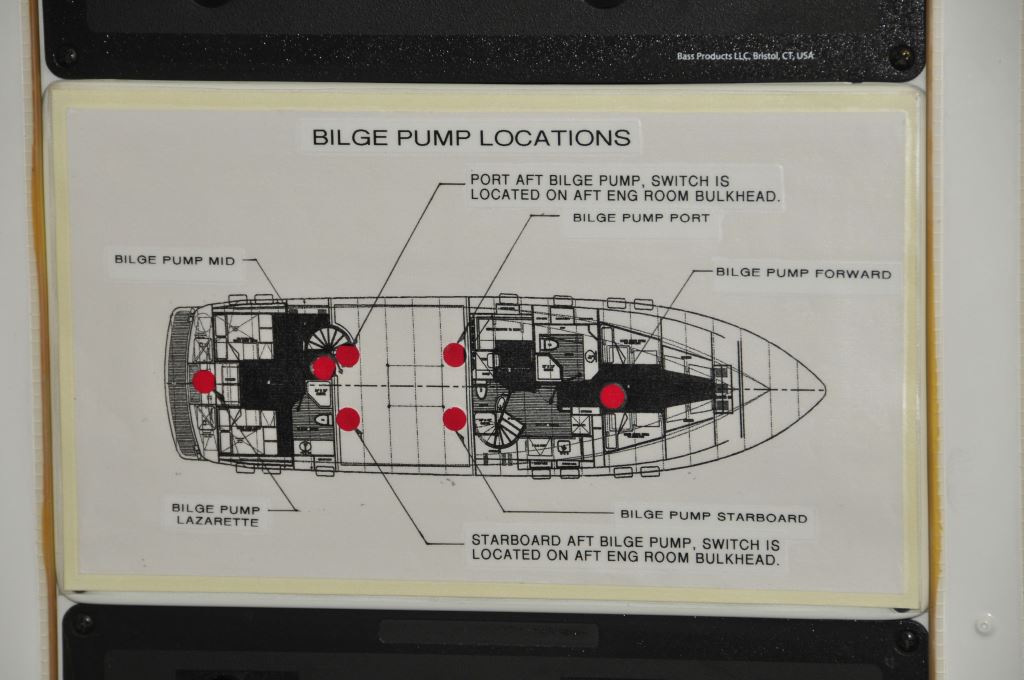 My first impression of Tim Caruso was, “Uh oh, another mechanic prima donna, cranky, cantankerous and always has to get his way”.  Needless to say, I was wrong, while Tim could be cranky and impatient, he was anything but a prima donna; as the familiar saying goes, Tim’s forgotten more about diesel engines than most experts will ever know.

I’ve known and worked with Tim for over a decade, but it took years of interaction to work my way into his inner circle, and eventually achieve the privilege of having him consider me his friend.

Tim truly set the standard where engine surveyors were concerned, and after working with him a few times I compared, and continue to compare, every one of them to him, few live up to his standards; in reality there are none, and most wouldn’t have been qualified to carry his tools.  Thorough doesn’t begin to describe his approach toward engine evaluations, he often spent two days aboard, brought a slew of tools and always his lunch box, packed by his wife Kelli, and he typically arrived well before everyone else.  After I’d arrive and exchange pleasantries, he’d move closer and in a low voice say, “Here’s what you should know”, and then proceed to give me what he’d learned thus far about the boat, the owner, the broker etc.  Unlike many engine surveyors, Tim took in the whole picture, he never limited his observations to the engine alone, if he saw a rust streak coming from a through hull, he’d point it out to me, and his communication skills and bedside manner were beyond reproach, always making the client feel at ease and in the know.  Tim took the time to explain issues to them, as well as giving them a guided engine room tour; which could last two hours, and for which he’d prepare by marking all key equipment and components with blue tape and his hand-written labels.

On one occasion he and I were working on a project in Mexico, it was early on in our relationship, we’d flown down together and were there for several days.  Each day, at lunch, a staff member of our host would drive us to a local cantina and drop us off so we could eat, and over those meals, and after hours dinners (and only dinners, Tim didn’t drink) I gained a full appreciation for how Tim’s persona was formed, he’d been through the proverbial school of hard knocks, working initially in the Merchant Marine, and as the low man, doing the dirtiest jobs, including jack hammering concrete ballast out of a chain locker, while wearing little in the way of protective gear.  He eventually went to work for a Caterpillar dealer, going through CAT’s rigorous training program, and then opened his own CAT authorized service facility, Marine Diesel Analysts in Stuart, Florida.

Between in-person meetings in engine rooms, Tim and I spoke often, he was an invaluable resource.  While his body of engine and machinery knowledge was vast, he was a Caterpillar man, he liked to say he bled yellow (his email address was “catchaser”).

When he learned of my passion for wildlife photography, he offered to take me on his airboat into the Everglades; I accepted without hesitation (you can see images from one of those trips here).  We spent the day cruising the region, he knew the area intimately, having explored it since boyhood; he never looked at a map, GPS or compass the entire day.  After he became ill, these trips were no longer possible, he simply didn’t have the strength, however, late last year he called me and simply said, “I’m feeling good.  You wanna do an airboat trip?”  Without hesitation I said “yes!” and quickly cleared my schedule.  It was a memorable day, and while it didn’t go as planned, I’m thankful for every minute of it, you can read about it here airboat.

Tim lost his battle with Cancer on March 28th.  I visited him a couple of days before in his hospice room, and I told his wife, “There are very few men who aren’t relatives, about whom I’d say this, but I love that man”.   She smiled and said, “He said the same thing about you”.

Tim, you will be sorely missed, rest diesel peace my friend. 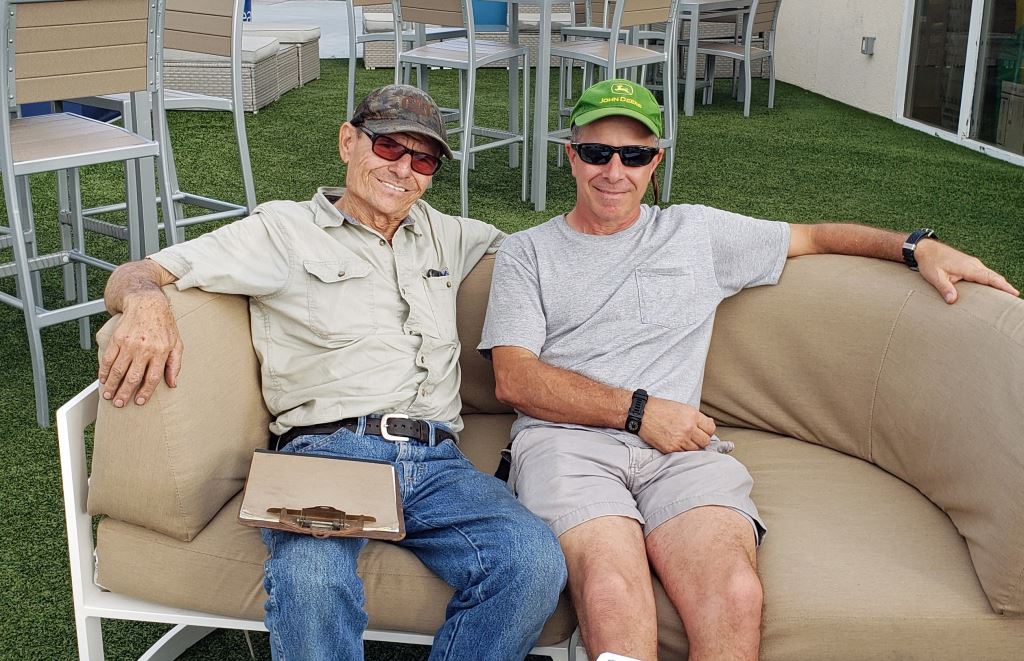 This month’s eMagazine feature article covers the subject of high water alarms, I hope you find it both interesting and useful. 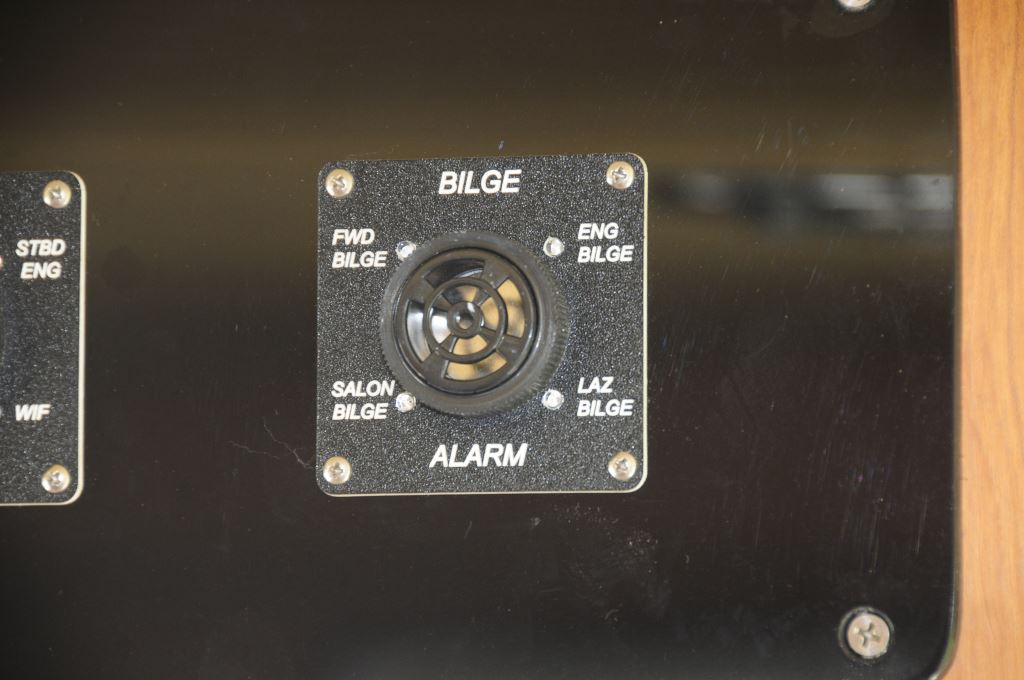 This high water alarm annunciator is well-designed, it includes a single audible horn, and indicator lights to show which compartment is flooding.

In 2017, a story about the sinking of a 56-foot center cockpit sloop made the rounds in the offshore community.  I read it with great interest, and like every tale of a foundering, I reflected on the lessons that could be learned by vessel operators.

Several details struck me, the most important being the high-water alarm, if present, didn’t sound (this is a requirement for ABYC compliance).  High-water alarms are one of the first, simplest and most reliable lines of defense in such a scenario.  And yet, many of the alarm float switches I encounter are located far too high; the intention of such an alarm is to give as much notice as possible to the crew, about water accumulation that is above “normal”; for some vessels “normal” may be no water at all, while in other cases it may be several inches.  The problem with normally wet bilges is you don’t immediately know if there’s an abnormal amount of water entry unless you have a bilge pump cycle counter, which is secondary in value only to a high-water alarm. 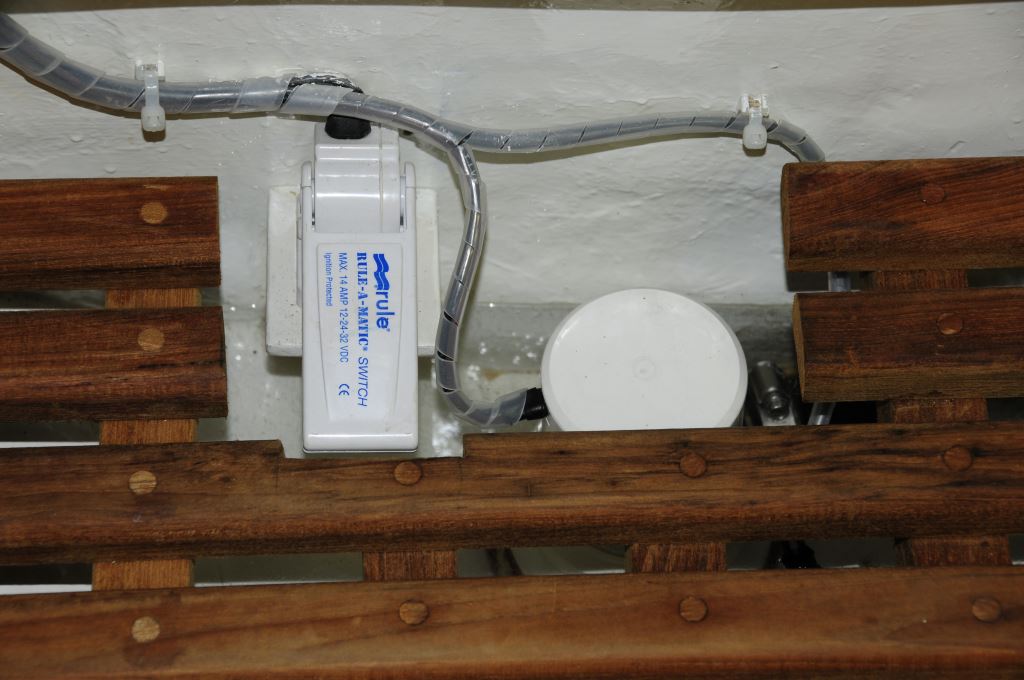 This high water alarm switch is located above the bilge pump, it’s too high and in this case vulnerable to being stepped on.

Alarm switches should be mounted no more than 2-inches above bilge pump float switches (I’ve seen them as many as 18-inches above the primary pump, well above the level of critical equipment, including batteries and the bottom of the engine, I sometimes refer to those as, “it’s time to deploy the life raft” alarms).  Additionally, whenever a bilge pump runs, it should be accompanied by the illumination of an indicator light, or monitoring system display, one that can be seen at the helm, nav station, or in the cockpit. 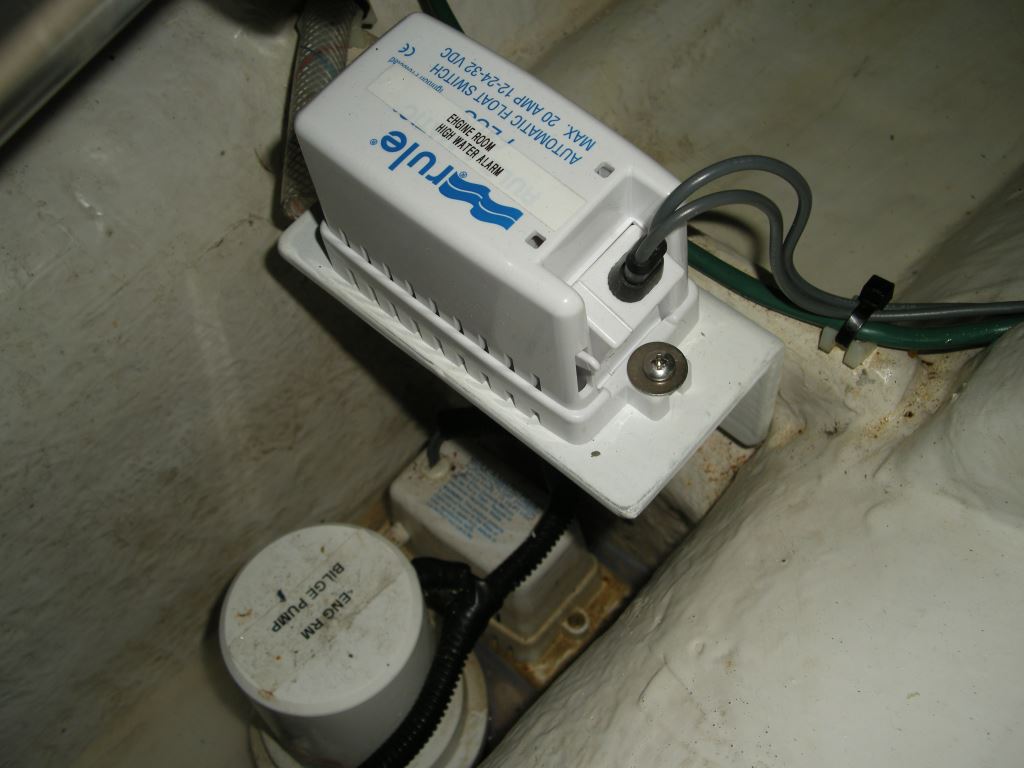 High water alarm switches must be located so that they provide the earliest possible indication of flooding; that usually means no more than just a couple of inches above the primary pump’s switch.  The one shown here is, once again, too high.

Some vessels include an audible indicator as well, not necessarily an alarm, but a chirp or soft buzzer, something that will tell the crew know the pump is running without waking the off watch, although high water alarms should be ear-splitting and impossible to ignore or sleep through. 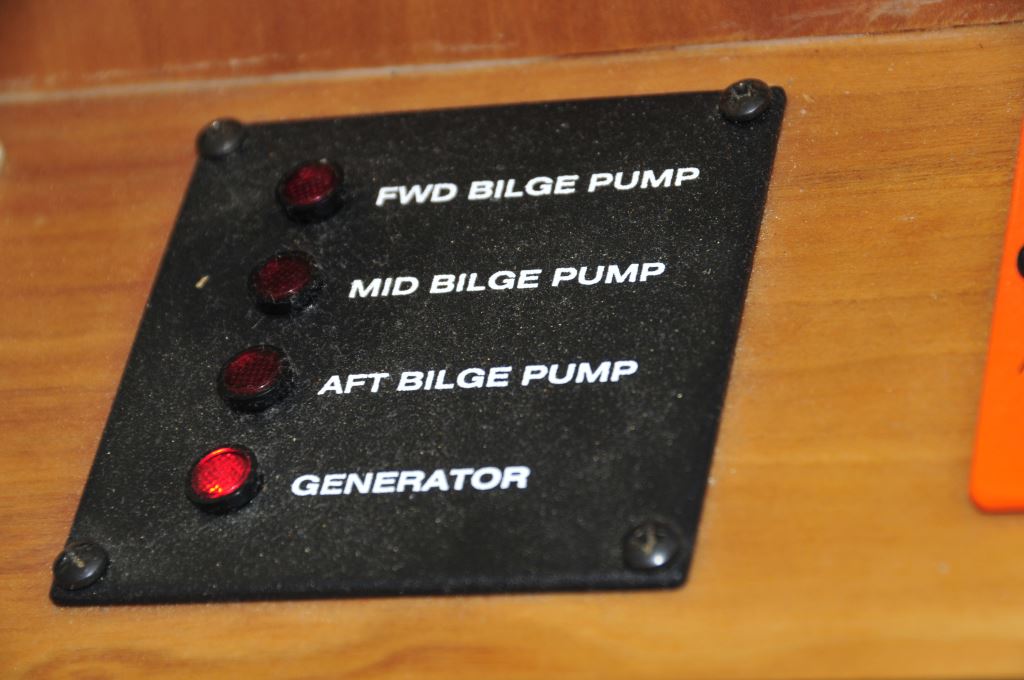 A light should illuminate every time a bilge pump runs.

Bilge pump capacity is like fire extinguishers, you never can have too much. There should be a submersible pump in each bilge compartment, and overall capacity should be no less, and preferably more, than 100 gallons per hour per overall foot of vessel length, i.e. a 45-foot vessel should have at least 4,500 gallons per hour worth of pump capacity.  Pumps, float switches and high-water alarms can only be properly tested by one means, filling bilges with water and observing and timing the results, as pumps that run do not necessarily pump water.  In fact, I’ve encountered more than a few high-capacity submersible pumps that run, and even create turbulence in the water around them, and yet they pump no water, often because they are unable to overcome the lift needed to move water overboard, or because they are pumping against a stuck check valve. 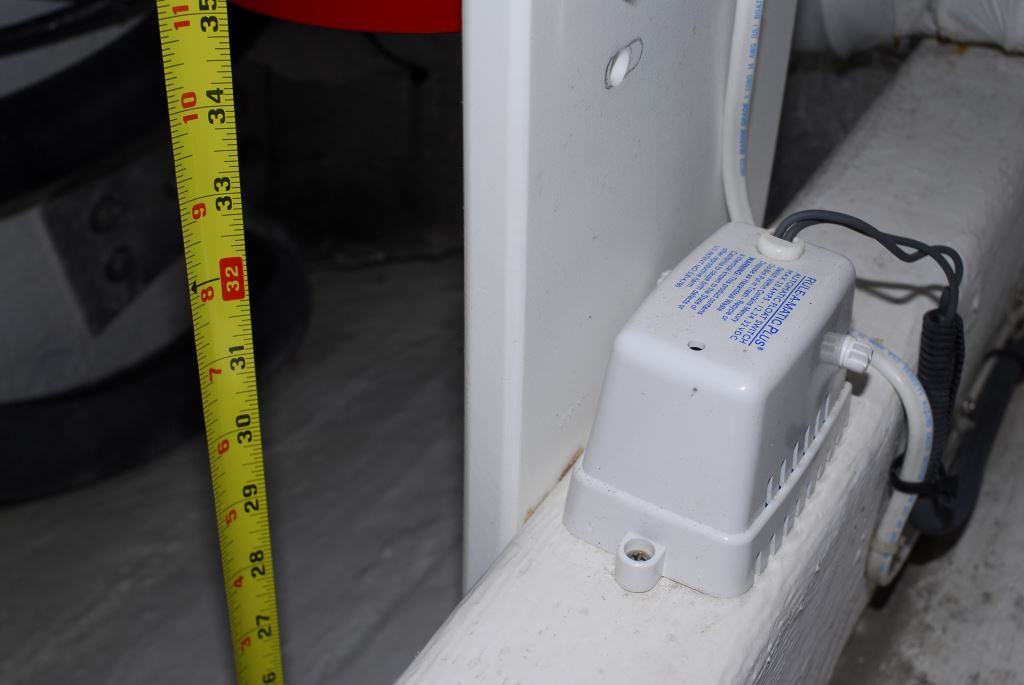 This high water alarm, located on an engine bed stringer, is over 30-inches above the bilge pump, and above the bottom of the engine.

The crew of the stricken vessel searched for the source of the water ingress with no success, so they wisely shut all the below the waterline seacocks.  The owner had posted a diagram showing the location, however, it was noted the font indicating locations was very small.  Not only should this be as clear as possible, each seacock and hull penetration on the chart should be clearly identified, so it’s clear none have been missed in a scenario such as this.

If seacocks are located in less than obvious locations, under berths, or false bottoms in lockers, the exterior of those spaces should be clearly marked to indicate a seacock is hidden within or beneath.  Under no circumstances should it be necessary to use tools to access a seacock.

Bilges should be accessible for inspection.  Hatches that cover important gear or valves should be latched in place, but not screwed down.  Racing vessels often represent some measure of organized chaos below, with a lot of souls, personal gear, vessel gear, and emergency gear layered into every storage space.  Never the less, an effort should be made to keep access to bilge spaces clear and reasonably accessible, reasonably quickly, and this includes keel fasteners. 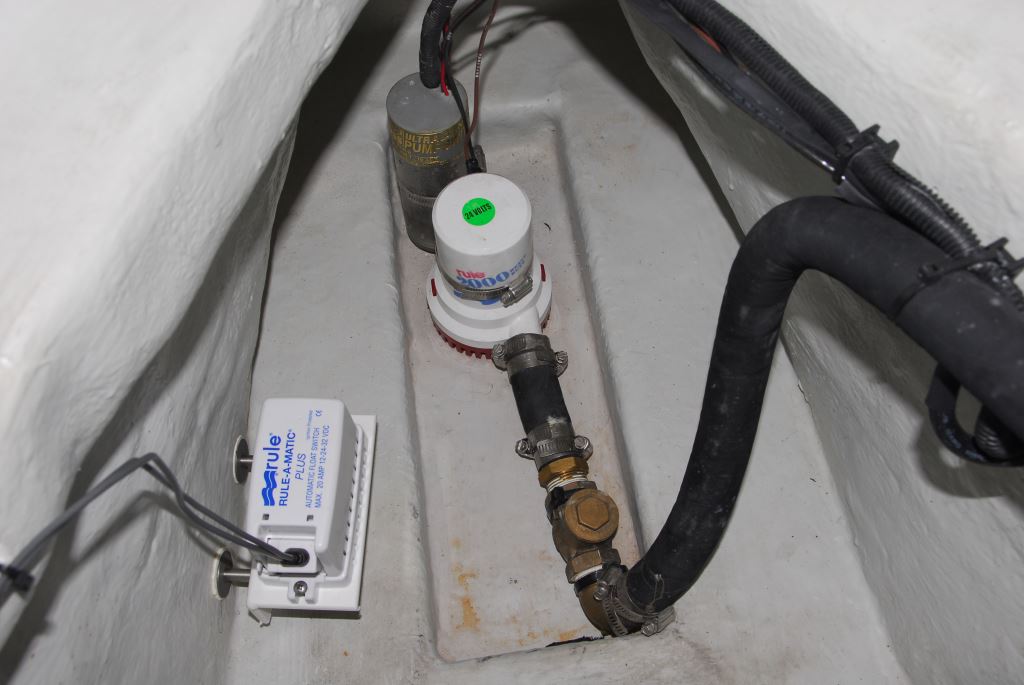 Located only slightly above the switch for the pump, this high water alarm float switch is properly located.

If a vessel begins to take on water after striking an object, it stands to reason that the damage is forward, if not the hull itself then a transducer perhaps.  Regardless, if the ingress cannot be quickly identified, a fothering patch (a large piece of triangular-shaped waterproof fabric with a lanyard at each corner) can buy time while the problem is dealt with.  These are inexpensive and easy to use provided conditions are moderately calm, and in this case they were.

While the likelihood of such an event is thankfully low, it never the less pays to be prepared.  Test your pumps and high-water alarm regularly, and make certain your damage control kit includes materials for temporary repairs, along with a fothering patch.  For more on damage control, see this SDMC eMagazine article, and for more on bilge pump system design, see this article.