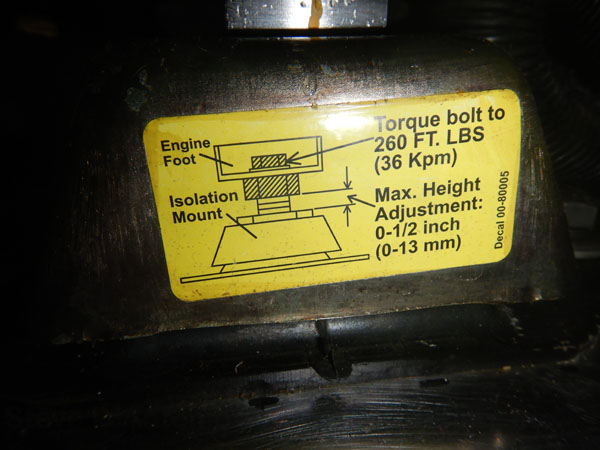 As simple as they are, motor mounts may account for one of the most commonly misunderstood, and improperly installed, components associated with propulsion engines.  It should be remembered, the only connection between the thrust created by the propeller and the vessel, and its motion, is the motor mount.  The vessel is literally being pulled by these mounts, which means the load that is imparted upon them is significant. And thus, proper installation is paramount.

I took the accompanying photo for two reasons.  One, it’s very unusual to see so much useful information applied directly to a motor mount.  Two, the information it conveys is, from a technical perspective, priceless; it’s warning installers not to over-extend the mount.  Over-extension is the leading cause of motor mount stud failure.  If a mount is over-extended, a shim should be installed beneath the mount, elevating it, and thereby reducing the height of the engine bracket, and shortening the extension. Additionally, the placard also alerts installers to the proper torque setting for the securing nut.  More on motor mounts here.

After reading your info on antisiphon valves, I wanted to add one to my Westerbeke 12.5 BTBD generator. The most recent oil analysis suggested traces of sea water intrusion (no obvious change in oil appearance or oil level). A recent cruise tore off 2 blades in a sea water pump after only 50 hours which may have been enough to allow some siphoning through the exhaust elbow. I also considered a leaking seal between sea water pump and the engine.

I replaced the pump and exhaust elbow, but am darned if I know how to put an antisiphon valve in line between the heat exchanger and exhaust elbow since the elbow is inches below the sound enclosure top panel. Any advice?

The presence of seawater (sodium I presume) in the oil analysis is concerning.  However, if water had siphoned though the raw water intake, it would have had to fill the exhaust system, back up through the exhaust elbow and manifold, then through an open exhaust valve and into a cylinder.  It’s unlikely that occurred, if it had you would have experienced more serious symptoms.  Most gear driven raw water pumps include a telltale weep hole that will prevent seawater from traveling from the raw water side to the crankcase.  It would be worth checking to see if yours has this telltale.    More on that subject here.

We spent all our savings on a 2001 Jeanneau SO 43 DS, but on our first proper trip through Greece’s Ionian Islands my lovely wife caught the propeller around a line attached to shore, in a marina.  The cutter severed one side of the rope (prop to past bow) but not the other (prop to wall astern).

We immediately noticed a 20% drop is speed, for a given rpm.

We now have more bizarre side-effects, such as (after idling the engine to warm) once underway, after a couple of minutes the Engine revs are dropping by 20-30%, and then having throttled-up to compensate, about 20 minutes later the Engine revs race up by 20-30%.

Also, occasionally the engine will sometimes cut out when idling, and, I think, is idling too low when running.   This may be unrelated.

We’ve gotten an array of different answers from forums, but having just read your great article on transmission, thought you might know instantly what to look for!

We simply can’t afford to throw this problem at a Greek boat yard, because they vary enormously in quality, and we could lose whatever savings we have left on getting nowhere.

Many thanks for any thoughts on this.  Boat is wintered afloat at the moment, and I’m Happy to roll up my sleeves when the boat is next hauled out, but need to know where to start!

I’m going to offer a few possibilities.  The first, the prop wrap incident is unrelated to the engine rpm phenomenon, and it is simply a coincidence.  In that case, I’d carefully check the fuel delivery system for issues, because that’s where these symptoms point.  If you have a vacuum gauge on the primary filter (that’s the subject of a post going out on my website today) I’d like you to check that when this phenomenon occurs, especially the diminished rpm.

Does the engine reach its rated wide open throttle setting under load?  More on that subject here.  That rpm should be shown on a metal tag on top of the engine’s coolant expansion tank.  If not, that too could point to a fuel delivery issue, filters, injection pump or injectors, lift pump etc.  Now, if you don’t know if it ever reached this rpm during your ownership, it should have been checked at least at survey, prior to the incident, this will unfortunately not be a definitive test.

If the vacuum is normal under heavy load and when the drop in rpm is present, then fuel delivery probably isn’t an issue, however, vacuum gauges are only effective in determining issues between the gauge and the tank, they are not useful for determining the condition of the secondary filter lift or injection pumps.  If you have no vacuum gauge, just go ahead and change both primary and secondary filters.

The other possibility is the propeller itself, if it is a folding prop and it is not fully deploying, that would have an effect on rpm.  As soon as you are able, the prop should be checked to confirm it swings freely with no binding, and that the shaft is not bent.  Check as well to make sure the key located between the prop and shaft is intact, and not sheared, you should be able to see evidence of this without removing the prop.  Also, look closely at the coupling between the transmission and shaft, it too has a key, see if you see any evidence it is sheared or if there is movement between the shaft and coupling.  More on that subject here.

The transmission on this engine is a geared rather than hydraulic unit, so it can’t slip per se, like the latter can.  I doubt that’s the issue.  There is a flexible damper plate between the engine and transmission, it can be stressed by a scenario like this, however, it should be checked, there’s usually a window on top of the transmission bell housing where you could see some of it.  If it’s damaged you may see small rubber pieces under the bell housing.

I recently read your article on installing inverters. I am currently installing a Victron Multiplus in my sailboat and after reading your article came up with a question.

Do I need to run a properly sized cable from the house negative bus to the engine block? I’ve been reading your work for a long time, it’s one of the very top sources of marine vessel information available. Thank you.

Generally, ABYC Guidelines specify that all DC negative battery circuits be common, even if they are of differing voltages, i.e., all grounds are connected.  This ensures that a fault can’t energize a piece of gear without a breaker tripping or fuse blowing.  However, if you have the ability to parallel your engine and house banks, for emergency starting purposes, as you should, then it’s even more important that the negative of each bank be connected, however, they both do not need to be connected to the engine, they can be connected to each other, with a cable running from the start battery to the engine block.  The engine block should have only one negative cable connection point.  If the block is a current carrier, i.e., the starter and/or the alternator are not of the isolated ground variety, the block should not be bonded.  If it is isolated and therefore bonded, the bonding cable must have sufficient ampacity to carry fault current from the largest ungrounded cable, which is usually the one supplying the starter.